Okay the weekend is upon us and here is a bit of news that has been reported from a few guys over the last couple of days. We had a fly fisherman in the Joppa area. He was fishing the incoming tide and close to high tide he said he saw a lot of nice fish. But, he couldn’t get them to bite anything.
Also would like to post a picture of Hunter Currier who is down visiting his grandafther Russ. They headed out in the boat Tuesday before daybreak with a few eels and Hunter landed this 26-4 pounder right around daybreak. 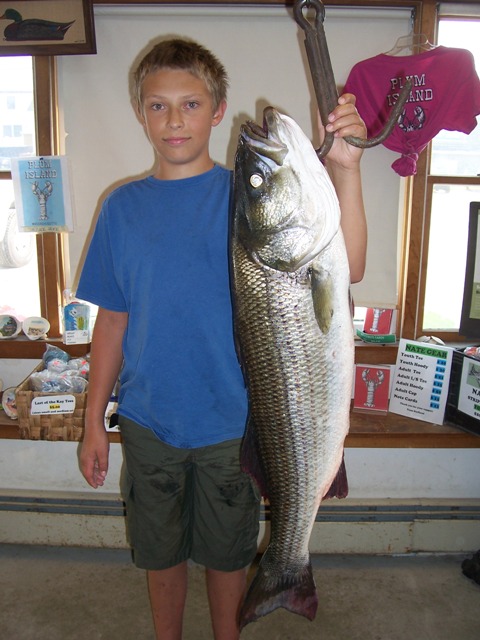 This morning we had a bit of news from the oceanfront. One of the guys caught some bluefish at the center. These guys show up for day break and fish for a few hours. Day break can be the key to catching the bass and/or blues that run the beach chasing bait. Further down the beach we had another fisherman (near the refuge)catch some stripers, but he only hooked into a few due to them being further out than before. He could not pursue them down the beach due to the beach closure, but told us that the boat guys that were out front of the refuge lot were catching.
~~~~~~~~~~~~~~~~~
And one last thing before you go that we feel you all need to be aware of. The Marine Fisheries had put out an advisory on some skin lesions that are showing up on some of the bass. Please follow this link to read more…………