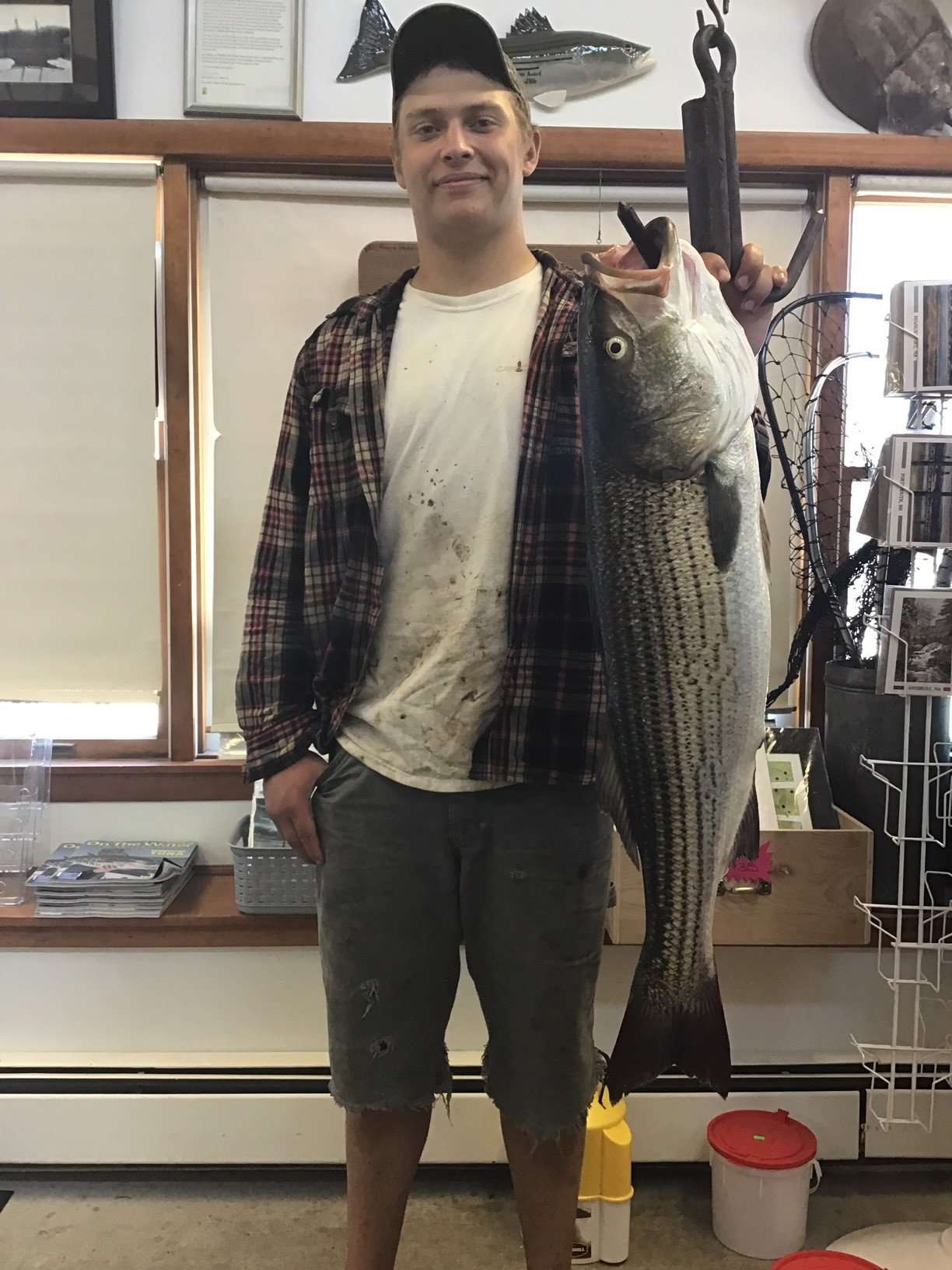 The summer of the bunker continues to play dominance up and down the coastline. The numerous schools of these baitfish have caused much frustration with some fishermen who have had to spend time hoping from one school to another looking to see if the bass are underneath them. But for others, they have done well. And still others have been lucky enough to see activity from other marine species such as whales and tuna that have been feeding off the bunker. In fact the whales are back off Salisbury Beach and can be seen on the Salibury Sunrise Facebook feed.  Check it out!https://www.facebook.com/Salisburysunrises/

One of our lucky fishermen that caught a striper on a pogie this past week is Hunter Currier. Hunter is grandson to Russ and Judy Currier who have summered on the island for many years and have been friends of the family just as long. Russ is an avid fisherman and brought up his kids and grandchildren fishing the area. Hunter was down visiting from Maine and was out with grandpa when he caught this fish

Other boat action reported to us this weekend starts with a confirmation that there are now some bluefish in the area. Brendan (SBT) and Allie were out in the Plum Island Sound  last night using eels to fish for stripers when this little guy chomped on his eel. So you have been warned! But on the other hand, these guys are fun to catch on light action!

Mike MacCormack  (SBT) got the chance to go out with Ed and Andy (SBT) Kelly yesterday. They planned a deep sea fishing trip and headed out early am before sunrise. Lots of haddock, a big toothy wolfish that went back into the deep blue sea and some visits from a couple of Minke Whales. All in all a great day to be on the water.

Now some surf news. Some surf fishermen have seen a slow down in striper activity. Again the thought is that they are so full of pogies that they are just not hungry. But everyday is different. Reports of some nice fish off the jetties and inside the mouth of the Merrimac continue to be reported to us. Friday Duat Lu from Lawrence came in from fishing the Salisbury side of the mouth. He caught this fish while using a Guppy Lures top water pencil popper.

Also had a fisherman in yesterday reporting to us that he had a big fish off the jetties. He had it at the rocks and tried to lift it with the rod but the line broke. Okay, so this is where a lesson is going to be injected. If you are using a surf rod (especially graphite ones) off the jetties and try to land a big fish by “lifting” it there is a good chance that your surf rod could break. They are not meant to be used that way. If the fish jumps and put an unexpected heavy bounce in the rod there is another chance of the rod breaking.   If possible move the fish down to a safer place that you can get down to reach the fish, use a heavy mono leader that you can grab and bring the fish up with, or we have some guys that bring out big landing nets. Another choice if you are lucky to have more than one rod, something with fiberglass in it will have more give and allow for some “lifting” However you land your striper be careful of dragging him over the rocks if he will be heading back into the water.

Other surf fishing news. The Parker River Wildlife Refuge is now allowing night fishing. It is only allowed at the southern end for now until other lots get opened up. To get your permit stop by the main headquarters during open times or at the gatehouse at the entrance to the refuge. If someone is manning the gatehouse you can get your permit there.

And with more and more of the refuge opening up and now some night fishing areas also open and then some drive on to follow we will have a lot more bait fishermen coming in. One thing we have had an issue with these last few weeks are sea worms. The size and quantity of sea worms and or blood worms (when available) all depends on the moon. Yes the moon, the moon affects the draw of the tide. When we have Full and New Moons the pull on the water is greater. what the means for us is that the low tide is bigger than average, which means the diggers can get out further, which means more worms and usually bigger worms. and then the opposite is also true. When the moon is at its weakest pull the tides barely shift and the diggers cannot get out and get any quantity or size in worms. So we do apologize for any inconvenience but it is out of our hands sometimes. Better tides are coming! Here is an interesting piece to read to help explain.

But have no fear, whatever the worm situation is our boy Finn is always keeping a close eye on our worms for us!