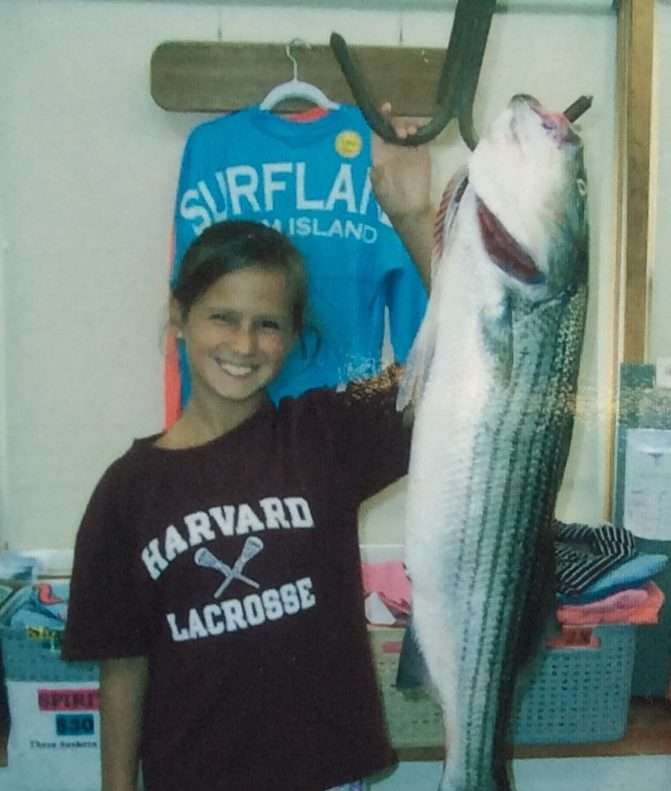 It’s been a week since our last report and sorry about that. It isn’t because there isn’t anything to write about, it is quite the opposite. There have been a lot of small fish being caught again. Seems like a new school has moved in and are hanging around the area. But there are still plenty of big fish being caught also.

Reese Bromby from Newburyport , MA weighed in this 16-8 pounder on 8/12. Her family has a boat at Riverfront Marina and hit the Plum Island Sound and used the gold olde tube-n-worm to catch Reese this fish. Way to go Reese ~ Girls Rule Boys Drool! This 9 year old will be going into the 5th grade and has caught a fish bigger than most boys her age (and older)! There have been a good many fish caught at this end of the island so if you have a boat hit the Plum Island Sound this week on the early high tide and try the tube -n-worm. 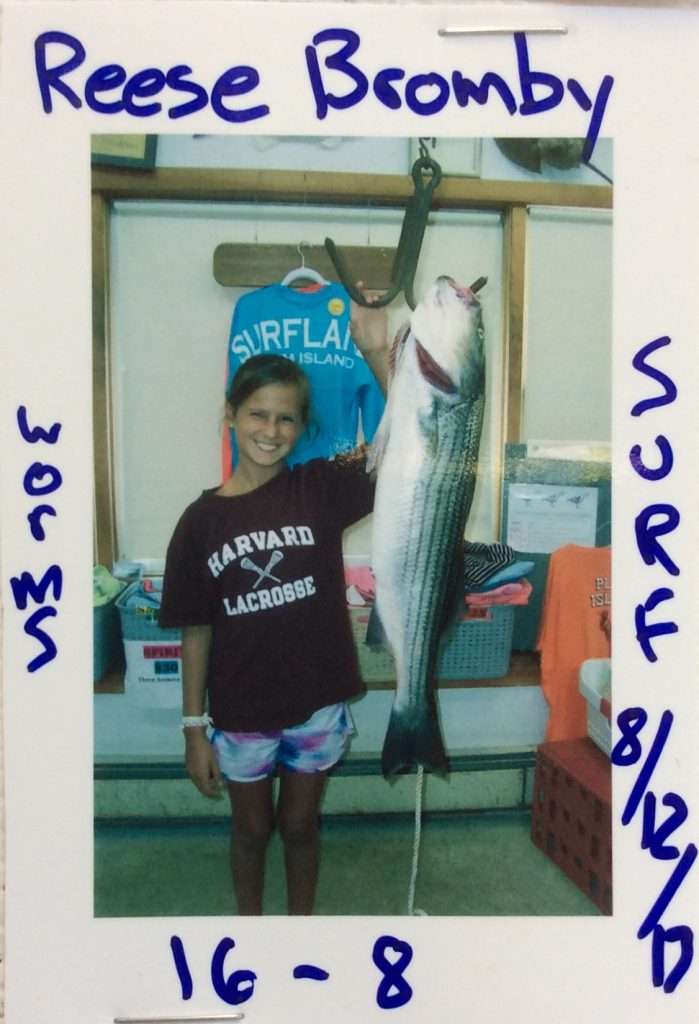 We still have the pogies up off of Hampton Beach. Some reports had them moving further up the coast but on Friday we had Jim & Victoria(“Vic”) Godfroy from Dracut MA prove otherwise. This father and daughter duo went out in the boat, snagged some pogies, and then hooked into fish. Jim weighed in a 20-8 pounder and Vic weighed in a 21 pounder. Again…..girls rule! 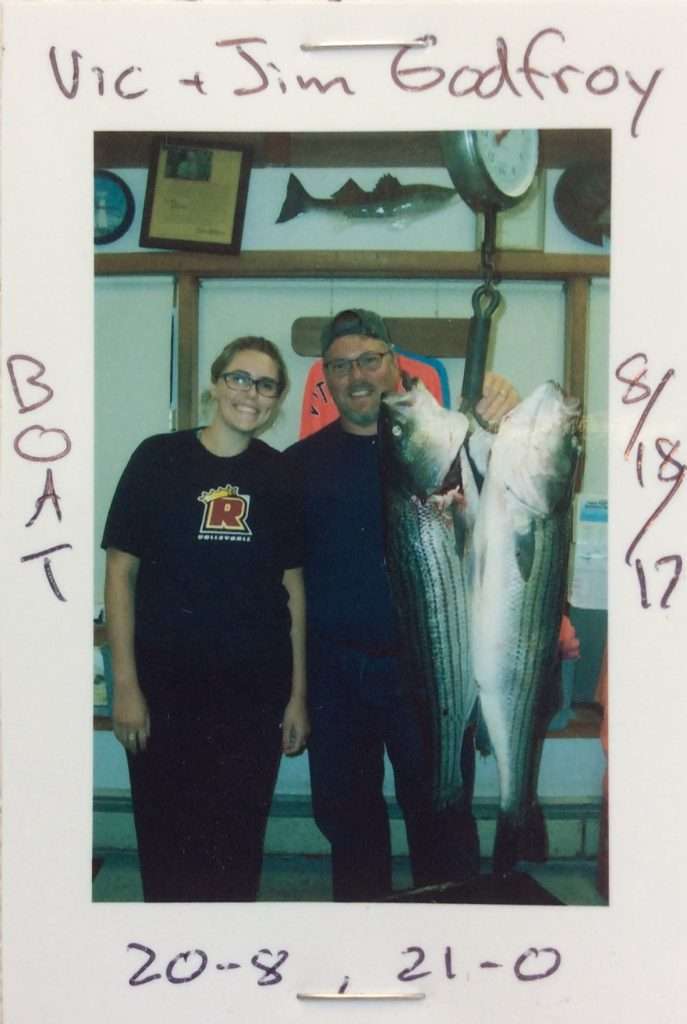 Now onto some beach news and surfcasting info. The night bite has definitely picked up along the refuge. There are some big fish to be had if you have the time to put in. Whether it is throwing live eels or plugs at night around the southern end or using clams and worms for you more sedentary fishermen up and down the whole length of the PRWR the fish have been biting. This week should be very productive for the early fisherman that love to get the worm bite going. And for the night high tides we should hear about some bigger fish being caught. That is not to say that the rest of the beach isn’t producing. It’s just that when the PRWR opens the beaches everyone loves to be down there…it’s like unchartered territory from the year before and people need to check it out! I have had two groups of fishermen tell me about all the little fish they have caught this past week just waling up and down the beach casting lures. And as always, soft plastics are number one for daytime fishing with some metal coming into play also now that we have heard a few reports of a bluefish here and there. And then there is the river. That can be tough on weekends with the crowds and the boat traffic, but the fishermen on the jetties have been doing pretty good with the occasional bluefish in the mix. Chunk mackerel is popular out there. (See photo below)  If you like to stay on the beach then use clams and worms near the Captain’s Fishing Parties. They usually have a lot of schoolies hanging around looking for scraps from the boats. 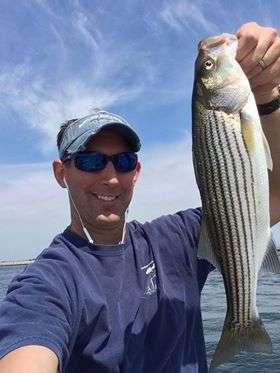 Now to answer some questions we get about the refuge. You can also find information on their site and FB:
We shared on Facebook the news that the refuge has now opened up all of the beach and a new trail. That means that the walk on night fishing has also started. So, some of the rules. You must get your permit to be on the refuge at either the headquarters when they are open or at the gate when someone is manning it. Do NOT show up at the last minute and expect to get your pass. Sometimes the gate is manned by volunteers and they are not always there until sunset. Please plan accordingly. Also as most of you know, you must be on the refuge before the “in” gate closes for the night. And that you will be able to get off anytime you need to. The rule of thumb for the opening and closing of the gate revolves around sunrise and sunset. And as the day light get shorter so does the timing of the gate. The cost of the daily entrance for daytime is $5. The annual permit for the day pass is $20, You must have the annual pass and then also purchase the night time fishing pass/sticker which is $10. So for $30, you get a pretty good deal. You can go in during the day as long as the PRWR isn’t  full and also have access to night fishing. Do you know what the lots around us get per day on a weekend??? $20! This is for the whole season. Good deal!!!

And finally, we know how upset some of you are about the drive-on permits. Yes, I know. We have heard from a lot of you. But like one of the fishermen said. “We’ll be getting a lot of exercise this year”. You can still park your campers in the lot and fish overnight??? I know it isn’t the same thing but it is what it is so lets make the best of it for this year and keep fishing!

Oops, one last thing. I need to vent about this! I also want to say that we are getting a lot of reports of trash being left behind by some of the fisherman, especially some of the night guys.  I have some fisherman that have been picking up stuff left behind by others. Not saying it is always fishermen. Some could be left by other visitors to the park so this goes out to anyone reading this post. WHAT IS WRONG WITH SOME OF YOU???  Do you really want to ruin it for yourselves as well as others? This is not your personal yard, there are rules and most important common sense to follow. This is a beautiful place and also a refuge for animals and we know what some forms of trash can do to some of them so please, please, please pick up after yourselves. If not you will have to answer to me, Liz and you all know what a bitch I can be! That’s all.