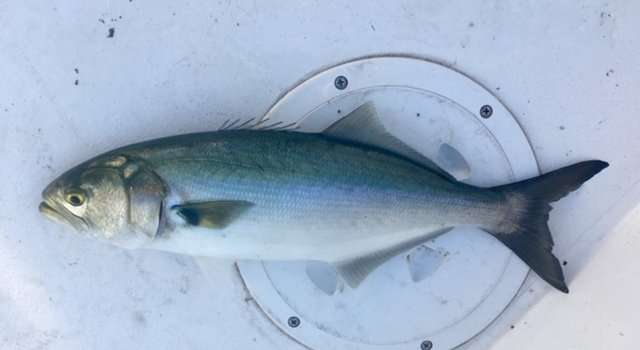 There are bluefish being caught around the area. NOT big ones, but we are so excited because it’s been a long, long, ……long time since we have seen one in the shop or heard of any being caught in the area. Long time family friend Dale Hubbard sent us this picture and report last night. And when you read the word Bonito, yes believe it. There have been small Bonito being caught, mostly when Mackerel fishing and they are small, but yes it is Bonito!

Liz – This is Dale Hubbard from the Parker River, your Mom &  Martha have known my brothers & me for 40 something years. I got some bluefish & bonito off of Plum Island in front of High Sandy this morning (SUN) early … wanted to send you that report. My 1st blues in years!

We also had Shawn Nourse from Derry NH in on Sunday morning. Shawn did and overnight on the PRWR on the southern end where he caught this 8-8 pound striper on mackerel. He then moved up to lot 3 where he also caught a striper but also caught these two bluefish, also on mackerel. They aren’t very big, but we’ll take it! 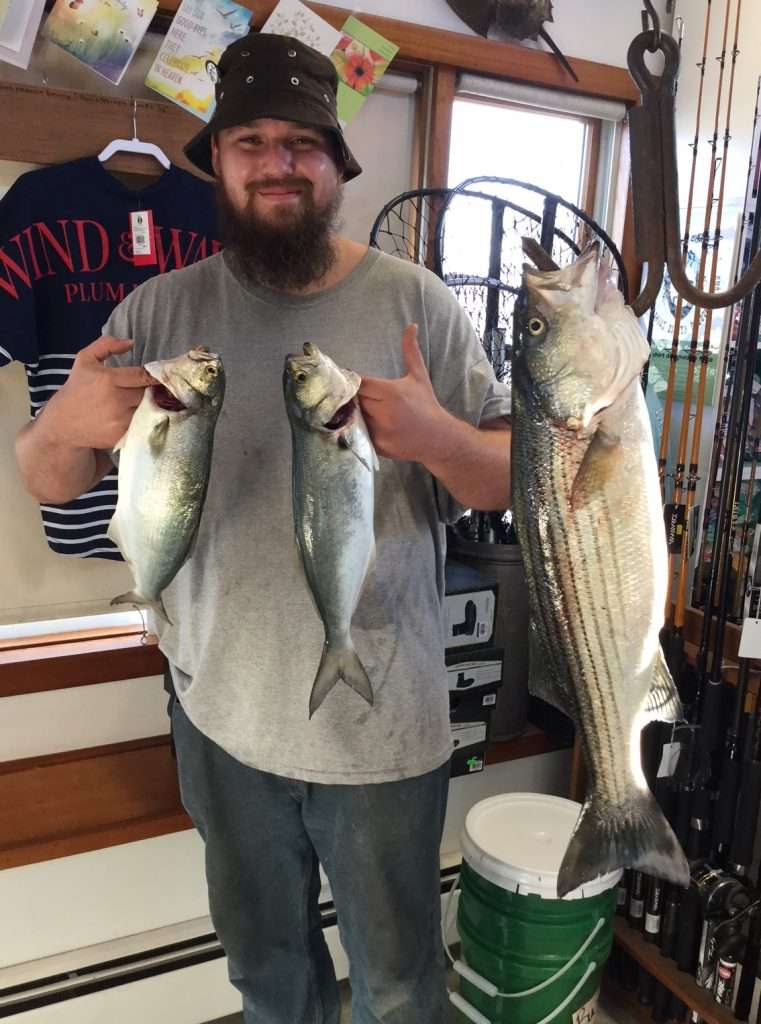 On Saturday, 9/15 Scott Tyler who was up on the island from Tewksbury, MA weighed in this 9-12 pounder that he also caught on mackerel during the outgoing tide at lot 3. It was just about mid tide when he hooked this fish. 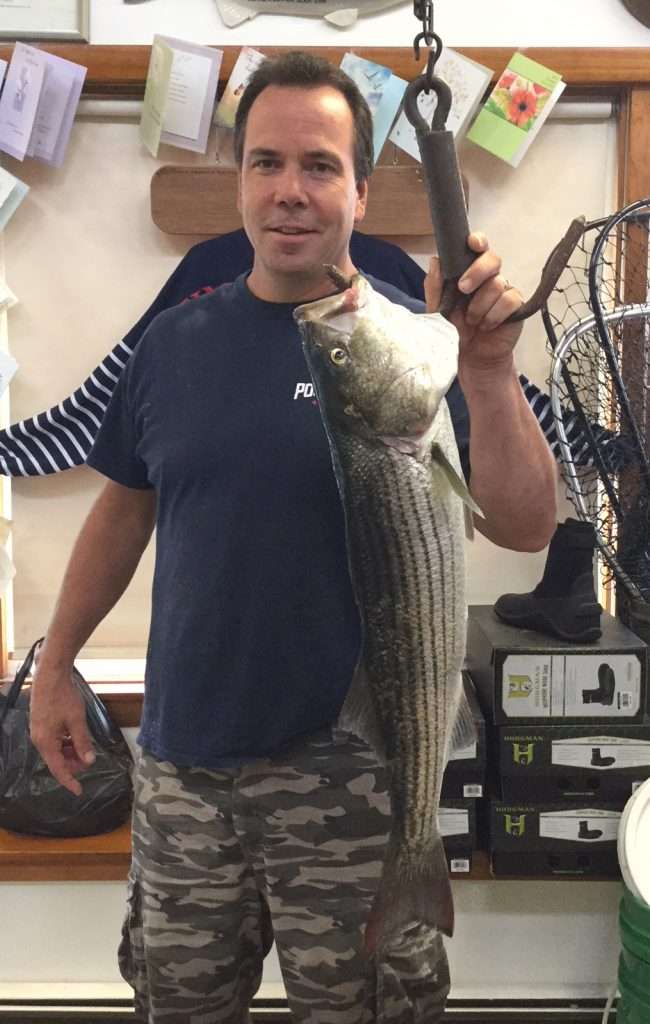 And just now Rob McFadden came back from fishing in between lots 1 and 2 on the refuge and he weighed in this little guy. This fished measured 29″ but only weighed in at 6-8. This fish was super thin….too thin. We were shocked. All the fish in this size range have been little fatties this year. Wonder where this guy was swimming in from and no wonder he was so hungry! Maybe a new school has moved in??? If Brendan and I hadn’t seen it with our own eyes, I wouldn’t of believed it. Rob fished the top of the incoming tide and wasn’t on the beach long before he caught a smaller fish first (which had a belly!) and then this keeper sized striper. All on mackerel. 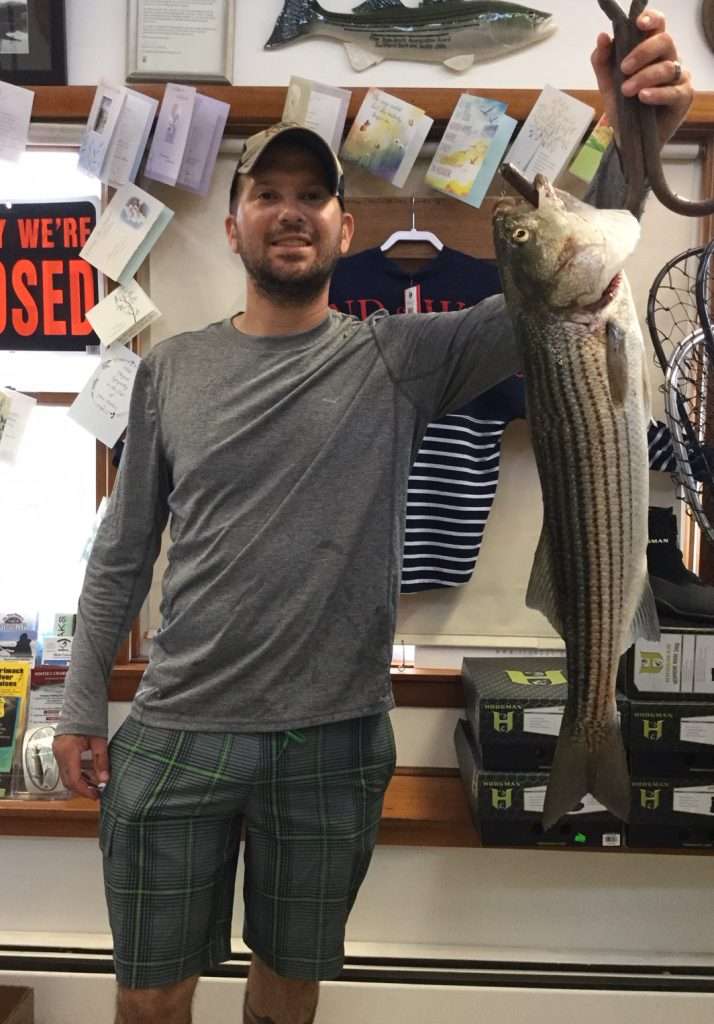 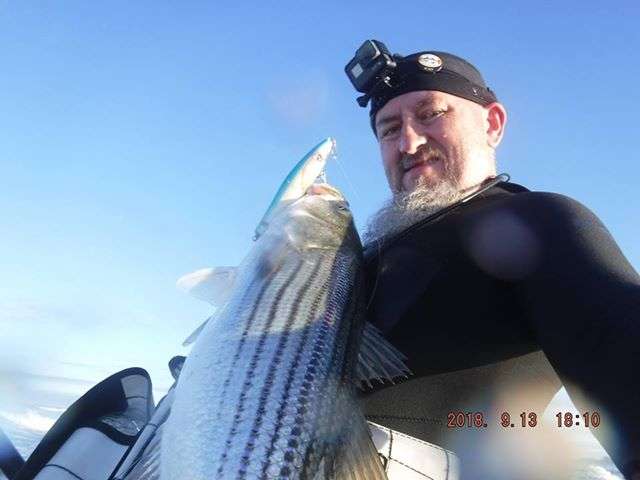 After a long spell of not catching fish during the storm Brendan at the shop has finally found some fish. This past week he has seen fish anywhere from 26″ to 42″. Although most of the fish have been caught on eels he has also been using a Blurple Danny lure, and a NTA Needlefish. He has been fishing all along the Island, a few nights when he couldn’t make the gate at the Refuge he fished the sandbar in front of the shop and had a nice pick of keeper size fish.

Prime Fall fishing is here. Big fish are here. You have to be here to catch fish. Where are you?

***Did anyone hear about the swordfish caught offshore about 4 miles out. We were told it was 110 inches. This summer just keeps getting stranger and stranger!