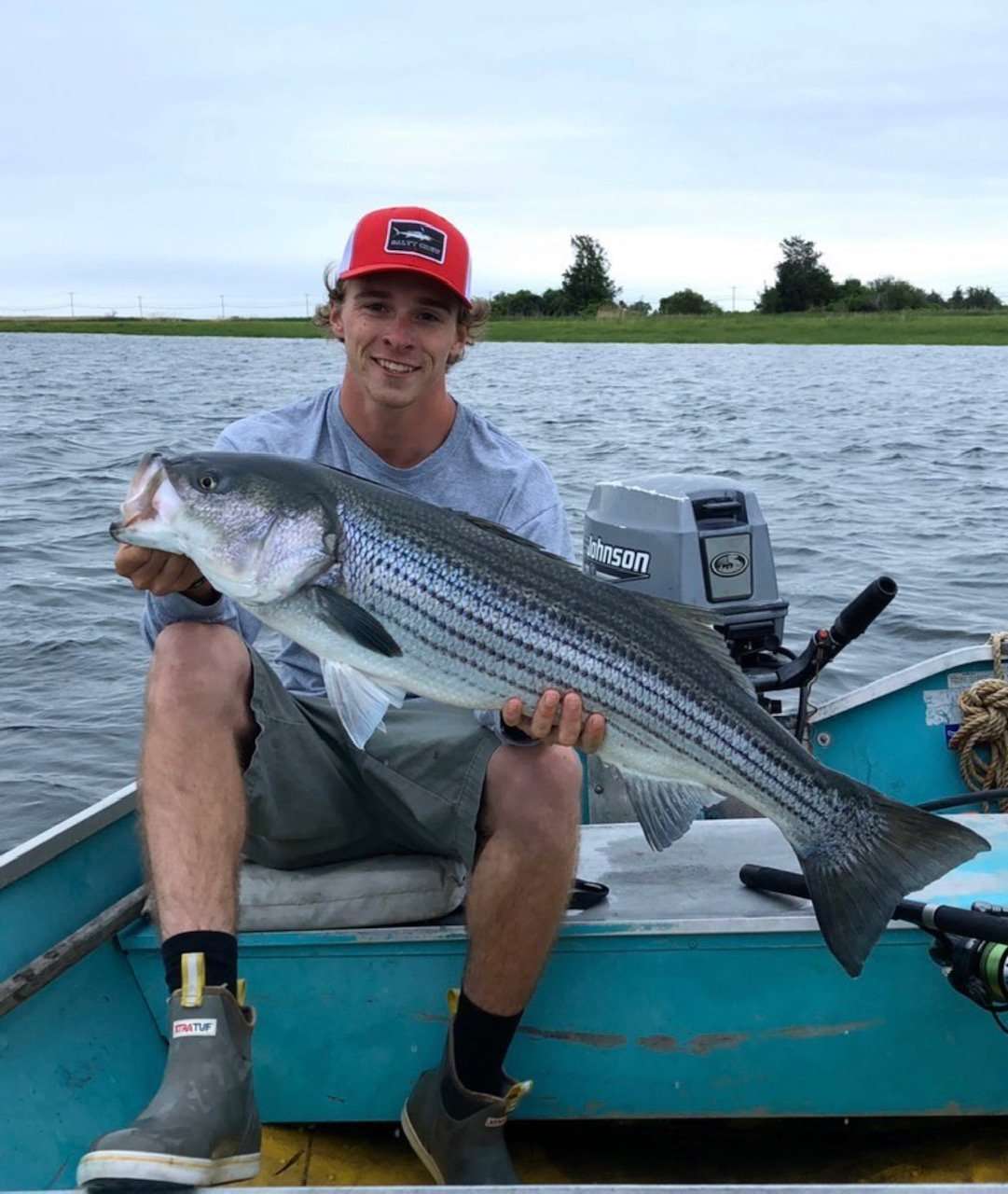 15 Jun Along the shore

Finally a few moments to write up a quick report before the fresh clams arrive. It has been a hectic time here at the shop. Lots of new faces and a few changes in the way we now have to serve you, but everyone is taking it in stride and we thank you!

The amount of small fish around the area is crazy. There have been reports of fish as small as 8 inches. These micro schoolies are a hungry lot and whether or not it was chasing it for fun or trying to eat it we had a customer catch one of these little fish on a Doc Lure. The lure was as big as the fish or the fish was as small as the lure. Either way you look at it, it is just mad how these little guys are going after stuff. Most people are having their best season ever and are happy catching the small schoolies on light tackle.

Although there have been a few slow days, the majority of the time the fishing has been great. Again low tide inside the mouth of the Merrimac River has been producing fish daily. The top lures have been soft plastics, but other things like metals and swimming lures have come into play. The oceanfront has also been producing fish during the top of the tide in to the outgoing and also lately the low tide has seen action along the beach. If you aren’t a lure guy, then opt for Sea Worms, Clams or Mackerel. It is good to have a variety because just like us, sometimes different things appeal at different times. But if you had to choose one……..our dad Ray used to say “worms are king!”

The guys in the boats, kayaks, canoes, paddle boards, etc have been doing extremely well in Joppa Flats (the body of water that you see on the way to Plum Island) The tube-n-worm has been top choice for those that like to troll, especially the “Nixon” special. The guys that like to cast have been doing well on top water action lures like the Jumpin minnow, a variety of spooks, and some of the new Yozuri top water lures have been preforming well. And the Slug-go has picked up action as well. Cast this soft plastic towards the banking and drag back towards you and its like an eel coming out of the grass. If there is fish there, they can’t resist giving chase!

Other areas like the Plum Island Sound are also loaded with little fish. A favorite of this area can be almost anything as long as it is chartreuse in color. Bass Assassins on little jig heads will do the trick if the fish are down deeper. But if you are out for the early morning bite then start with some top water lures. (like stated above for Joppa).

Now don’t get us wrong. There are big fish around. There is a lot of slot sized fish in the area. Some of the guys have done very well along the oceanfront or off the jetties with this size range. It just that there are so many small fish that you have to get through them first to find the bigger fish. These little fish get to the bait fast so most times they are the ones you will catch. But don’t give up because we have some great tides this week for fishing the oceanfront at night. Start at dusk and fish through the top of the tide through the turn. IF you like to use bait then again worms, clams and mackerel should be on your shopping list. If you want to walk the beach start off with some top water action for dusk and when it gets dark switch over to some swimming lures or better yet live eels.

So we have a couple ( Federico and Christa) that fish a lot and like to send us reports. The reports are fantastic and this one that is posted below was especially good since Father’s Day is coming up. So we decided to share it with you all:

I thought I would send you a quick update/recap of our time fishing this weekend.

Christa and I started the weekend by fishing the ocean front high tide on Friday evening.  There was moderate activity, but it was not as active as some of our earlier outings.  We caught several stripers ranging from 10” to 26”.  Catching that 26” was fun and we hope it is an indicator of days ahead.  We caught the fish on soft plastics, tins, and chunked mackerel.

We returned to the ocean front on Sunday evening to fish the high tide and enjoy the lovely day.   This time, we also invited Christa’s father (Lou) to join us.  Lou has been a fisherman for years and has spent most of his time on the waters along the tip of the Cape.  He has been most successful catching blue fish and has been chasing stripers for years.  Luckily, we were able to put him in the path of a 22” striper that turns out to be the largest he has ever caught.  We will continue to invite Lou to join us throughout the season in hopes of seeing him catch his first keeper!

Noting the event, it seems like Mother Nature was aware of our day as she presented us with a blue fish just before we left the shore.  In a way, a symbolic tip of her hat celebrating a man who has spent much time along her shore.

Attached are a few pics marking the day.

YES!!! That is a bluefish that you are looking at. There have been a few reports of some mediums sized blues along the beach and in Joppa. So make sure you have a few steel leaders on hand!!!

And here are a few photos from the past week that have been sent to us: