With the warm couple of days the shad catching has increased, most being at the regular spot at Rocks Village. A customer came in yesterday to buy some herring. He claims there are some decent holdover stripers way up the Hampton NH tributaries. This is a highly dubious report, as one of the three reporters misidentified  a striper as a haddock while looking up at the photos on the wall. Historically there have been some big fish up there. Kay reports one fifty-pounder up by the train trestle in days gone by.

The most popular way to catch the shad that are coming by is using small shad darts. Some guys will rig two, one heavier on top and one smaller one at the bottom. Some other guys rig a very small dart on the bottom, with a split shot up a little ways so they can cast. The darts should be very close to the bottom. If you’re not losing darts you’re not close enough to the bottom. Kay notes that shad aren’t looking for bait, but the shad dart just annoys them into striking.

Sure the shad are running, but here’s a picture to excite you of what will be coming in the next couple of weeks. 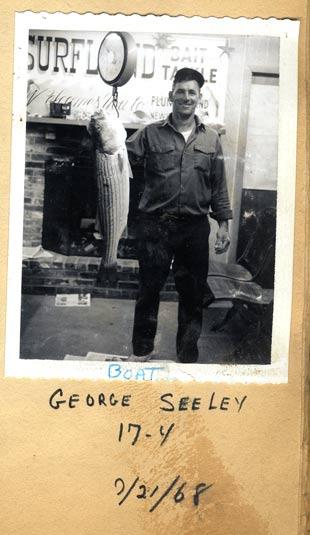