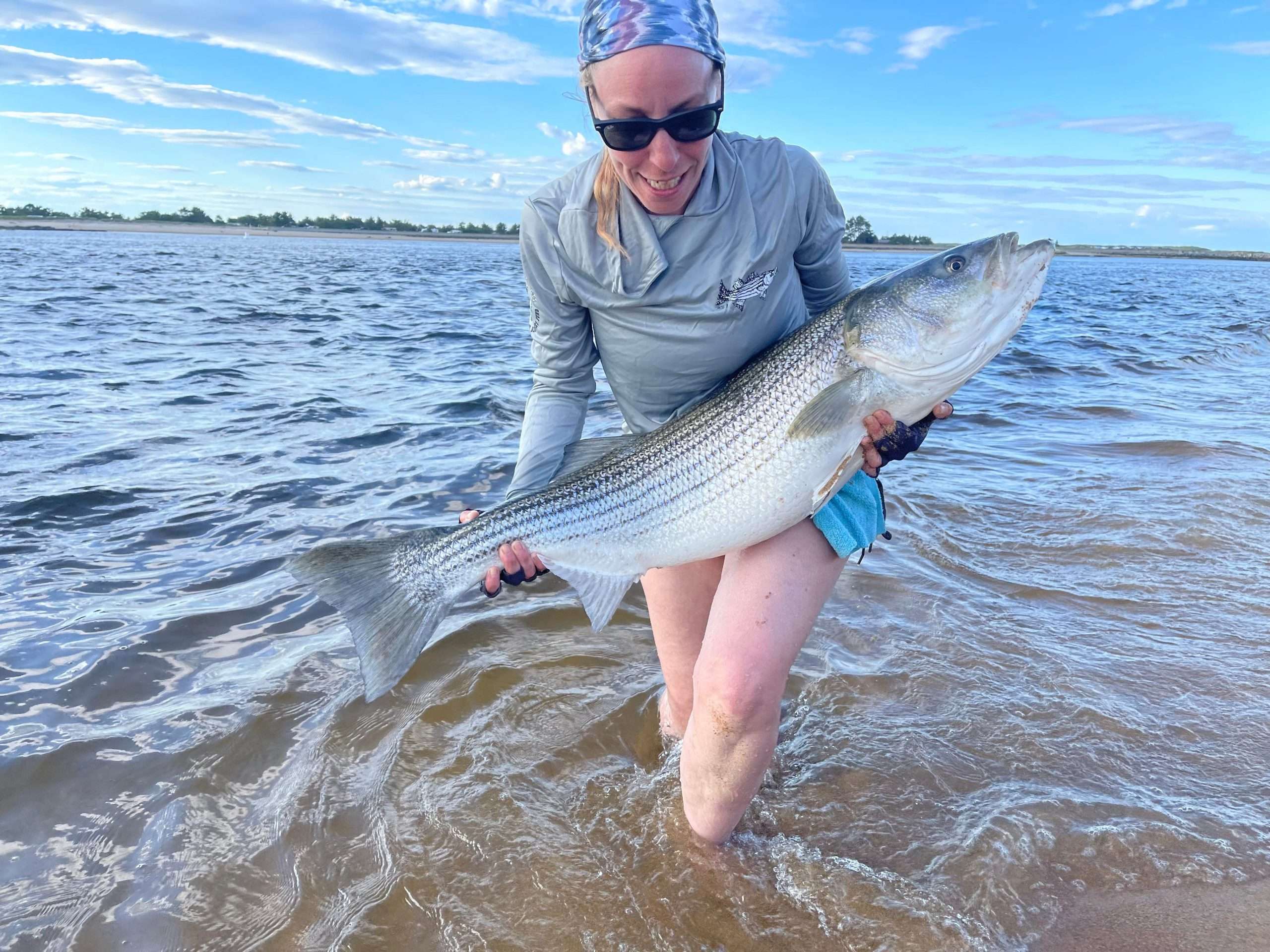 Got a note and a picture from April Provencher who was on the island this past week:

HI! I spent a couple days on the island last week, picked up  some clams, a new rod, a couple shirts fat Surfland! Wanted to share this catch with you! 41″, caught at slack tide on 6/14.

June is and has always been one of the best months to fish the area. The only way to describe the fishing this past week (let alone the weeks before) is INCREDIBLE! Most everyone that has come into the shop has been “catching”. Day, night, sunrise, sunset, you name it someone has caught a fish during those times. And then the next question that always follows “Are the fish biting?” is “What are they catching them on?” And this is where it gets hard for us sometimes. Because the answer right now is just about everything. Because it all matters where you like to fish, what the tide is, time of day, etc., for us to respond accordingly.

JOPPA FLATS: If you have a kayak, boat, canoe, or something else that gets you on the water during high tide there are several things we would recommend. Trolling around the Tube-n-Worm has been productive for years. All you need to do is put a worm on the end for scent and off you go. Unweighted soft plastics are also a popular choice for many fishermen on Joppa. Topwater lures such also have a lot of success out here. Then if you like to bait fish, drifting some chunk (or whole) mackerel or herring can put you onto to some fish that are hanging around the bottom where it can be cooler on hot days.

UP RIVER: Up the river in the Merrimac we tend to suggest chartreuse as a color to use along with other brighter colors along with the old standard of white(pearl, bone) . The Merrimac can get kind of murky sometimes so the brighter colors can show up a bit better depending on the conditions. But some of the same stuff that works in Joppa, works up and down the whole river.

The MOUTH of the MERRIMAC: Flip a coin. IF you like to use bait we then like to recommend worms and clams inside the river up near the party boats. If you are a jetty rat or like to fish close to them then mackerel has been a popular choice along with clams. We’ve even had guys using live eels with success. Lure fishermen, the choice is plentiful here. The soft plastic paddle tails have been a hot item for years now, but it was nice to see also that the return of the sand eel type soft plastics have also been producing. Swimming lures off the jetties are popular as well as top water depending on the time of day.  Boat guys, if they are lucky enough to find mackerel, then live lining mackerel has been the way to go. But as we all know now, the mackerel in numbers have not been in close. Most of the large schools have been way offshore. But here’s hoping the wind will push them in, or something else will chase them in!

BEACHFRONT: The front beach has a lot of ground to cover. Again, everyone has their favorite bait to use, but i think what has surprised us the most is how popular chunk mackerel has been. Worms, clams, and mackerel have been producing, but the popularity of the mackerel has been surprising. Because they are scarce? Who knows. But again, tide and time of day and conditions are play a factor in what bait to use. Worms have always been popular around parking lot 1 in the PRWR. Clams and mackerel at the southern end, but we still have out worm fishermen here! SO, when we say take a variety, we mean always take at least 2 choices because you just never know what a striper will feel like eating! Lure fishing: again just like the stuff that is working in the river also works out front. Soft plastics, Buck tail jigs, swimming lures, live eels, top water lures, and even metal. Different things for different tides and times of day and weather conditions.

BOAT BEACHFRONT: Have heard of some pogies starting to show up.  Remember there is no more snag and drop. snag and switch over to a circle to live line your pogie. If you want to use lures then try a top water spook or some other top water action if the fish seem to be on top. IF they seem deep try some swimming lures or some jigs or heavier soft plastics to get them up. You can also troll the Tube-n-worm out front along the ocean.

FLY FISHING: Again once the wind died down this spring, the fly fishermen came out. Most of them have also been happy with the season so far. Popular spots for fly fishing (depend on the breeze that day) are Sandy Point, Mouth of the Merrimac (Plum Island side as well as Salisbury), wading out at Joppa Flats at low tide (be careful here!), the front beach (also when the wind is right), and other spots along the coastline. There is no reason to just make Plum Island your spot. Salisbury Beach and Cranes Beach are also producing with plenty of space too spread out.

REMEMBER: It’s called fishing not catching for a reason. Sometimes, the things we suggest might not work for you, other times we are spot on. We cant always be right, but will try our hardest to put you on some fish!

In concluding this report today we would like to share our vote for “Best Catch of the Day”…… Steve’s earlobe!  Caught on a boat with a rusty, yet sharp lure. Steve’s lucky that “Dr. Clay” was in the shop to assist with the hook removal. So, a few lessons here. First, if your lure is snagged in some grass along the banking don’t try to yank it out. Second, change out rusty hooks before fishing season starts. Third, make sure you are up to date with your tetanus shot!! Even though this doesn’t even make the top of the list of the things we have seen in the shop as far as hooks in flesh we thought it would be a good reminder for people. Be safe out there! 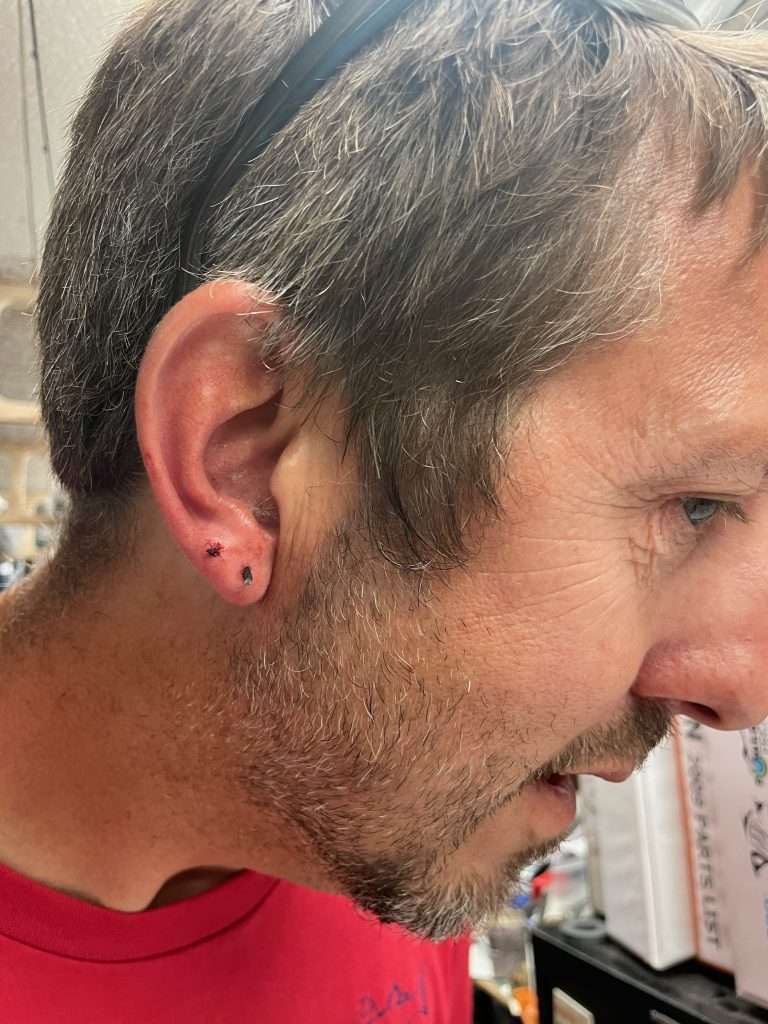 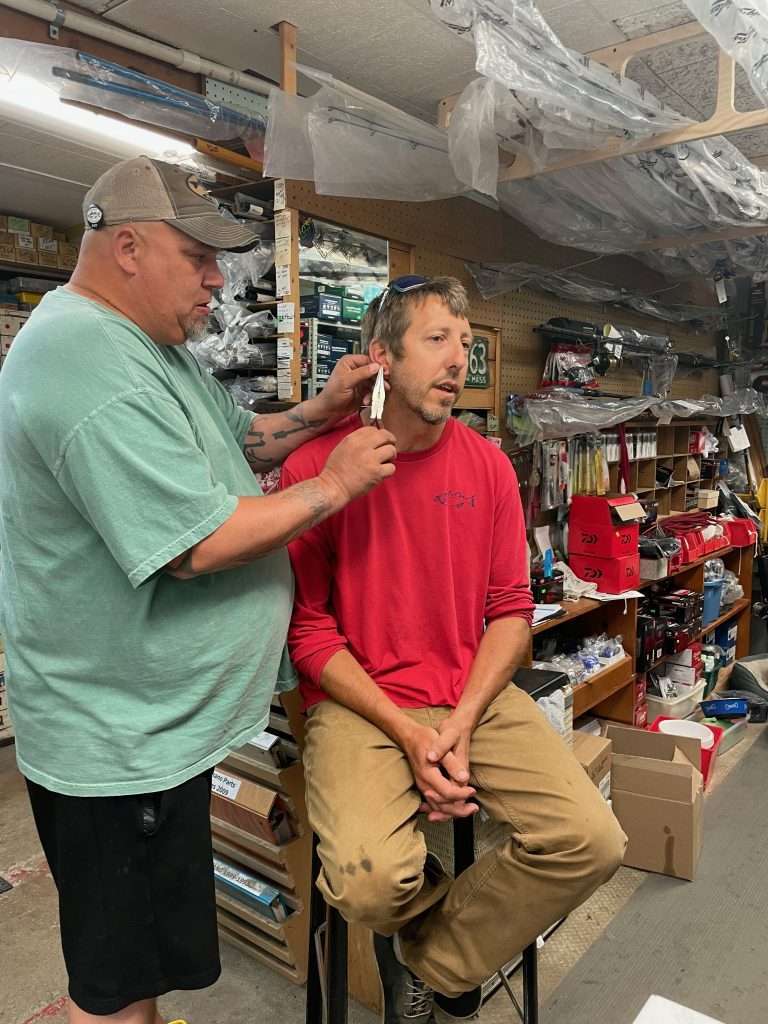 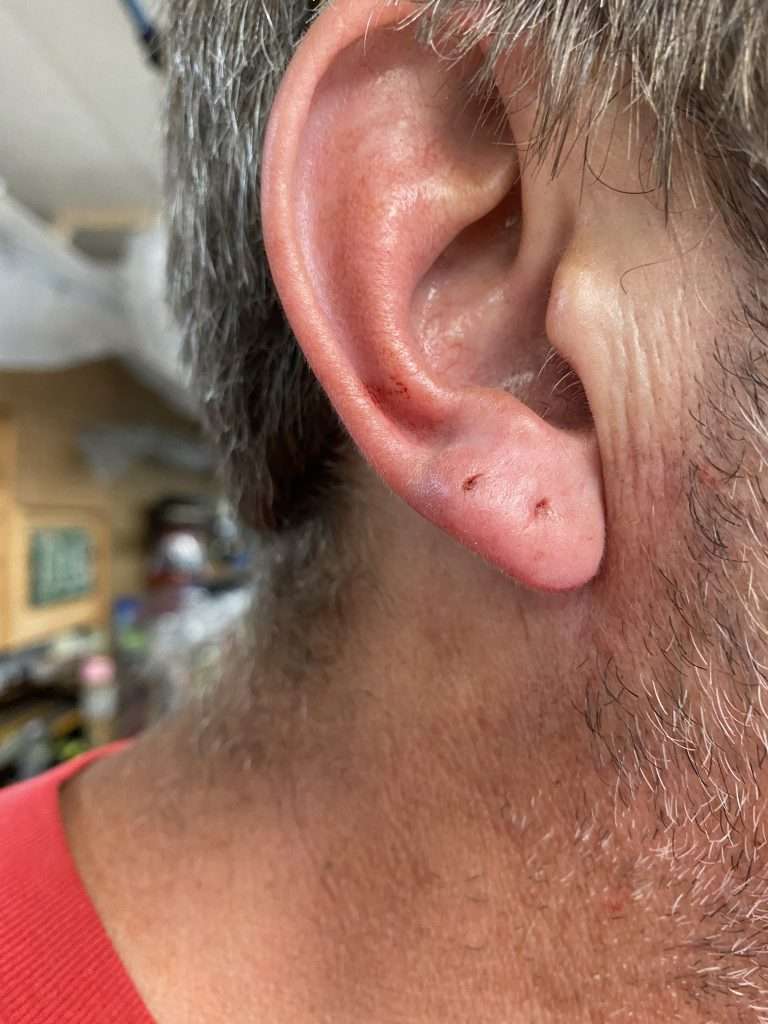