Well we have a mixed bag about the weekend. There seems to be fish here off and on. Some days we have guys come back from low tide in the mouth of the river to report some small stripers and a few blues, other days a few blues, and other days nothing. This has been the routine for the last week or so. We do know that Saturday was the best day in the river for low tide……small stripers. We have a few guys fishing the ocean side of the jetties and they are also having luck some days and no luck others. We also have a group of youths who have been coming in and buying little shad fish and they seem to be doing well up and down the beach. Had one guy come back and tell me they were doing nothing and then these kids showed up and were casting these little fish and started hooking up right in front of them. They came in search of that lure! The oceanfront now that parking lot one has opened is producing some fish. Saturday, Mark Sahady from Malden fished the daytime high tide with clams and got a 15-15 pounder. The night fishermen that are fishing the front beach from the center south are again picking up a few fish. They seemed to be having the most luck. Bait at Night! 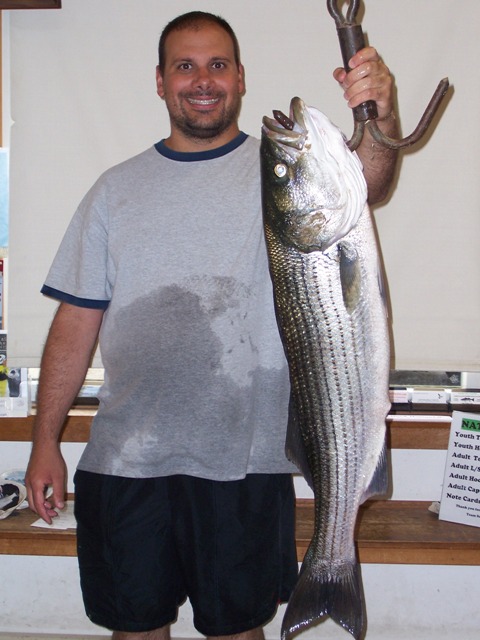 Sunday, the Marshfield crew was out in full force again. This time it was “guys day” on the boat. Grandpa (I’ve got to find out his name!) took grandson Aidan and his friend Kevin out on Joppa. They left the basin just before high tide and headed out to troll the ever popular tube-n-worm around Woodbridge Island for the top of the tide and the start of the outgoing. Kevin Buckley hooked into this 9-3 pounder. “Grandpa” again said that there were a lot of fish around the island. They saw a lot of small fish and fish in the 24″ – 28″ range and a few over, like Kevin’s. Everyone needs a grandpa like this. Great to see the kids fishing! 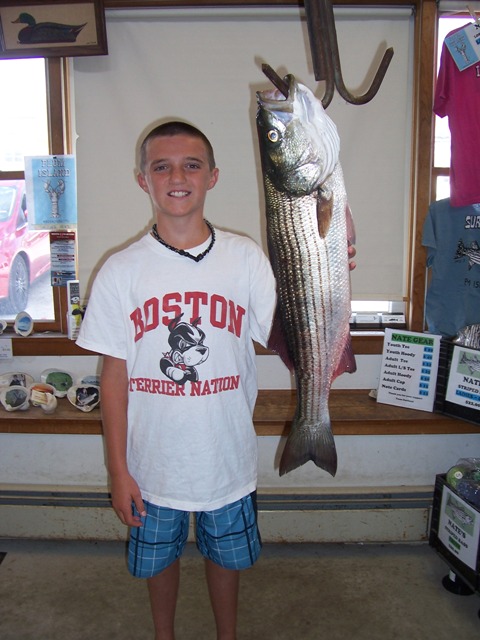 And finally, the “word” from Ed Kelly……..(he was down Sunday am with the wifey)………….”I fished a few hours in the am. Got two fish, one a keeper. Lots of bait & birds”
There you have it. The man speaks!