Isn’t August usually the month of fishing doldrums? Well not this year. The feed is on and has been for a few weeks now. Some great fish on the dropping tides in the river and on Joppa. Even the beachfront was hopping yesterday with our friend Tom reporting a 3 hour blitz within 2 feet of shore yesterday afternoon. And that was the rising tide, so who knows. The beach blitz could be from the strong onshore wind we had all day, and the monster fog that socked in the river and coast around the island.

This early morning was great too, with a number of large keepers in the river, including a nice 40″ bass by your author Stickman. Live eels are wicked fun.

Heres a weigh-in from this morning. And don’t forget to send in your catch and release photos to stickman@surflandbt.com 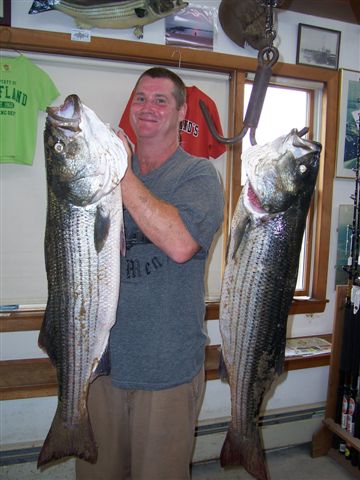 One fish caught on clams, the other sea worms. These fish were caught at
dead low this morning. Sean, and his fishing buddy also had two other fish
on , but then lost them. After that it went quiet.