Today’s intelligence:
One of our customers gave us a report from last night and this morning. Fishing from the beach with worms all night, he caught 20-30 school bass, with a number of keepers mixed in. When daybreak arrived, so did the bluefish, which were hitting the surface on the beach just at first light.
.
Another happy bluefisherwoman is Emma M., who got her first bluefish ever casting the beach. Here dad Paul wrote me this,
.
“Finally decided to bring my 11yr old up to PI for a little sunrise Blue/Striper fishing this morning (Monday, 8/13).
.
The weather was great and we enjoyed the morning – and Emma’s quick
We walked the beach casting my SP Minnow Green Mac, and her 2oz Crippled Herring. As the sun came up, her quick learning curve on surfcasting became evident (see pic below)… 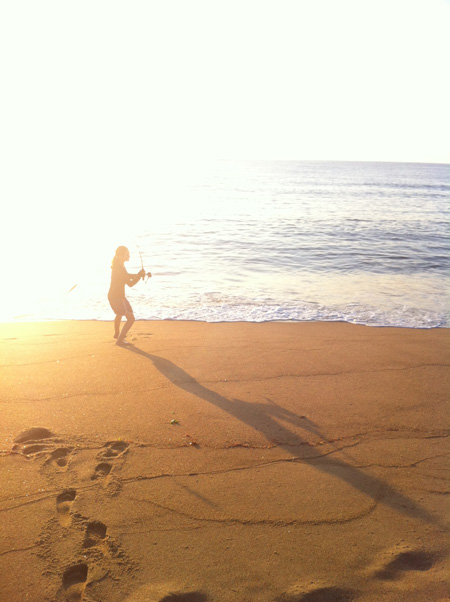 .
And the something cool happened – she hooked up. On the river side of the jetty, on my Green Mac SP Minnow, as we were about to leave.
.
It weighed all of 3lbs and was just short of 21″ long, but it counts… 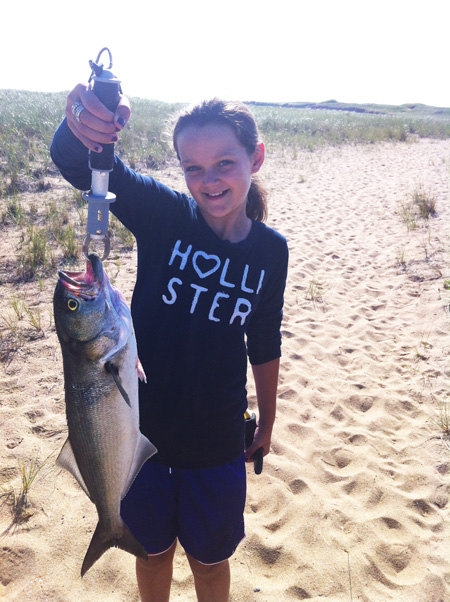 .
She actually asked to stop into the shop to see Mackeral (she is a cat lover), but we had to be home by 9am.
.
This is what it’s all about, right? Weather was great, water was warm and both Emma and I had a great time. We may catch bigger this year, but it won’t match the joy Emma showed this morning with this tiny 3lb Blue.”
.
Tight lines,
Paul
.
Great story. And we love the nail polish too!
We also had some action at the shop:
.
Josh MacKinnon of Plum Island was one of the lucky ones this past weekend. He pulled these two nice fish in from a boat along the oceanfront during the night on august 4. The fished weighed in at 30 and 32 pounds. The bait of choice: EELS. 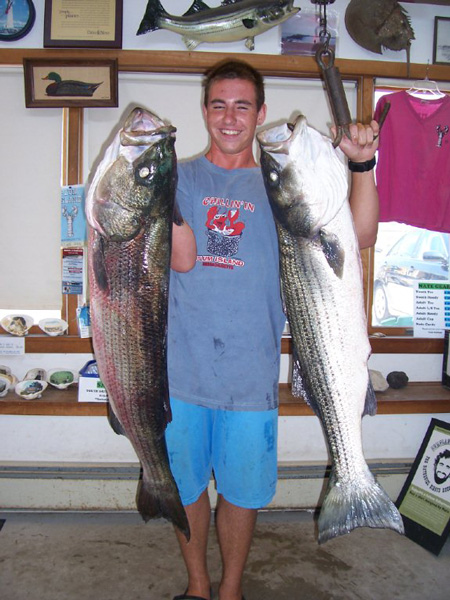 .
.
Sorry to say, but there hasn’t been much to report for this week. The heat really slowed up the fishing. We are still hearing of a few blues here and there, but no anything like last week. The bass seems to be a bit sluggish. They are teasing a lot of the fishermen. They are playing with the bait. Reports from a few fishermen using live eels is that they take the eel but as soon as you try to set the hook they spit it out.
.
We had the Kelly’s and the Paige’s in this weekend. A few small fish, but that was it for them. So, we have reached our summer doldrums. Hopefully it doesn’t last long.
.
But, on a brighter note……..if you are into lobstering……….banner year!
.
And from KC Lee:
As striper season has hit it’s summer lull, I’ve been exploring some of the freshwater options in the area. I’ve mostly been checking out the upper and lower artichoke and have been having a blast.
.
Anyway, I’ve been reading up on a program to reintroduce searun brook trout into the mill/parker river which is (or was) being spearheaded by first light anglers. Do you happen to know anything about this? It seems like an interesting program modeled after a successful attempt on the south shore.
-KC