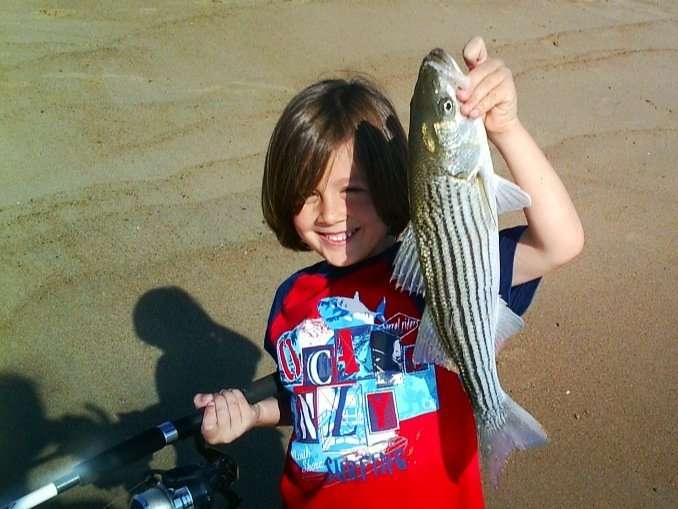 Joppa has seen some increased activity now that the water has cooled some.
We have heard about some snapper blues in and out of the river. We have one
picture to show you from Saturday’s action in Joppa:

Aidan Connolly is up visiting his grandpa from Marshfield, Ma and they went
out Saturday to go tube-n-worming in Joppa. They brought in this 8-4 that
they got a the top of the incoming tide. 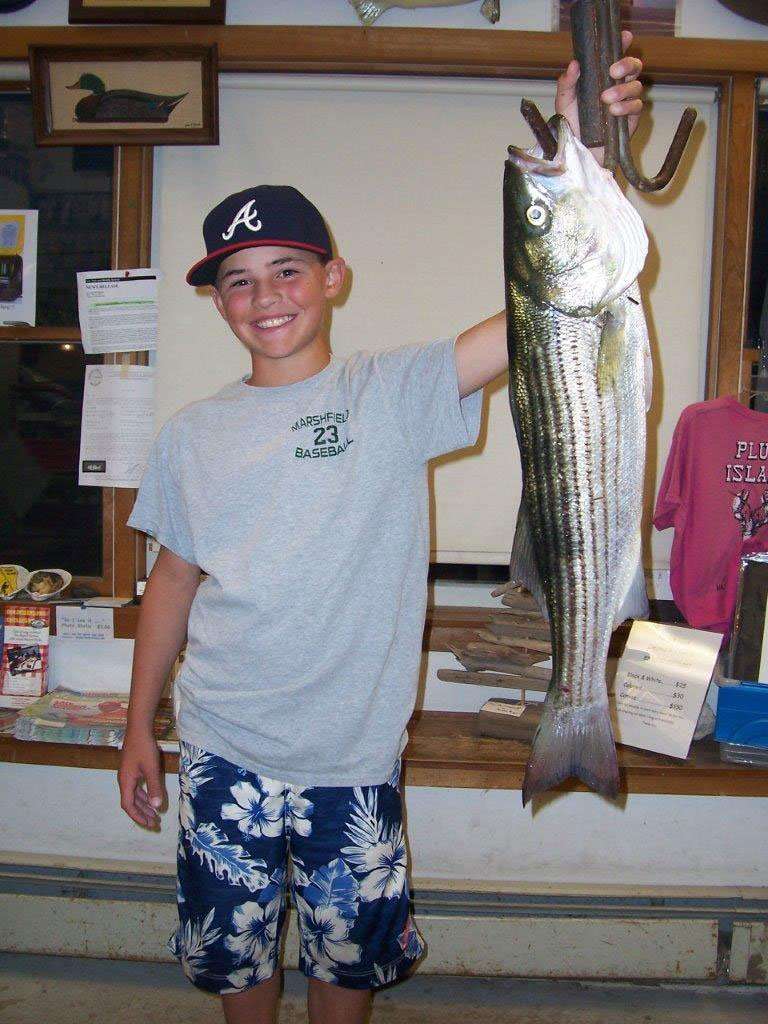 Now we have our own Tommy Kelly. These guys are doing okay for themselves
along the oceanfront. They either hit the beach and walk it casting eels or
they take their kayaks out and cast eels from the kayaks. We finally got a
picture of him with one of his fish. This one was caught from the kayak. Ed
and him went out and between the two of them they got over a dozen fish. Ed
hooked up to one that dragged him for a little ride, but lost it at the side
of the kayak but they guessed it to be about a 20 pounder. It is time to hit
the beach at night for sure. Besides eels, you should also give the lures a
working. Have an assortment of the night time lures like the needlefish, and
the darker swimmers and darters. 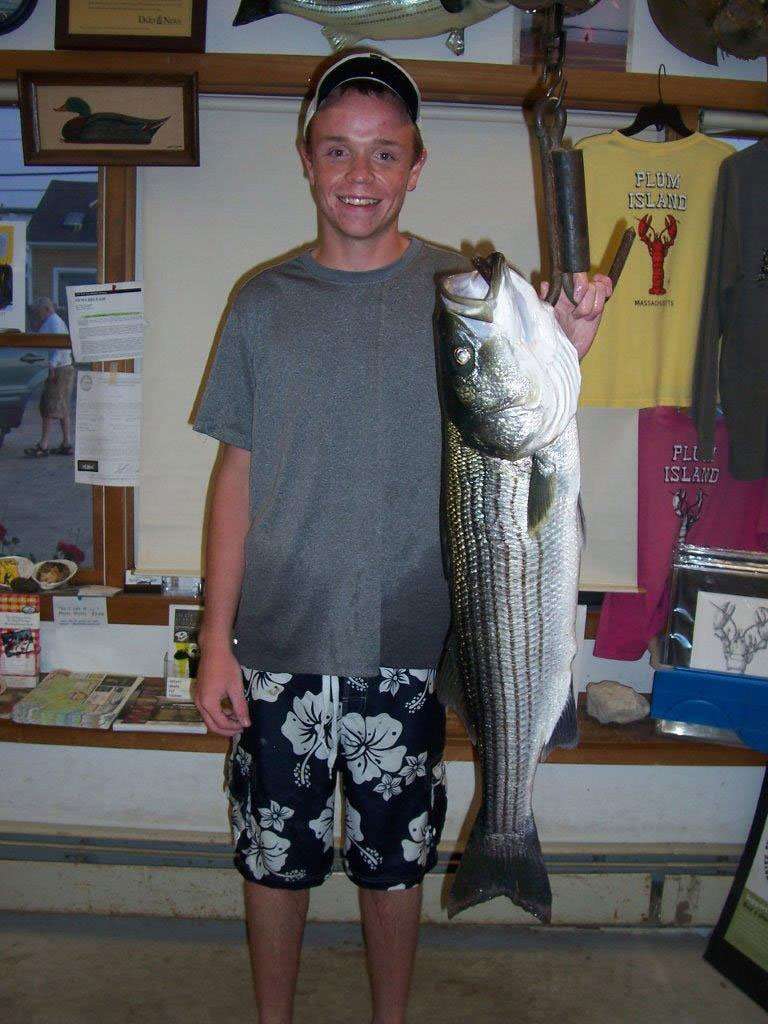 And this afternoon we had Liz Wyka come in with her 9 pound fish she caught
for dinner. She was in this am for some herring before they went out in the
boat. They fished the bottom of the outgoing tide at the mouth of the
Ipswich River. We have heard that there is a lot of fish downthat end.
Crane’s, the mouth of the Ipswich, Outside the Parker. Cant wait until they
open up Emerson at the southern end of the island. Should be a good spot,
hopefully. 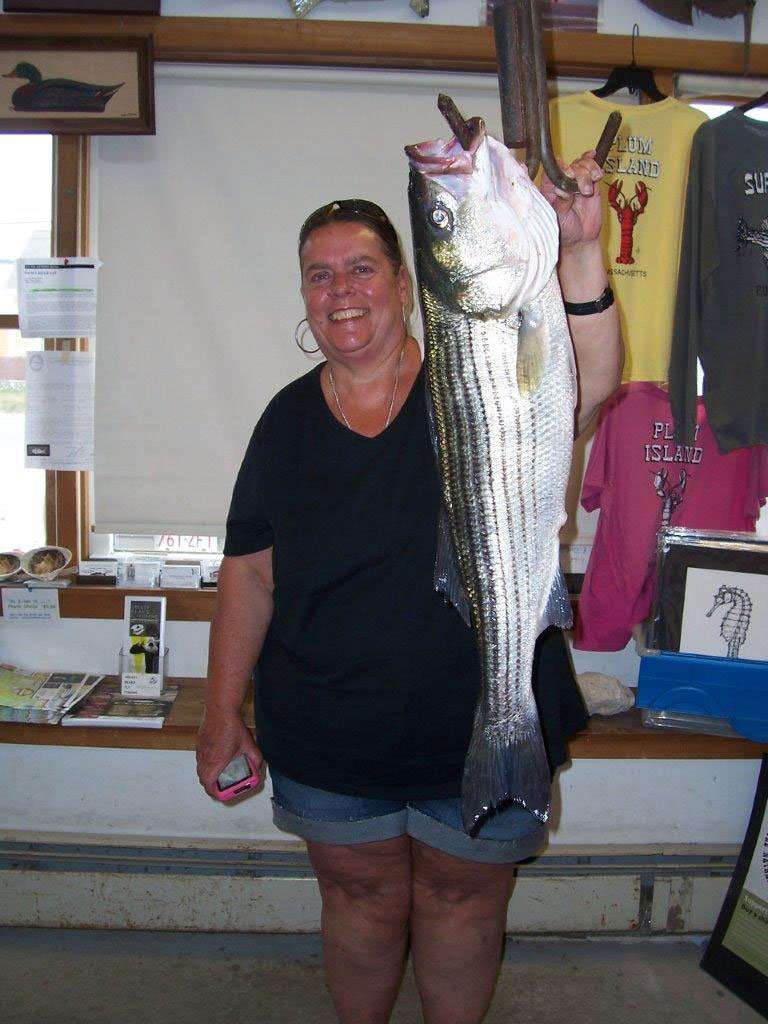 ***By the way, Parking lots 2 and 3 are now open. And remember if you didn’t
get a drive on pass you can still get an overnight parking pass for the
refuge so you can still fish the beach at night, just have to do a bit of
walking.

“Just thought you may like this picture of my 6 year old son with his catch from August 12th. This was the first time his Dad, Chris, took him out early morning. He was excited to land 3 stripers but was very disappointed that none were keepers! He is still trying to “get up on the wall” 🙂 He would rather fish than anything else and you can just see his love for the sport in his smile!
Hope the pic brings a smile to your face!
Have a great day!”
Best,
Meira DiNardi 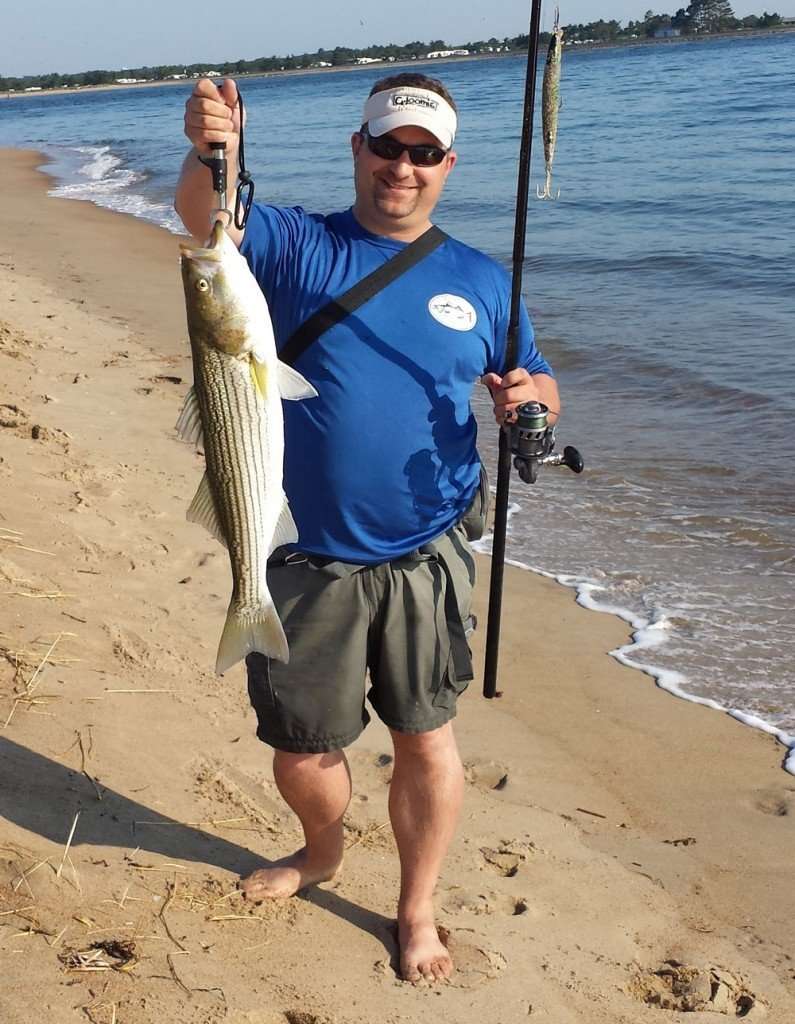 “Hello Martha. Was out fishing sat morning, first at refuge as i never been there.  Very nice but shallow so threw poppers out but nothing. Then hit river front and walked to jetty,  hundred yards before jetty about 8am where the schoolies usually hit and instead got a nice 28″ about 10lbs or more.  Green SP of course!”