Today and last night we got reports of very few fish in the normal places. Tall Jeff said the flats, “sucked.” Martha Moulton and Jimmy reported that there was not much going on, though they did pull in a 36″ bass. Jim Chase was out this morning and fished the river from the 95 bridge to the mouth with nothing to show. Though your author rode two circles measuring 81 miles yesterday and today, there were no tuna to be seen, and today was so flat you could follow boat wakes for miles. It was, however, easy to see the pod of 4 whales on Speckled Apron at sunrise. Love the “whoosh” noise when they come up for breath.

Not all of us were skunked though. We weighed this one in last night about 8:30. Tim fished off the beach at Parking Lot #1 in the refuge around high tide.  He caught using clams for bait! Tim is from Warner, NH.  Very nice fish. About 44″. 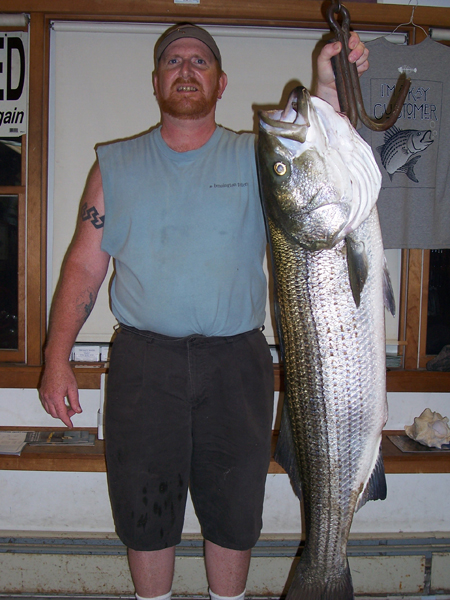 Earlier this week I asked for Catch and Release photos, and I got these nice ones from Mike Christopher. This was picked up using a live mac earlier this spring. 43″. 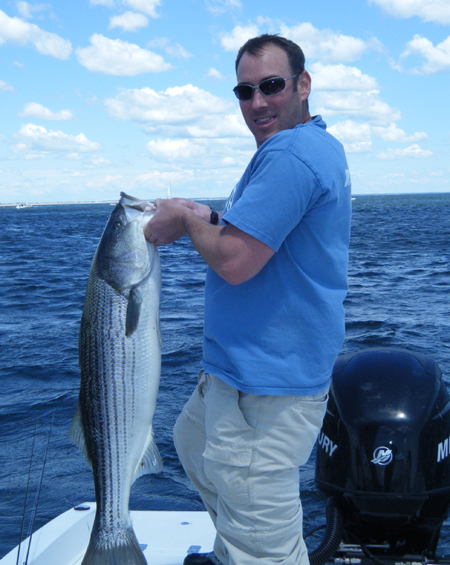 Did anyone wake up to the eerie fog like we had here on plum island Monday? What a scene for a “fright” movie. Anyways, we had a fisherman in that had fished the morning top of the tide and he reported that 3 waves of fish it. The sun was trying to break through the fog at the same time the fish started hitting. Seems the fish were pushing tinker mackerel around. A few were snagged. Most everyone that caught some fish were using metal, skimming it across the water. My reporter said that he saw 4 “keeper” size with the rest 24 inches and over.

Yesterday I had had one of the regulars call in from parking lot #1 from the refuge. He managed to hook into a 24 inch and a “chubby” 37 incher. Both on bait. Again, top of the incoming tide to the start of the outgoing is always a good bet for the oceanfront

Finally the Drive-on permit story for the Parker River reservation has been quantified. The beach took a pounding this winter and spring, leaving very little room to drive. Accordingly, the powers-that-be have restricted the 4-wheel Drive access. Here’s what the new rules are. Kind of a bummer.

The major points to know are that only 50 permits will be issued, first-come, first-served. And you’ll only have access from the #1 entrance south to mile marker 2. Everything south of there will be closed to vehicles. Permitting begins August 23 at the Parker River Reservation gatehouse. 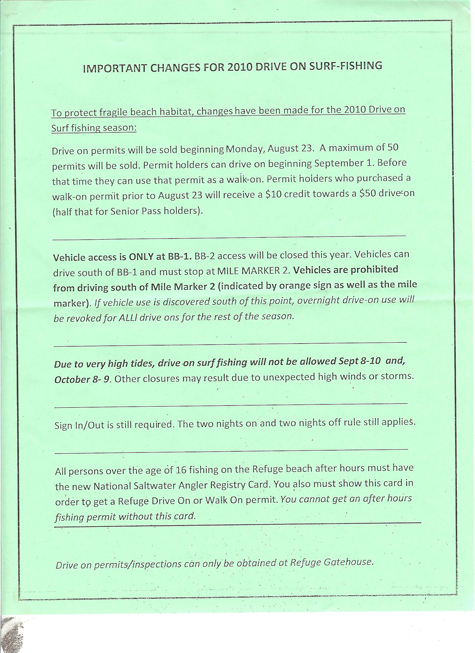