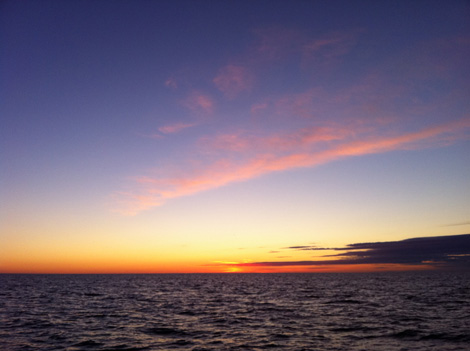 So yesterday we couldn’t find anything but the sunrise. Today, a different story.

I have the luxury of a boat in the Merrimack. Eleven years ago I bought, for $1000,  an 18′ rusted aluminum skiff affectionately named “The Tetnaus” for it’s proclivity towards tearing gashes in my flesh via half-rotted rivets that held the 1978 vintage Starcraft together. I loved that boat. Took me everywhere along the river and all around the front and back side of Plum Island. I never strayed very far from shore in that craft, and there were times I was out in the mouth in conditions far-rougher than a mariner should visit.

After replacing one dead motor with another, equally cranky engine, and nursing way too many non-starting days, I finally stepped up to a newer, more seaworthy craft. Nice 20′ fiberglass center console with a quiet, fuel-efficient 4-stroke motor, a nice chartplotter, marine radio and livewell. With this boat I can take to the clear blue seas and travel 90 miles between fuel stops. I go out in 300 feet of water, see whales, chase tuna, and occasionally jig up a cod.

Guess what. All the best fishing I’ve done this year has been in 4 feet of water less than 20 yards from shore.

Today was one of those days where I loved my boat, but would have been just as happy with my waders on standing knee-deep in the surf and casting seaward.

Beautiful morning for a boat ride. Started out traveling 3 miles or so due East from the river mouth to a lump in the ocean floor called “Speckled Apron.” On other trips there this year I’ve seen pods of 20-30 dolphins, big topwater schools of mackerel, seals, and even a few small whales. No tuna, of course, cause that is what I was looking for. And no life this morning at all. My fishing pal Dave and I had planned to visit an even bigger and further East underwater knoll called “Halfway Hump.” Ten minutes into that journey it became apparent that it would be way bumpy and not to comfortable a ride out and back. The flat air had jumped up into a 10mph steady breeze that was coughing up some pesky 2 foot chop. We resigned ourselves to the idea of trolling for bluefish back off Plum Island.

I’m not that into trolling. Yes it’s a nice way to relax and burn a little fuel as you get a suntan and sometimes a number of fish. But that’s not really my bag. But you do need a boat to do it, and seeing we were standing in one, it seemed like the thing to do. There is an accepted way to troll for bluefish this time of year off Plum Island. Most folks fish off “High Sandy,” which is the first really big sand dune traveling south along the Parker River Reservation. It’s easy to find. Look for other boats. Then you find 30-50 feet of water, throw out a swimming lure, pretty much any kind of big-lipped swimmer that travels between 3 and 30 feet below the surface, and set your speed at about 3.5 mph while running a parallel course to the beach. Then wait. And sometimes you wait for hours. That’s the time, when I’m a guest on a boat, that I usually curl up on the bow and go to sleep.

So, considering I am the captain of my own boat, I chose to put off the trolling for a while and take a ride southwest to the mouth of the Parker River. Lo and behold, just before high tide about 7am, there were scads of terns working the sandbars at the river entrance. Birds everywhere actually, and some splashes underneath them that were not Cormorants. We caught a few small bluefish and a bass using small topwater plugs with black steel leaders. That’s a little surprising, cause I’ve found that bass tend to shy away from the leaders. Bluefish pay no heed, and the wire usually withstands their razor teeth. When the tide got full, the bite went empty.

Once again, I resigned myself to a trolling trip in the usual place. One of the guys who I never see cast a plug is a guy we call “Speedy.” I don’t know his real name, only recognize his dark green Eastern lobster-boat-style ride. Speedy trolls. And he trolls fast, hence his name. I bet he goes 5-6 miles per hour at all times. Unless he is stopped. That’s when he reels up a chopper. Speedy is the best bluefisherman I’ve ever seen.

My co-pilot Dave believes Speedy is his nemesis. Dave loves to troll, and loves to pull in bluefish. The problem is, whenever we’re out on Dave’s boat, even side-by-side to Speedy, we can’t dream up a bluefish. Speedy blows by us a hundred yards. Stops. Reels in a bluefish. Repeats it all morning. We get a nice suntan. I’ve never met Speedy, but when I watch him with my binoculars (and that’s pretty often cause he always has a fish and I don’t) I see he trolls with an umbrella rig. That’s a kind of coat-hanger thing with 5 or 6 hooks. Speedy has one that has silver spinners on all the spars. That seems to be the thing that is luring all those bluefish to his green boat. 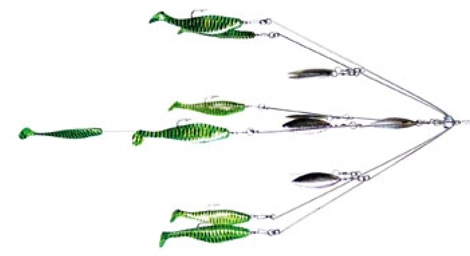 Today Speedy is my best friend. Against all odds, on our way back to High Sandy, we saw Speedy way south of his usual haunts fishing in about 50 feet of water. As usual, he was doing his cruise-stop-reel-unhook-cruise pattern so we went to see if we could troll up a blue here too. All the luck or, more likely – skill – was Speedy’s. We got nothing. However, when I’m antsy and trolling slow, I tend to get out my trusty binoculars and peek around at what’s happening. That’s why Speedy is my best friend, he slowed us down long enough to see a pile of excited birds about a mile to our side, pretty much right on the beach.

And that’s when I would have traded my boat for some waders and a surf rod. I love beach blitzes, and we trundled right along into one, in about 4 feet of water, perfect for fishing from the sand. Yes, I’m whining. The boat worked great too.

The flock of birds hovering over the water was about 200 yards long. When we first got there you couldn’t see any fish breaking the surface, but two casts with a topwater plug, in this case a mackerel pattern Super Spook and a lime-green Robert’s Bounder, brought in two fat and angry bluefish.

The birds kindly stayed on the school of fish, so when we released our snappers, we went right back over  and casted again. Same deal, more angry, yellow-eyed monsters. Bluefish get pretty excited when they’re boated, and tend to throw up the semi-digested contents of their stomachs. One bluefish did just that and actually puked up this baitfish directly into Dave’s face. Here, evidently, is what they were eating:

This blitz continued for 90 minutes, starting about 8am, the top of the tide, until 9:30 when it got quiet. In the middle of the blitz we started blind casting about 50 yards behind the school of popping fish just cause there seemed to be some that were not on the surface. Good choice. The bigger fish were lumbering along behind the active school. Each of our casts were being pummeled by alternating attacks of striped bass and big bluefish. Dave grabbed a fat 40″ linesider while I was continuing to get mauled by bluefish. All this time you could have beaned us with a cast from shore with a 6 foot Zebco and a metal lure. 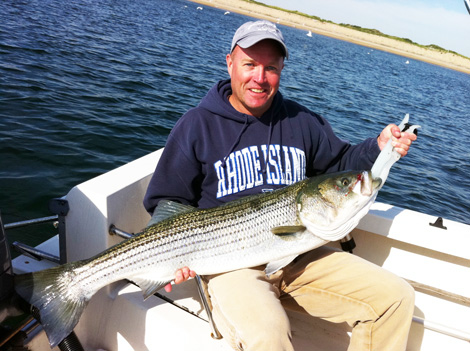 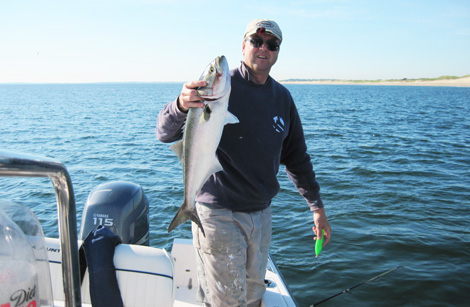 One of the coolest moments for me was when I changed plugs to use something bigger. We call it a “Chair-leg” due to it’s size, but it’s better known as a Gibbs Pencil Popper.

This 8″ long, big wooden plug seemed to tease the larger bass into fighting with each other for a bite. While fighting a decent 36″ striper, she took a pass by the boat. Swooping alongside like the team of Blue Angel Navy Jets, were six cookie-cutter bass all waiting for the first one to cough out my lure. That was the best moment I had all morning.

Of course I probably wouldn’t have seen that from the shore.