Ok, one day the bluefish are crazy off the beach, chasing bait onto shore. The next day they’re out in 30 feet of water, 300 yards from the sand. Next they’re upriver, then downriver in the mouth. Funny thing about bluefish, they school and blitz and scream here an there. Kind of like a 6 year old eating too much chocolate, pumping up the bloodstream sugar levels and running rampant.

Well, this morning the bluefish were hiding somewhere I couldn’t find them. Now that word of the schools has reached nearly every fisherman in the Merrimack Valley, even a Tuesday morning at 7:30 can find a pile of boats in a long conga line slowly trolling up and down the shore. This morning the armada did now seem to be hooking up often, just here and there. The action might pickup with the tide change, and the wind lightening up this afternoon. At any rate, no fish found my trolled mackerel pattern X-rap tasty enough for a bite.

Significantly better luck was afforded Mark Nelson over the weekend. He writes, “Hey Stickman, This past weekend New England Kayak Fishing held it’s 7th Mass Bay Striper Shootout. Over 150 kayak anglers from all over the country and some from Canada participated. Most anglers fished around Cape Anne, Lots of bass were caught. I got lucky and  won the Open Division with this nice 46” bass. I caught it early Sunday morning before light on a live eel. Second place was a nice 45” and third was a 44”.” Nice work Mark! 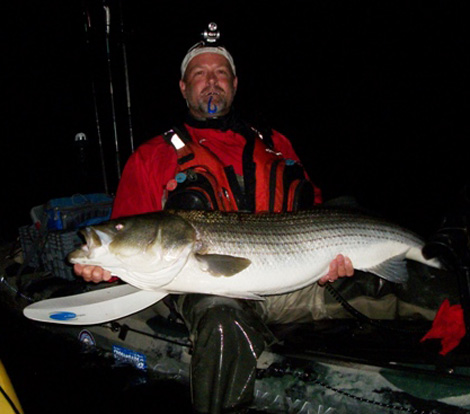