The wind, that is. It’s howling out today around 20-30mph due east. The beach will take a beating, especially considering the full moon tide is tomorrow, and the stormy weather will last through Thursday. Better double the weight on your clam/worm rigs to cast into the stiff wind.

Today was the Parker River National Wildlife Refuge drive-on permit opening. Sadly, there were only 50 permits available on a first-come first-serve. Last year there were nearly 150 according to our local experts. Then again, last year there was a lot more beach (7 miles!) open to driving, and the beach was pretty wide. This year the beach was narrowed considerably due to a large number of severe storms. At places on the beach now there might be only a single-truck’s width sand between the water and the dune. So our length is now only 1.3 miles. Hence the smaller number of permits.

Well the permitting started at 7am, but fishermen had been there in line all night, starting before 9pm! Yours truly, after fishing until 2:30 in the morning, finally made my way to the line at 7:05. I was 47th in line. Anyone who came after 8:15 was out of luck for a permit this year. 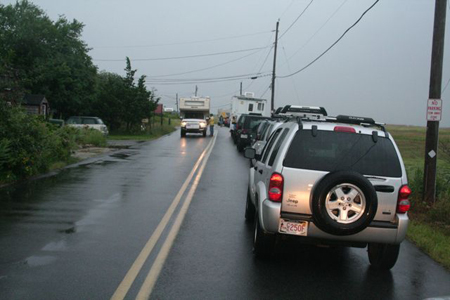 Well the fishing kind of blows today too. The big numbers of bass taken throughout the last month or so have dwindled. The rivers have not produced fish in the regular spots, and even the tube and worm guys have had no luck, and they are usually the bellwether of fish on the flats.

Friday and Saturday nights were great times to be on the water though. Flat calm with a nice clear moonlit sky. We did have reports of a few fish for the eeling crowd. With better reports coming from the beachfront than up in the rivers. We haven’t got a lot of reports from daytime fishermen but the rumble is that there is not a lot going on, not even bluefish blitzes, which are kind of expected this time of year. Hopefully this trashy weather will kick in some higher-quality fishing.

We’ve been getting some catch and release photos to add to our weigh-in portraits. If you’d like to send us some, email them to stickman@surflandbt.com. Here are a few reports from our readers:

This fish was caught off Plum Island right in the middle of the lobster pot field on 8/8/10. The wind was howling and I told my wife to put the boat in neutral but when she did we started to blown right into the pots so I had to bring in it with the boat in gear. Caught on a tube & worm rig. One of the party boats happened to be going by when we hooked up and immediately turned around and dropped anchor. Probably thinking we were into blues, better luck next time. I could hear a few groans when the fish when back over the rail. Appx 18 to 20lb’s
Dan Cartier – Amesbury MA
. 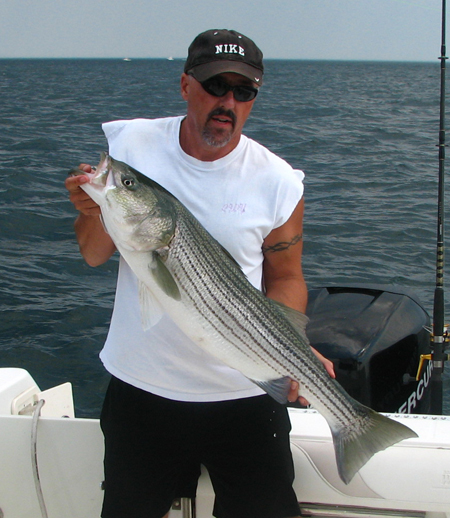 .
.
This was my daughters first bass of the year….caught and released just a bit north of the north jetty….she saw your request for catch and release photos…she landed this fish on her own and did it on 15# test.Scott Wiinikka 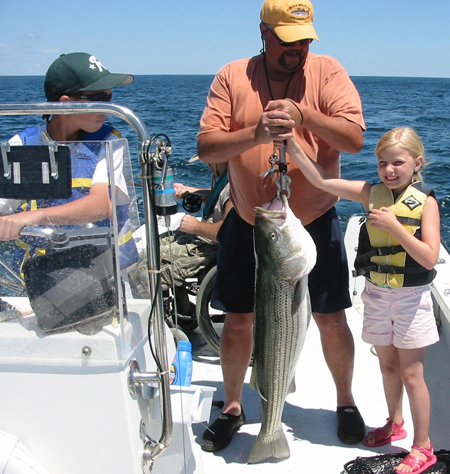 .
From Jim Osborn, this is from last friday night: 40 inches and fat – drifting an eel in the Mack river- the only fish we got for the whole tide.
. 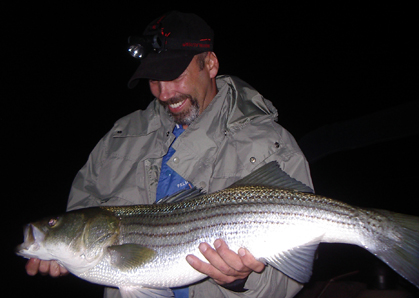