The Page Boys said they were the only ones fishing the beach last night for as far as they could see. No otehr little lighted rod tips anywhere. People….you gotta put the time in if you want the fish. They took worms and hit the oceanfront just before darkness fell. They caught five keepers during the night. They ranged from 30-34″. Two fish just after dark, another at dead low, and 2 more during the incoming tide. They were still there when i walked the beach this morning. HARD CORE!

Grandpa was in again late this morning……..this guy has a lot of grandchildren! Today he had grandsons Nolan and Gavin Holloway from Pembroke, MA out on the boat. These guys got up with the sun to go fishing with grandpa. Again, tube-n-worm around Woodbridge at the top of the tide to the start of the outgoing. Here are the boys with their 11 pounder! They headed in shortly afterwards because the water was leaving the basin fast and when you moar in the basin you have to make it in before it is too late. Dragging a boat through the mud isnt exactly fun! 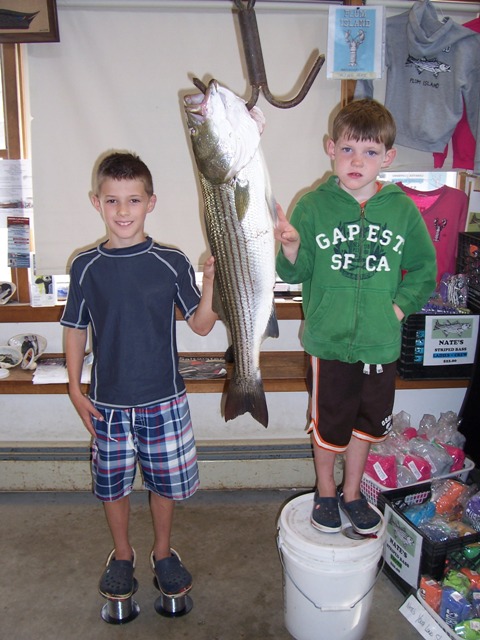