Well, these fish that you will see here are not like the monster we put up the other day but they are still worth talking about. This past week has definitely seen an increase in action along the oceanfront for the bass. Early morning has been producing some small stuff with low tide having been early in the am this past week. A lot of the guys have been using worms and clams for bait and metal has been the lure of choice for the fishermen. The other tide that has been also productive has been the top of the incoming tides. Have seen  fish from parking lots 1, 2, & 3 on the refuge and also a few fish from Sandy Point. Those have been by bait fishermen using clams and worms. Here are some pictures of out bait fishermen: 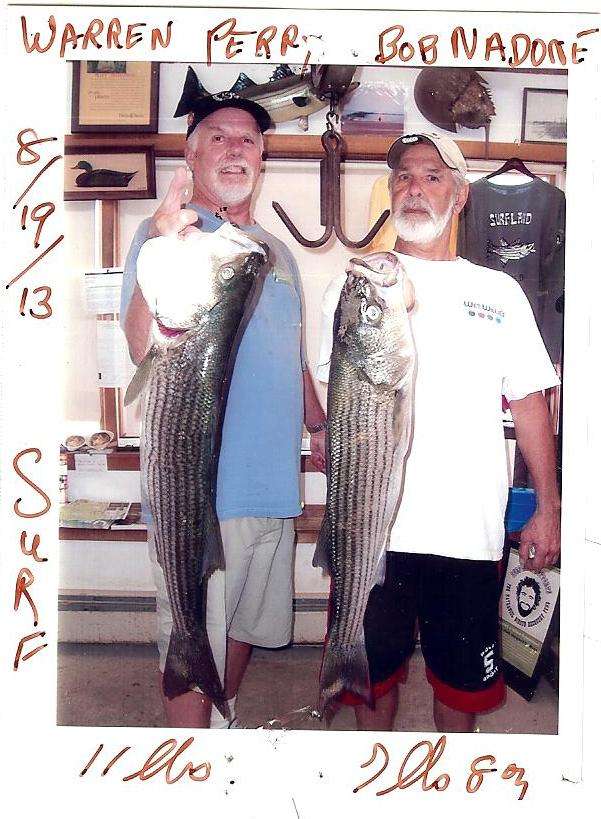 8/23 – Steve Leblanc from Groveland used worms and clams on the PRWR. His fish weighed in at 11-8 pounds. 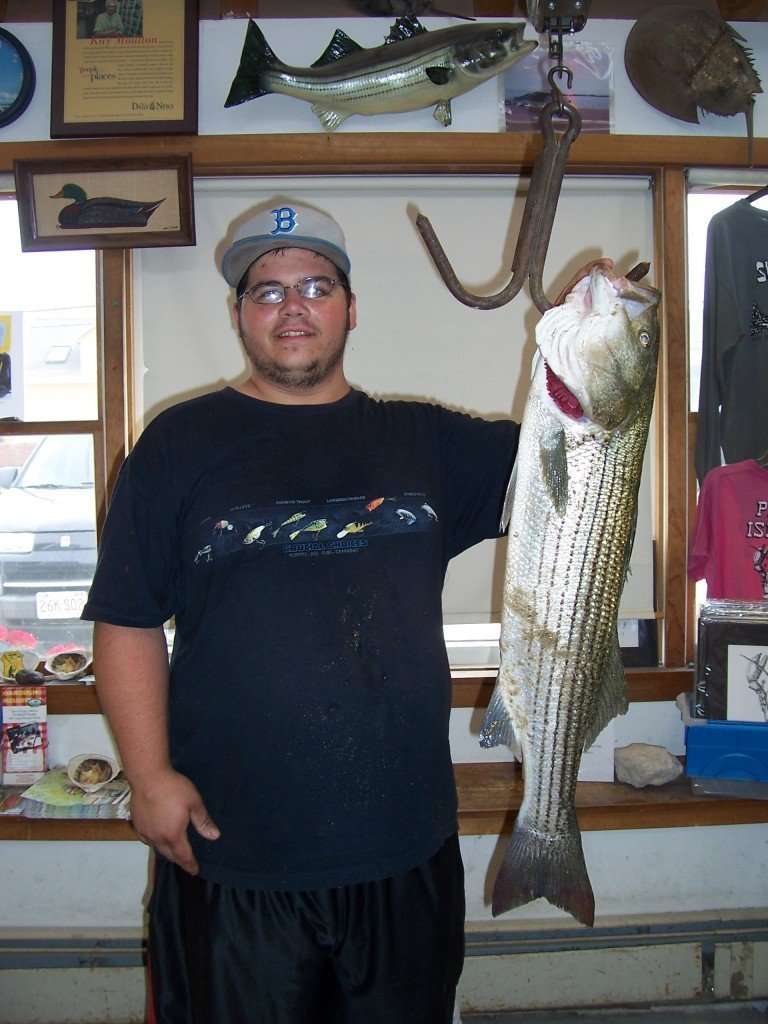 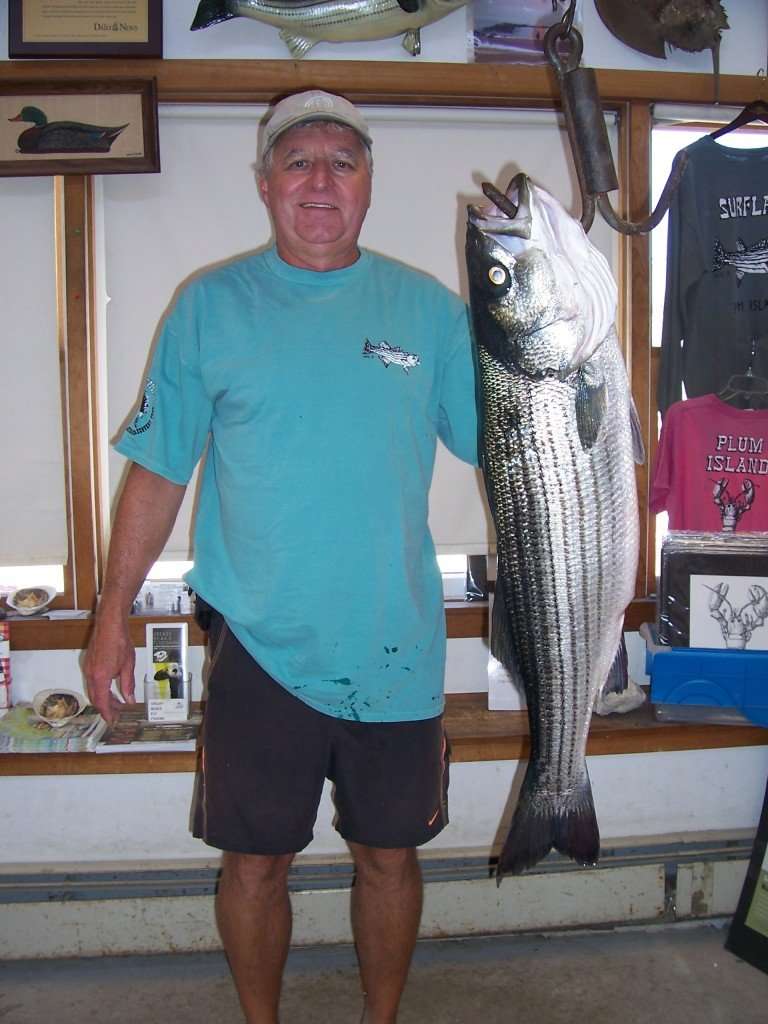 8/24 –  Bill Leger from Hubbardston, MA caught his fish at the top of the incoming tide at Sandy Point using clams. His weighed in at 10 pounds. 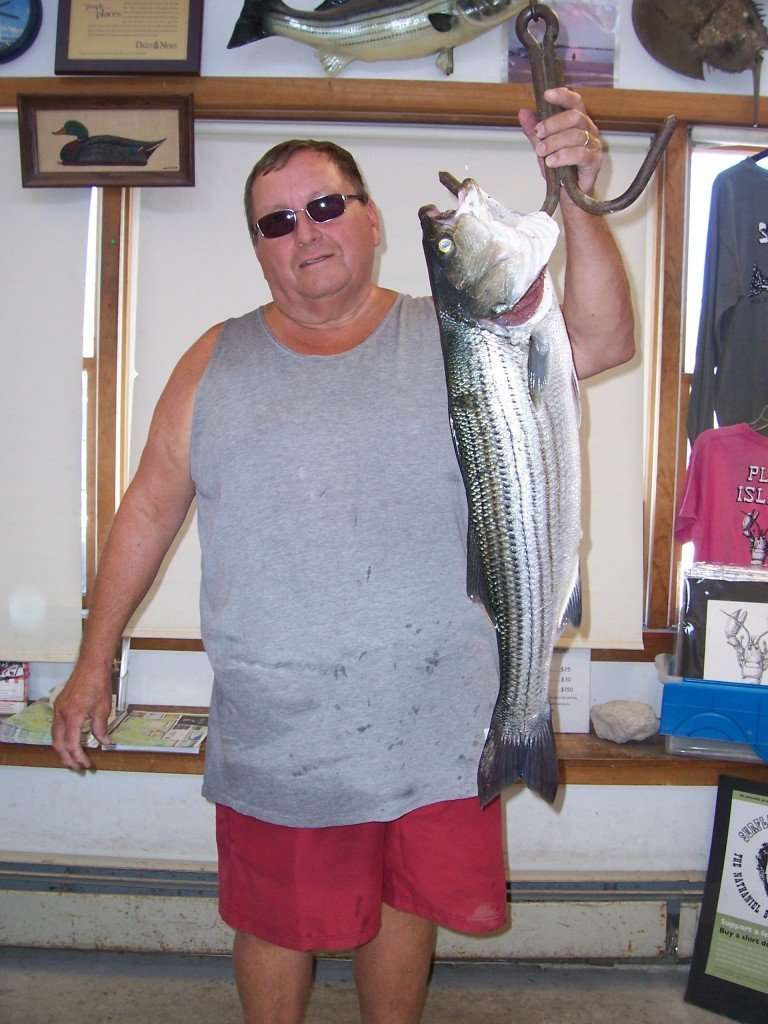 8/25 – And just now while I was doing this report we had Nick Mosher from Salem, MA come in from the PRWR to weigh in his 8-13 pounder that he caught on worms. 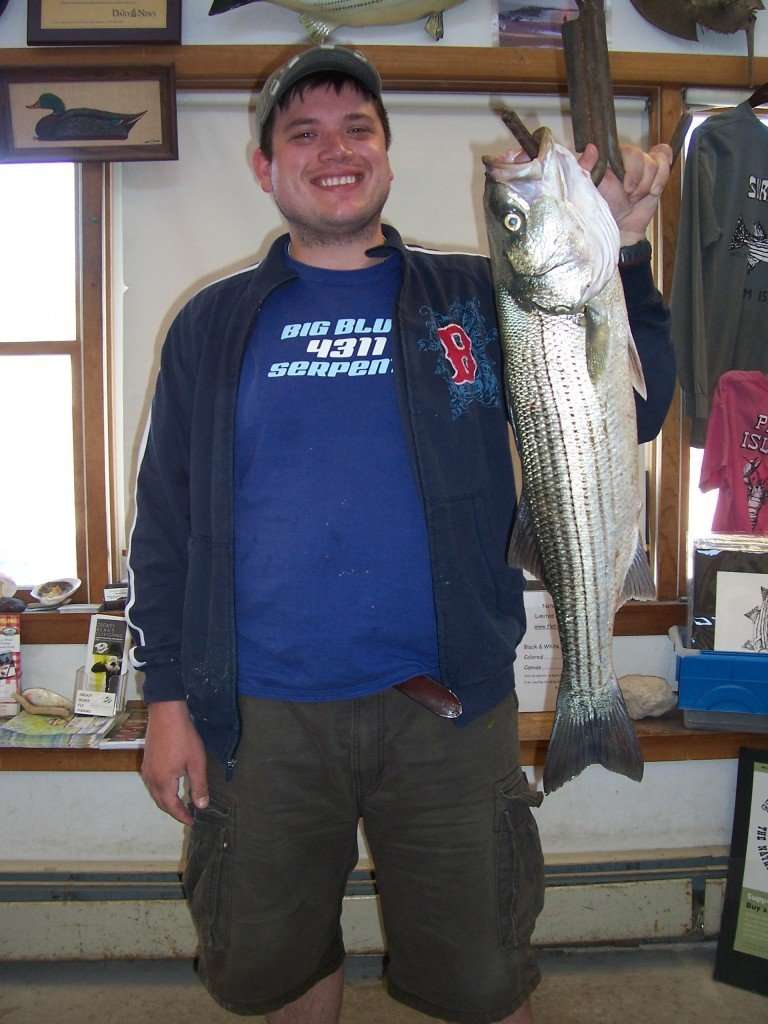 Noah Leger from Gardner Ma came in with his catch. A 8-8 pounder that he caught along the oceanfront on clams. Another fish about 26″ was also caught and released. 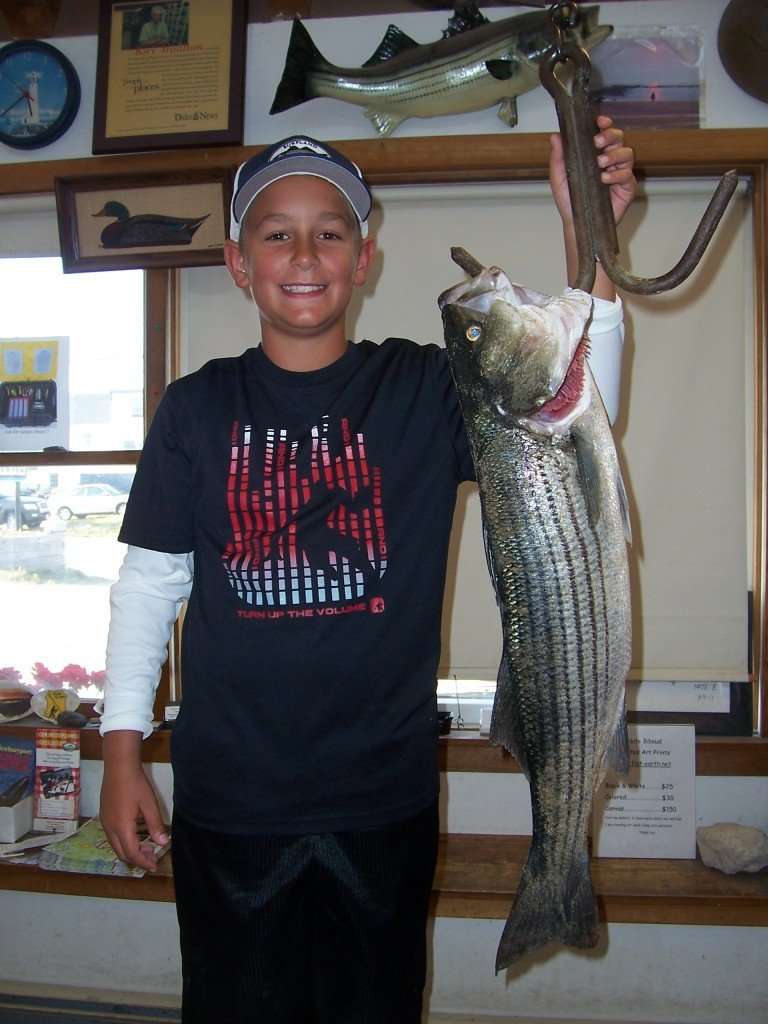 Now, one of resident lure guys, John Liss traveled over the border into Seabrook on the evening of 8/23 and did well on fish and decided to keep this 9-10 pounder that he caught using a Charlie Graves lure(metal) since his wife told them they were out of fish cakes!!! YUM! 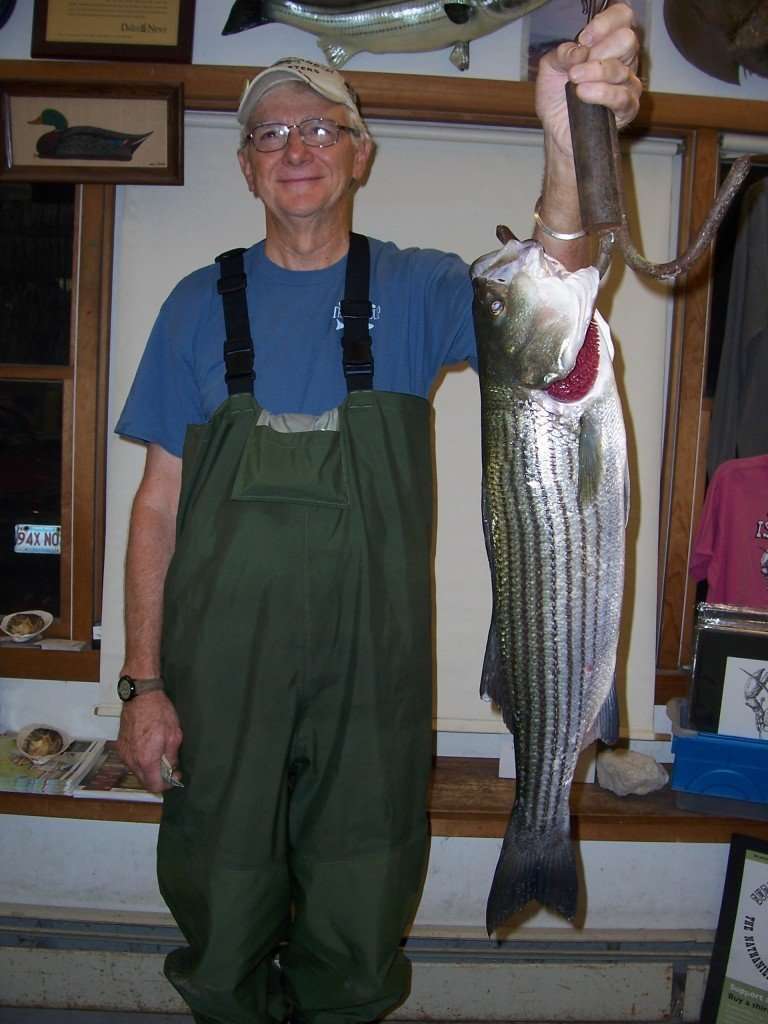 And out last picture today is of our very own Tommy Kelly, resident eel expert. He got to go out in the boat this past Friday night with Zach from Riverfront Marina. The hit the front beaches and trolled eels. They had a blast that night. Went through many eels and here is a picture to share from their many catch and releases. They make a good team……….the next Dave & Jimmy???? 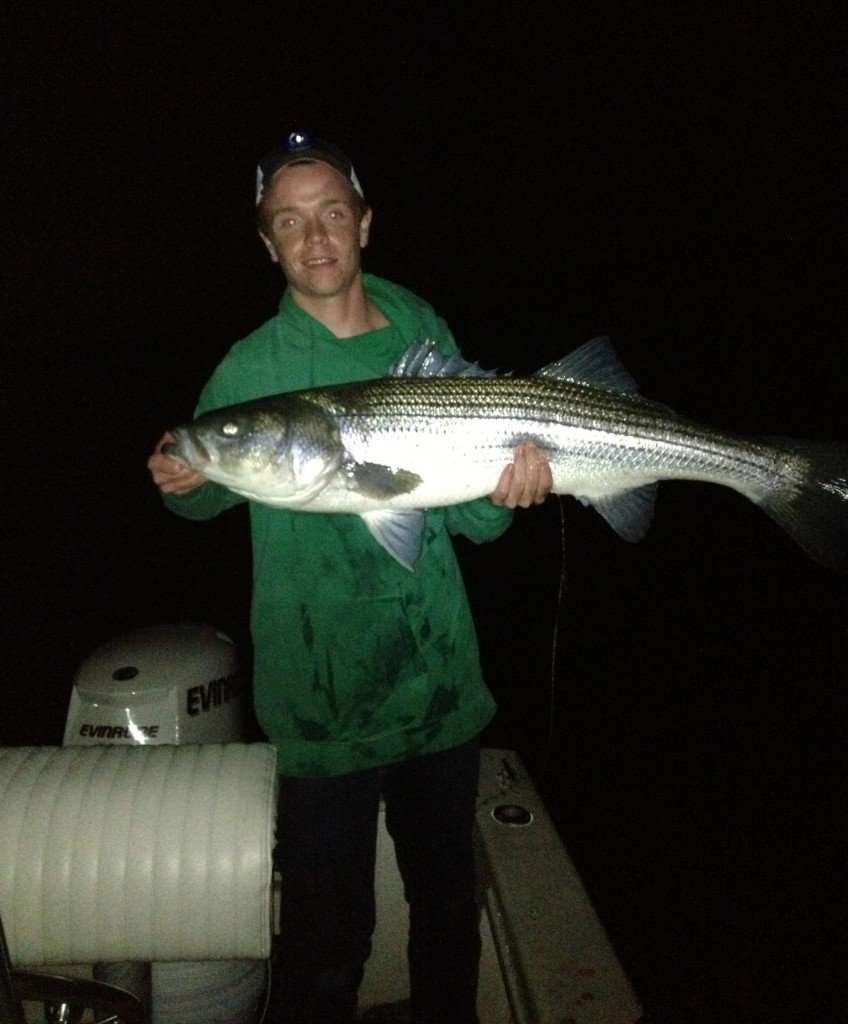