The weather has turned very nice, and the river, at least, is calmer. Off shore the waves from our NE wind were kicking up to 3 feet with whitecaps, so no especially flat water to watch tuna or whales. And no bluefish in their regular haunts off High Sandy either..

However there is some excellent news from the Parker River Refuge. Lot’s 2 and 3 are now open. That means the fishermen now have access to the beach for the first time this year. We hope this will allow you folks to get to the water’s edge and huck some bait. Before the blow earlier this week, some nice bass were being taken on the beachfront at Lot 1, so 2 and 3 should produce as well. Clams seemed to be the primary winner for bait, though Big Kenny insists it’s a worm beach. Your choice, or try out both.

Trolling eels at night in the river has not been that productive. Your authorspent 5 hours last night creeping along at 1.5 mph with only 1 fish to show for the effort. The Flats seemed devoid of life. Only one brief bluefish hit to speak of. Here is the net catch of the night: 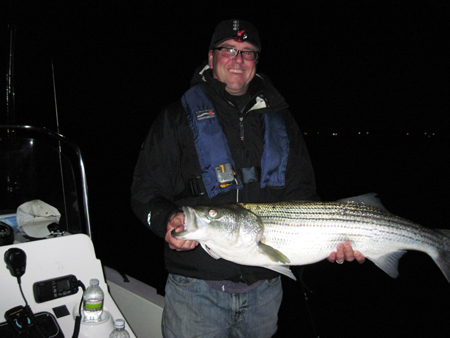 We also recieved a catch and releas photo from Tom McNall from earlier this season. He writes, “Another catch and release.  Ken McNall’s huge 27” striper at the mouth of Essex River. Trolling tube and worm.” 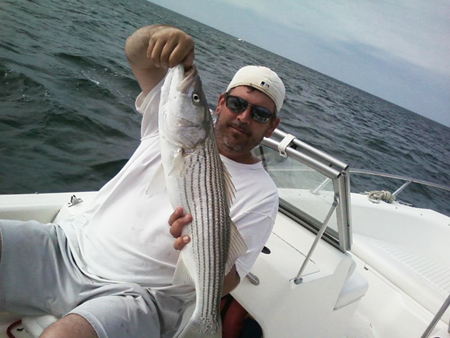 So that’s today’s report. Looks to be a fantastic warm weekend. Come down to the shop for some bait and the latest news.