Can’t say much about the last few days until this morning. Mark Silveria was in and he fished from 11pm until just after daybreak this morning. He was just in to report that “the full moon has brought a new scholl of fish in”. He trolled live eels along the oceanfront during the outgoing tide and caught a lot of fish ranging from 24″-40″. His biggest fsih were 3 that ranged in his best guess from 28-32 POUNDS!. Just before daybreak he hurried into the mouth of the to catch the bottom of the tide and ran into schoolies up to 29″ fish inside of the river at the end of the sandbar. He said there were also some fish on the Sailsbury side too. Just received another phone call from another boat fisherman to report that they fish last night the incoming tide and also did well. They are headed in with a fish. And then there is Zack. A young fishermen learning his way has had a hard time this year, until last night. He called Kay this am also and said he had a blast. So, maybe Mark is right…….the full moon.
~~~~~~~~~~~~~~
I am sorry that I don’t have much to report from the surf guys. We have had a very quiet week here as far as night fishermen. They are waiting for the fall run to start. I can tell you that Larry from Newburyport was down yesterday and he caught small bluefish along the oceanfront, walking and casting lures. Not tons, but the few he got were in the 4-6 pound range.
~~~~~~~~~~~~~~~

Here he is, the one and only Al Cormier with his 36-4 he caught from a boat using eels. Are you going to gove up the kayak? 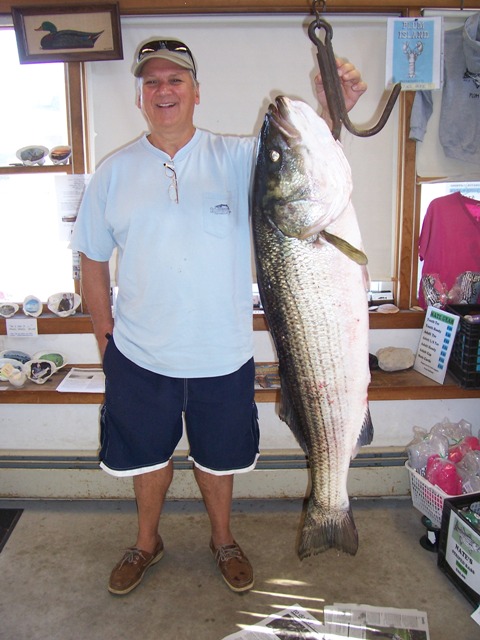