We have had a bit of action this week, some very, very early in the morning.  At the beginning of the week some of the guys started at 3 am along the oceanfront. They have been fishing the bottom of the outgoing tide.  Jimmy from Lowell has done well on black Hogy’s . Others have tried top water lures with for daybreak and have gotten some decent results. Be patient, there is masses of bait fish out there and the fish are being fussy, so have a decent selection on hand!

The river has also started producing some fish. We have guys fishing up near the party boats with worms and clams that are picking up  a few fish. While at the other end of the island (Sandy Point) some guys are having very good luck. (maybe like mike says below, the water temps are a bit cooler down there). Clams have been the most productive down there if you like bait. If you like to throw lures try the SP Minnow or some of the metal stuff.

AND, last BUTT not least we have this “ray of sunshine” who didn’t want to show his face for the grief he gets from friends.   “Magic Mike” was in the shop yesterday and decided to rush out to fish the “bottom” half out the outgoing tide. I’d like to tell you that Mikey was “bottom” fishing at the “crack of dawn”, but I would be lying. Instead he headed south to fish the Ipswich area trolling his worm……I mean a worm  on a tube rig and was rewarded with some nice fish for his efforts.  These two weighed in at 24-4 and 17-12 pounds. He also said that the water temps at the southern end of the island were a bit cooler than the Merrimac. We think he should of tried some bASS ASSassins! Anyways, Mikey was sure gassed after landing these fish. 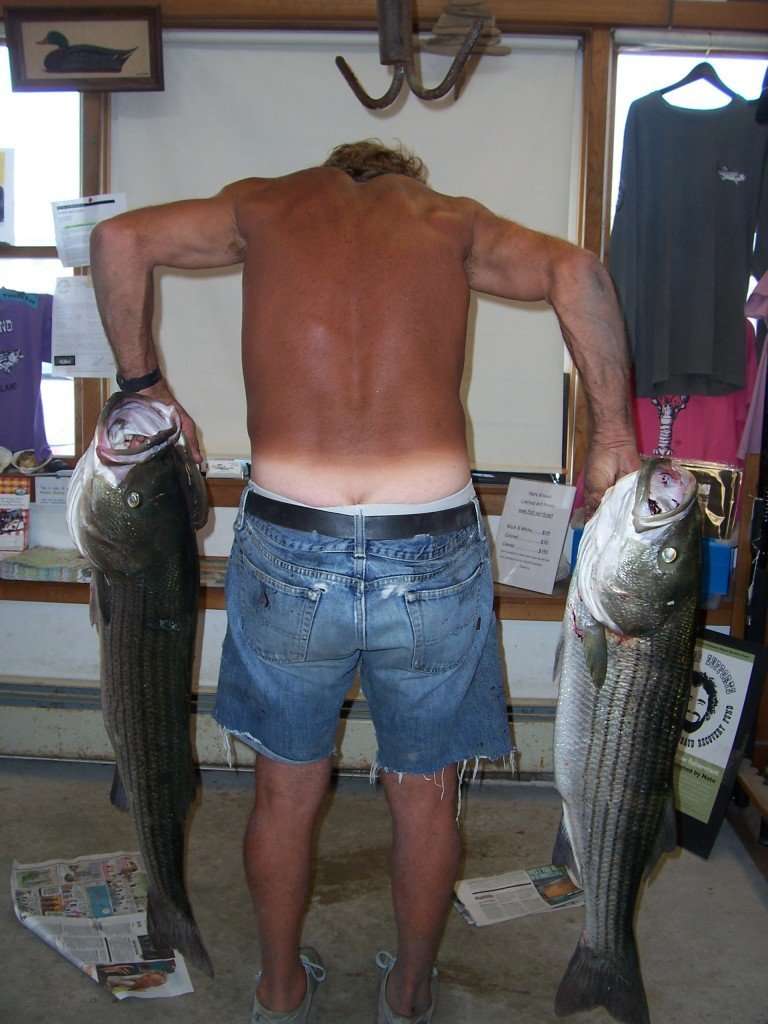