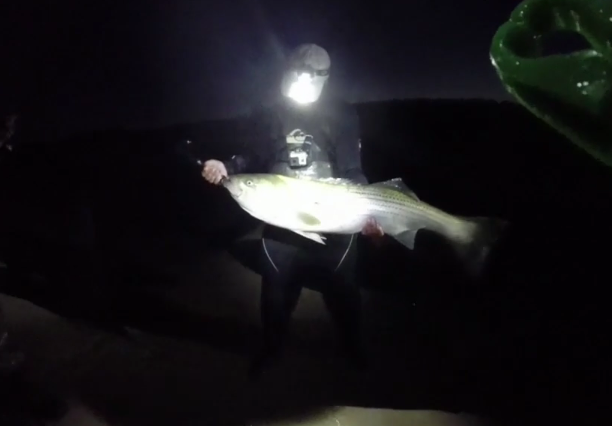 I landed a truly huge bass on Friday night, a new personal best for sure. The fish was probably well over 45 inches, Ed paced it off and it was roughly about 4 feet long (Ed’s got a big foot) and well over 30 pounds. The fish was caught on a dead eel. I had just cast and started my retrieve when I had stopped and was messing with my hat and headlamp. I had actually stuck the rod between my legs and had both hands off of it when the fish picked up the eel and started to swim off with it. The line came tight all on it’s own so I leaned back and set the hook into what turned out to be an absolute slob. The fish was released healthy and strong and is out there for another lucky angler to catch. I hope you will consider doing the same next time you land a beauty of a fish. All fish featured in this video were released. Thanks to Gabe Chuckran, Tom Kelly and Ed Kelly for the help and the extra footage!

Oh and this fish was caught right here on Plum Island, out on the Parker River Wildlife Refuge to be a little more specific (but that’s as specific as I will get). I’ve also caught a couple other nice fish as well down there, as have the Kelly clan ranging from 10-20lbs, all on eels and at night. So there you have it, there are some quality fish around if you know where to look and put your time in.