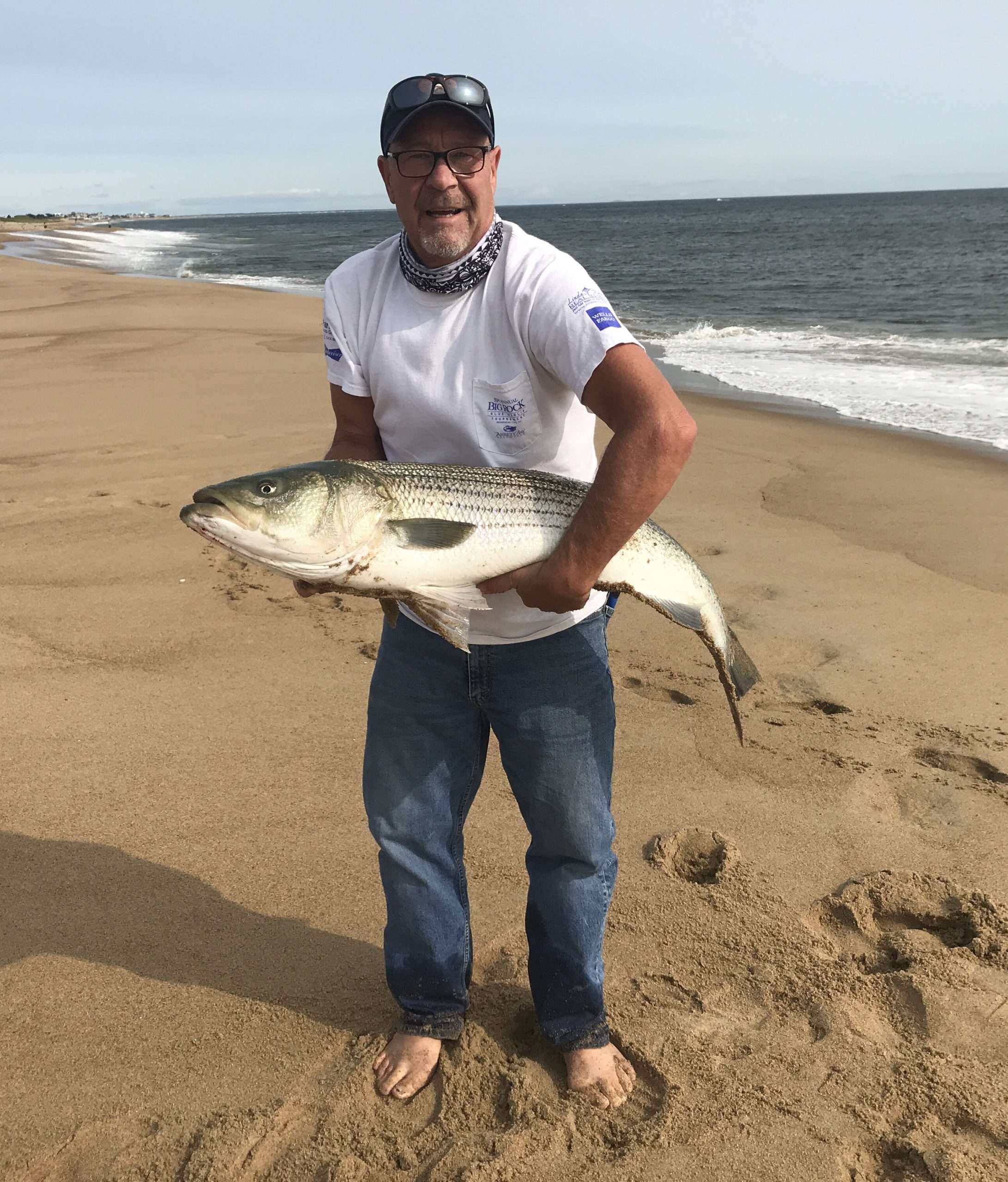 The report today was going to be about how we have so many schoolies being caught during the day. Was ready to push the “publish” button on the report until we got busy in the shop and I had to abandon it for a few. Well, good thing, because now we have something to report from the beach besides schoolies. Art Campbell, a Plum Island resident who has his drive-on permit was in this morning, bought some clams, and headed out onto the sands. He stopped by the shop just now(11:30am) to show us a picture of the fish he caught. This 45″ striper was caught using clams during the top of the incoming tide. He and his fishing buddy also caught 4 other schoolies in the 20″-25″ range before it was time to leave, Art also reported that others along the stretch of drive-on beach were catching fish also. It looks like a busy productive beach day! Plus with the new moon happening later this week it is historically a good time to fish!

Remember running down the beach to catch bluefish as they blitzed up and down the beach? Some of you may not, especially all the new people we have this year that have joined our fishing community. But those “good old days” were a lot of fun, That’s what September meant to a lot of fishermen. Have many fond memories of watching the “Red Rocket” run full tilt down the beach chasing the bluefish. Ahhhh…those were the days!

Haven’t seen action like that for awhile now, but we are hearing of a few blues. The oceanfront along the Parker River Wildlife Refuge is one of the “places to be” this time of year. The whole beach is open to walk on at any accessible point there is, night fishing permits are available so you can fish on the refuge (but remember you have to be on before the gate closes which is somewhere around 7:00pm), and then there are the beach buggies that have gotten the drive-on-fishing permits and have the upper section of the refuge to move about and fish. So with so many opportunities we are bound to hear of a few blues. And that was the case these past few days. Some smaller blues have been caught by a few of the guys along the beach on the PRWR. There has been more bluefish action from a boat along the oceanfront, but not far from shore so you never know! Another popular spot is down by the mouth of the river close to or on the jetties. Today, that was the area that Tony Cela was fishing when he hooked into a 27″blue. Tony’s favorite tide to fish is the top of the outgoing here and it usually produces something for him (like we state always, never leave at the top of the tide!!!) Today it was a 27″ and a 20″ bluefish along with 7 schoolies in the 20″ range. All fish were caught using chunk mackerel. Here’s hoping that the September Blues continue to show up in bigger numbers!

Over Labor Day weekend a group of friends decided to have a night out of fishing. Tommy Kelly, who works for us here at Surfland and at Riverfront Marina on the Parker River took a group of his friends out for what they were hoping would be a night of catching big bass. Well, they were not disappointed. They fished the oceanfront during the incoming tide with eels. Tommy was able to make sure his friends Matt, Trevor, and Colgan all caught some nice fish that night ranging from schoolies up to fish measuring 45″. Lots of fish in the 15lb. range were caught that night. What a great way to spend some time with friends!

So, as always, the night bite seems to be better for producing bigger fish whereas the daytime we tend to hear about more schoolies than anything else (UNTIL TODAY!!!!) And that is what we have mostly heard about this past few weeks (AGAIN, UNTIL TODAY!!!) Lots of small fish again are here in sizes ranging from mid teens to mid twenties. Some days being better than others, like Adam Ledger has found out. First day of drive on for him produced about 40 schoolies…….next day only a couple. But hey, they would call it catching, not fishing if it was that easy! And as always, top of the incoming tide along the oceanfront is a popular time to fish, but never leave until the after the tide turns and you catch the start of the outgoing. A lot of times it is the changing of the water movement that can produce fish! The same can be said for the low tide. Low tide is very popular in the mouths of the rivers here, the Merrimac River at the north end of the island and the Parker River at the southern end of the island (which is where Sandy Point State Reservation is situated). Low tide has produced small fish this past week at both spots on different days. But again, never leave until you have caught the started of the incoming tide and the water has shifted.

So we have been hearing reports over the last few weeks of Fluke back in the area. But not until this weekend did we have any kind of proof. Fluke (a.k.a. Summer Flounder) have been caught inside both the Merrimac and Parker River. Two different groups out of the Parker River have caught some. Ed and Andy Kelly and also Zach Pinciaro and his friend Dom. Ed and Andy recommend fishing either side of the high or low tide especially during the slack tide before the current gets crazy. Their bait of choice from the boat is mackerel. Take a mackerel and fillet it so you have strips and they will flutter in the current. Ed recommends if you are going to try to catch some from the shore to try casting a fillet and slowly drag it across from the bottom jigging it now and then. a good place to try this method would be the southern end of the island around the Sandy Point and Emerson Rocks area. In the Merrimac, we might suggest over on the Salisbury reservation near Badgers Rocks ( area near the campground inside the river). Each of the two parties listed above caught one keepah each, but also lots of shorts. The regulations for fluke are: minimum size is 17″, 5 fish possession limit, with the season open from May 23- Oct 9.

What a year for bait. We have struggled this year at times to keep some baits in stock. At the beginning of the season it was a struggle to find the mackerel. Then getting clams were an issue off and on with us having to get some from other places and not knowing the quality was tough for us. And worms, let’s discuss worms….. this past weekend were the worst digging tides of the whole summer, and there have been bad tides already! We are expecting a few later today, and hopefully build up the supply for the weekend. But if you plan on coming down we suggest calling and reserving some. We will do our best to fill every order we get. And we thank you for your support and understanding.

As most know, the moon controls the tides. Here is some info in this link for those interested.