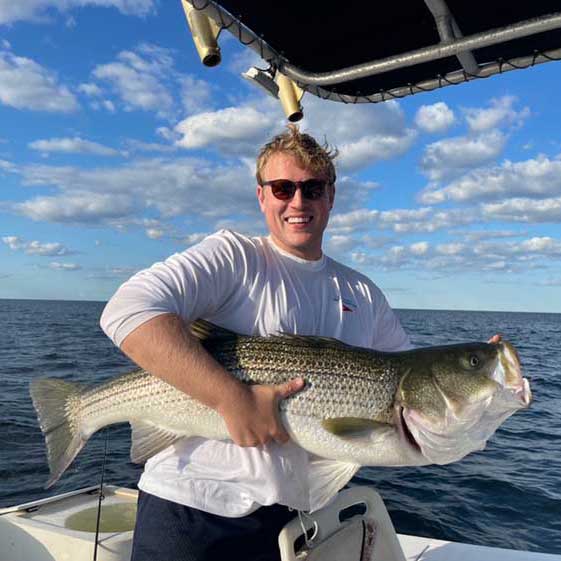 Boat Action:
The action this past week continues to be mostly from the fishermen in boats. (The river was still a bit “nasty”) The southern end of the island can be a productive time of the year right now if there are any blues in the area. Start trolling along the ocean once you hang a right outside the mouth and the houses end and point the boat towards Sandy Point. 30-40 feet is usually the sweet spot to troll (but not always! Keep your eye out for top water action too!) Have a lot of fishermen using the trusty “tube-n-worm” out there or bring out the old staple deep diver swimming lures for some action. There has been a mixture of bass and blues being taken.

Plum Island Beach Action:
Finally had a few fishermen in to report a few blues off the beach, but they said it was a very long cast to get to them. So if you got it in you head to the southern end and practice your distance casting!!!

Reports on stripers has slowly, very slowly been increasing also from the southern end of the island. So things are starting to improve there. It all just takes time. Dave, a longtime customer from the beach buggy crew in vacationing in Hampton. He reported this am that they have been catching some nice bass up there. Have also heard of some fish along the Salisbury Beach. Hey, we love to have you all fish on the island, but maybe a day or two, or a night trip a little north along the beach might produce some fish for you. Worth a try from the reports we are getting.

Joppa:
The past few days we have finally heard about some fish returning to the Joppa area. We know some people were still catching a few even with all the “junk” in the water, but not until yesterday did we hear of any in numbers. Hopefully this trend continues and we are now back on track to get some big fish back. Can’t tell you how many offshore guys were in and the stories they told about the massive schools of stripers they were seeing while tuna fishing or bottom fishing. “Acres of them” were the most used words. Pretty simple, they follow the food! All that freshwater would push the bait out and they simply follow.

Other than that we have a few guys out trying to catch flounder, and some even trying for the occasional fluke. But that is the boat guys. From the beach we haven’t heard of much in the way of flounder. Sorry. 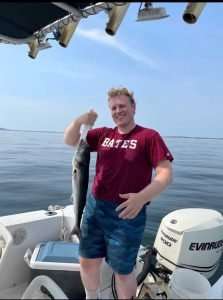 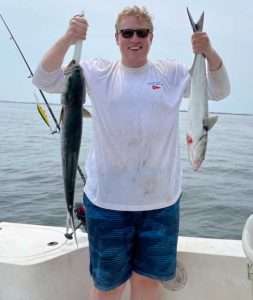 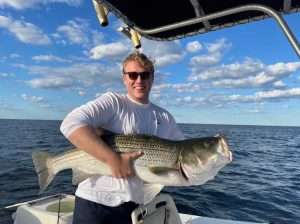 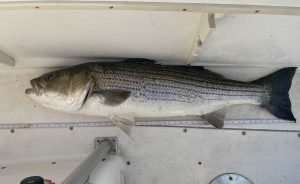 James finally got into some blues this past week along the oceanfront. James has managed to do alright for himself as have a few others. 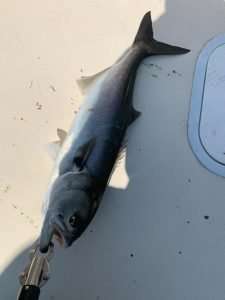 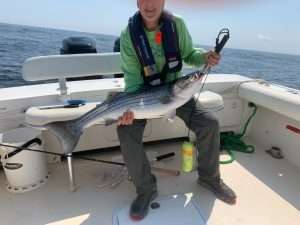 Mike P. has also been with bass and blues along the oceanfront as well. These fish were all taken on top water, a 23 pound striper and 7 blues. Not bad for a day on the water. 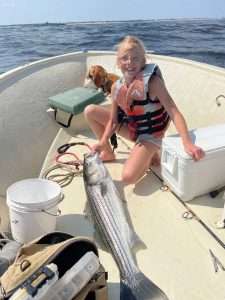 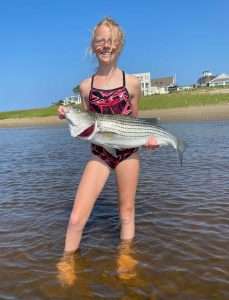 Speaking of having a good day……what better way to spend a day than with your grandpa on the open seas. Here is Addison F. (daughter of past employee Kerri Gallagher) out for the day with her grandfather Mark. Being the only girl in a group of boys, this is always a special treat! Here is Addison with her “keepha.” 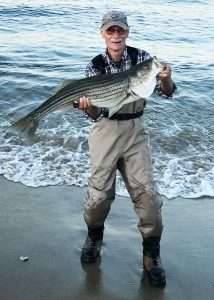 Hello Stickman.  The refuge is heating up for the catch. Nice fish around. Here is a 35 1/2 inch caught on chunk.

Nick and Sam of Lowell 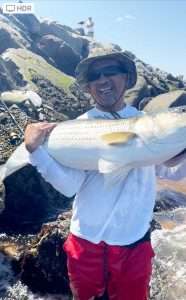 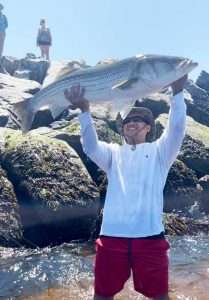 Hi Y’all. My friend and I were fishing on the Plum Island Jetty this weekend, and hooked on to this Mermaid Of Fish. Thought I’d share some pictures to encourage those out there that are thinking there are no more keepers around. Well, here is proof. Oh, and the fish was released safely.

My wife caught this fish on Monday 7/26/2021. We returned to redeem ourselves from our previous fishing trip the night before (Sunday) because of a pulled hook on a possible trophy sized bass. But dedication and perseverance paid off and she was rewarded with a giant trophy sized bass measuring 44in and approximately 30-35lbs. My name is Anthony and my wife’s name is Sopy. 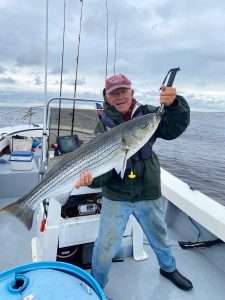 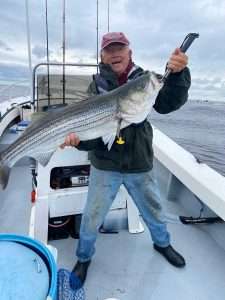 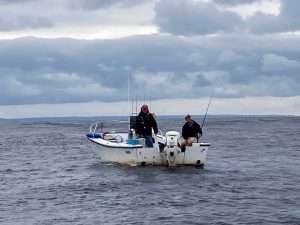 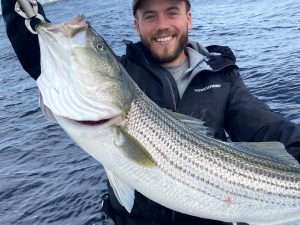 Bossi was in yesterday am. Shared pictures from July 28th. Out fishing the mouth of the river with his grandson Trevor Bossi. They were live lining Pogies. 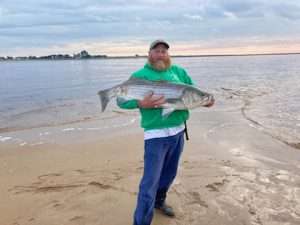 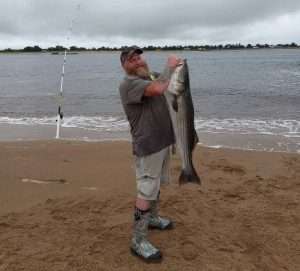 In the past 2.5 weeks I have landed these 2 beautiful fish one was 45 inches And the second was 46″ both were safely released. 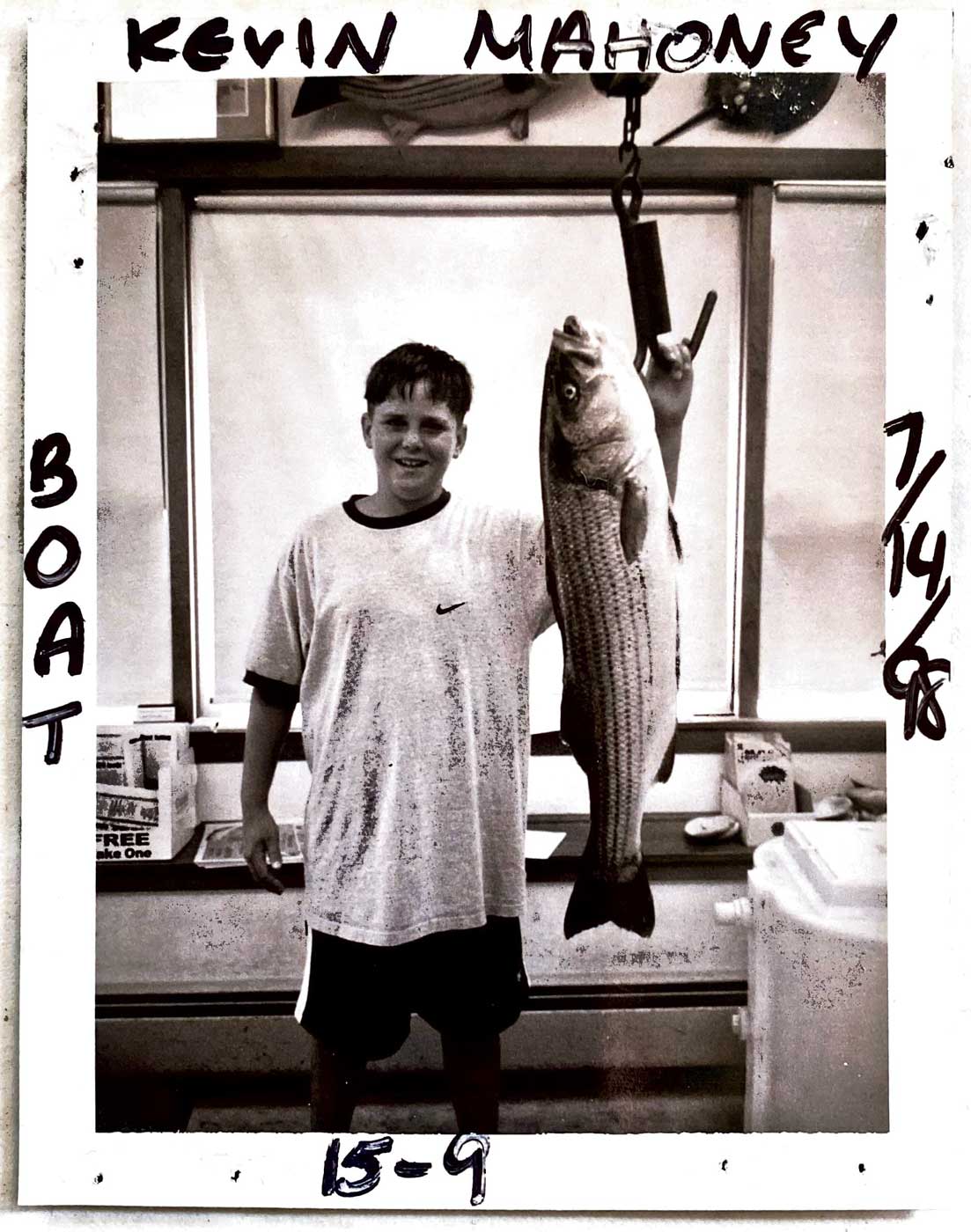 By now most people have heard the sad news about Kevin Mahoney. He was an island boy and a fisherman at heart. We remember him from a young age coming into the shop with his fish that he caught to get weighed in and his picture on to the wall.

To the Mahoney family with whom we all grew up with on the island our hearts go out to you. Although it has been a few years since he had weighed in a fish, this is the way we will remember him….the proud little boy who was anxious to come show Kay his catch.

The Moulton Family and The Surfland Crew.