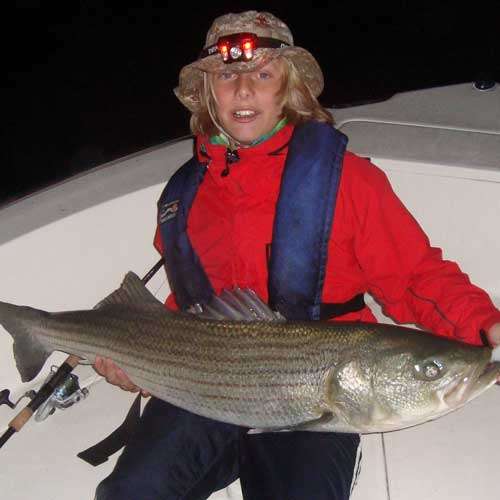 The New Moon full tides were well-timed for night fishing this week. Due to the Great Eel Drought of 2016, I only got the opportunity to fish Thursday and Friday evenings for a few hours either side of midnight. My neighbor Steve had been out in the daytime during the outgoing tide, trolling tube and worm on the ocean front earlier in the week, and reported great rewards. A good number of keeper and schoolie stripers while fishing just off the shore in 8 feet of water. Well in the reach of surfcasters too. Basically right in the curl of the breaking waves on the sand.

So Thursday night, filled with anticipation, I took a corporate client (from my real job) off to drift the beach by boat. Drifting was pretty easy, because the wind was coming straight from the North at the brisk pace of 10mph. Let’s just say it was a little bumpy. Despite our best efforts both casting and trolling live eels, we were completely shut out, with only one hit to show for our time. I was really surprised, because at that same area, just 10 hours earlier, the fish were all over the place.

The results were significantly different the next evening, Friday. I took my far-too-infrequently-seen friend Alfred, and his son Charlie with me to once again try to lure stripers onto my boat. Charlie is 14, and has been a mad fisherman since we met back when he was 8. We’ve been fishing together 3 times in 6 years. Against all odds, each of those trips have been successful in their own way. Back in 2010 Alfred and Charlie asked me to teach them the rugged art of the Tube and Worm process in Joppa Flats. We caught one schoolie. 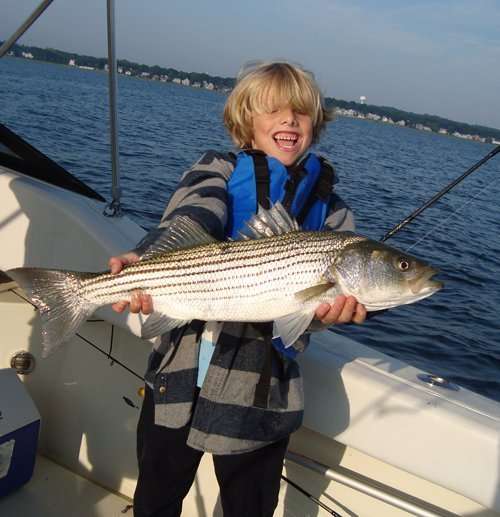 Later that summer I took them to Breaking Rocks to fish for mackerel, which failed. But on the way back to the river we bumped into a blitz jammed with big bluefish that lasted about 90 minutes. At 8 years of age and likely just 60 pounds, I actually had to throw my arm around Charlie to keep him from being pulled off the boat when he connected his popper with a 30 inch blue. Hey, any kid that age that can cast a popper is welcome on board my boat.

Last night, 6 years later, and with the previous night’s skunking, I warned Alfred and Charlie to expect the worst results. I half-thought of calling off the trip cause it’s wicked late, kind of cold, and not likely to produce. To their credit, the father-son team said they were equally interested in seeing how to fish live eels, as to catch any fish. That certainly takes the pressure off me as captain and guide. Before we even went out Charlie thanked me just for having the opportunity to connect with a bass.

All worry for naught. Charlie’s personal goal was to catch a 40″ striper this summer. In the first hour he came close, with this 38″ fish on a casted eel. It was hooked perfectly, right in the corner of the mouth. 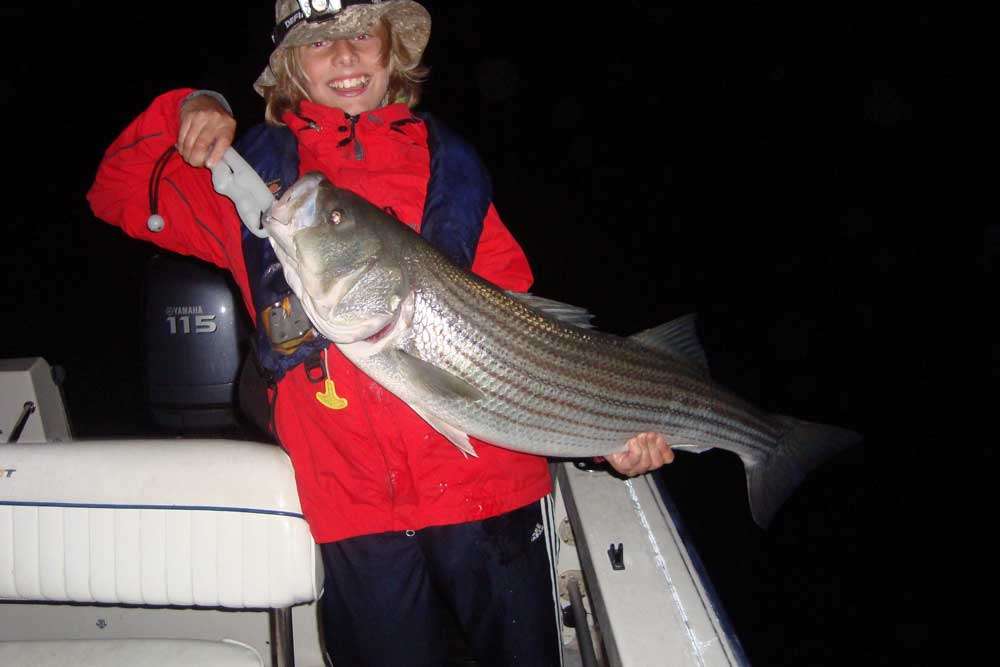 It was kind of quiet for the next hour drifting south on the beach. We were fishing 10 feet of water, which at high tide is only about 30feet from the sand on the shore. We noticed a couple wading surfcasters ahead of us, and didn’t want to upset their fishing, or get beaned with a plug. So we turned around and headed back to the spot of the first fish. Thank you anonymous surfcasters. When we returned, lo and behold, they were still there.

The next fish for Charlie beat his goal by a few inches. He picked up a 43″ striper on a trolled eel. This one was 21 or so inches around, making it about 30 pounds, and 14 years old. Same age as Charlie. 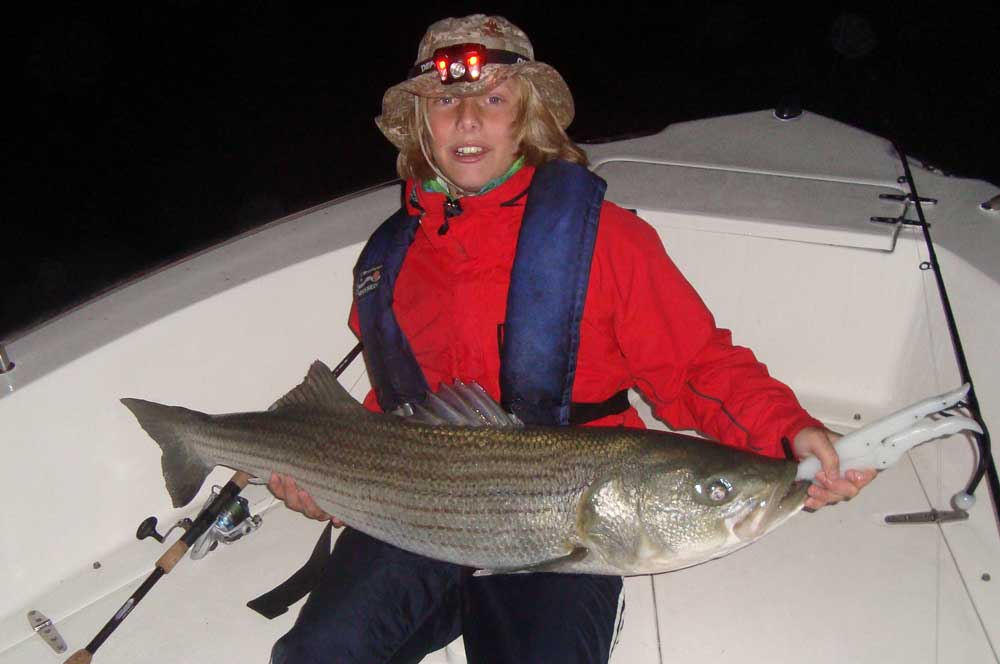 Not to be outdone, Alfred grabbed 4 fish, though not cows like his son’s stripers. But he shares his kid’s wide smile holding one for the camera. All of the night’s fish were released in good condition. Both fishermen were quick on the hook set, and not one of the fish were gut-hooked. 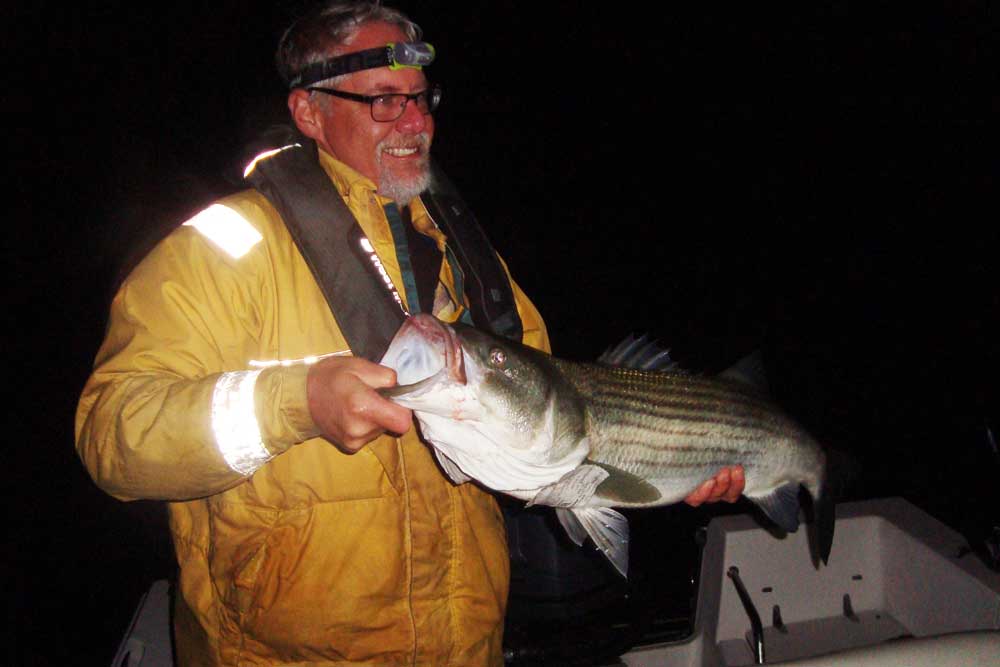 The surf is supposed to get bigger this weekend, and rain is forecast for Monday, so get yourselves up here and try your luck.