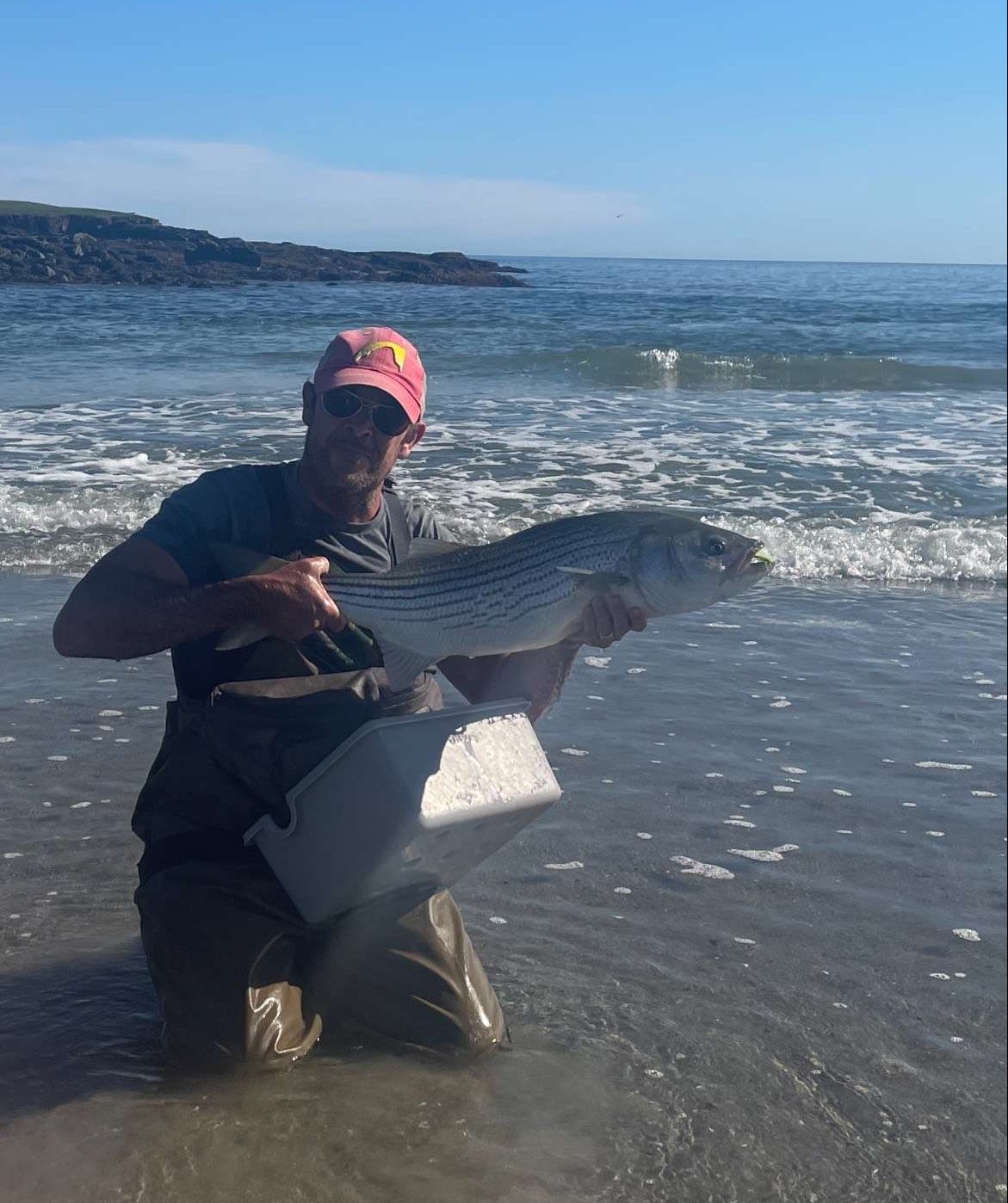 Posted at 09:00h in Uncategorized by Liz Cowie 0 Comments
0 Likes 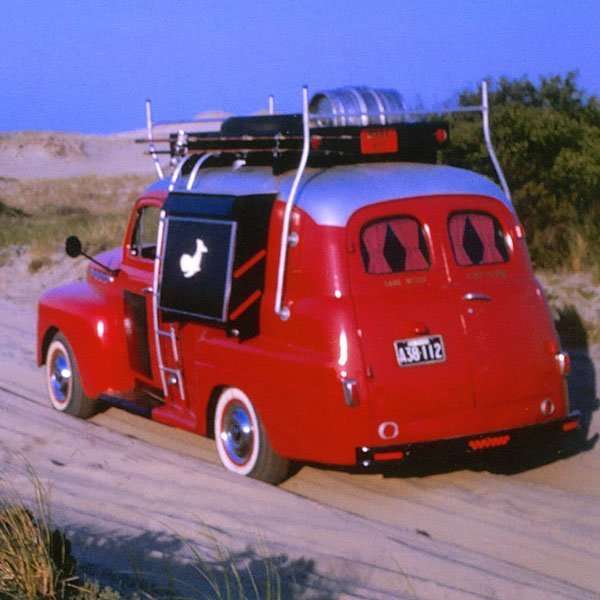 We have certainly seen our fair share of rough water and seas that have churned up a lot of seaweed this past couple weeks, but that all seems to be cleared out and the fall run is definitely happening. There has definitely been a big slow down of traffic through the shop this month so our information chain has been reliant on the same people these last couple of weeks. Just the other day we suddenly (light went on !) realized this. We had given so much thought to the reasoning that it has to do with the weather. But over the last few days, we have come to realize that in the fall, we relied heavily on the beach buggy guys for news and information. These are the guys that helped supported us in the fall. Flats of worms went out the door, bags of clams, mackerel for the chunk fishermen. These guys that would float in and out of the shop all of September and October bringing us the “word from the beach”.  To see the trucks roll in always brought a sense of excitement, to see the fishermen that you wait every fall to see, to catch up on what is happening in their families, to talk about the good old days while trying to predict what this year would bring. Dam it, we miss you and this fall, and suppose the rest of the falls on the island will be forever changed.

BIRDS ARE WORKING THE OCEANFRONT James Cowig just popped into the shop to say the birds are putting on a show. So the “be right back” sign went onto the door and I ran up to the beach to take a few pics. So this is the center looking just north up the beach to the sandbar. Martha just also sent this video in. She’s at the sandbar so it’s a much better video. Enjoy 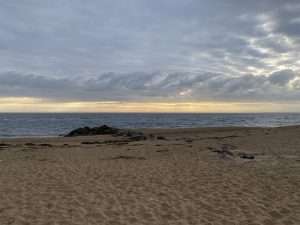 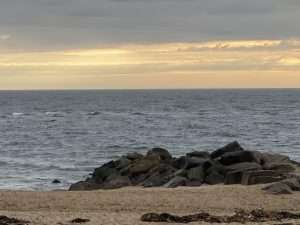 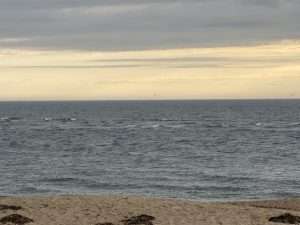 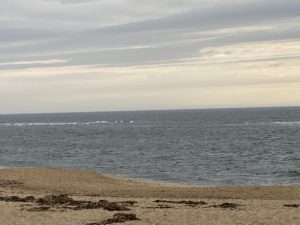 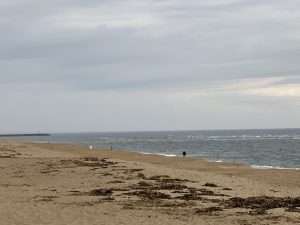 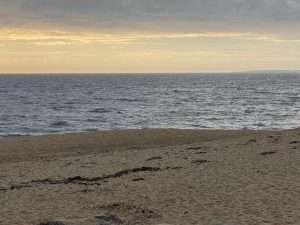 The fishermen that are still coming out have kept us informed that there are fish to catch. As usual, some days better than others, but that is the way that goes, as you all know so well. This past week, there have been some fish being caught at daybreak along the oceanfront here by the shop. Frank, was just in again before he left. This guy is the Shad King of the Ocean. He has caught more shad than anything from the front beach this year, but this week he has had some bass mixed in with the shad. Small ones, but still fun on light tackle. Since the PRWR doesn’t open until sunrise(hmmm)  a lot of the guys have been parking at the shop and fishing the front out here until they can get into the refuge. Once in the PRWR, we have had different reports from up and down the beach. There seems to be a lot of fish working bait just off the beach. Martha sent in this video from the beach earlier this week. So for those of you that are not ready to hang it up, get out here!

We know the run is still going strong because we do get the call from a few guys in Maine. A lot of them are still looking for live eels (among other baits) because the fishing in Southern Maine this fall has been incredible. They quietly work their way down the coast until they make a stop on Plum Island. We’ve also seen the fly fishermen back out since the winds have died down.  Jean-Michel sent us this photo last week and then was here at the shop the other day to try his luck  down on the PRWR.

Thought I’d share a photo of this beauty. Caught on the fly yesterday at Higgins Beach, Maine.  Season far from over!

Andrew Robertson sent in these photos from a break he took to fish the Vineyard:

Took a break from the Rez last week and took the wife to MV… Mid September is the time to go… Shout out to Surfland (some guy from VT who didn’t know how to work the register;) for re-spooling my reels the week before, those albies rip some line!
Heard the Bluefish fishing ain’t bad either!!! 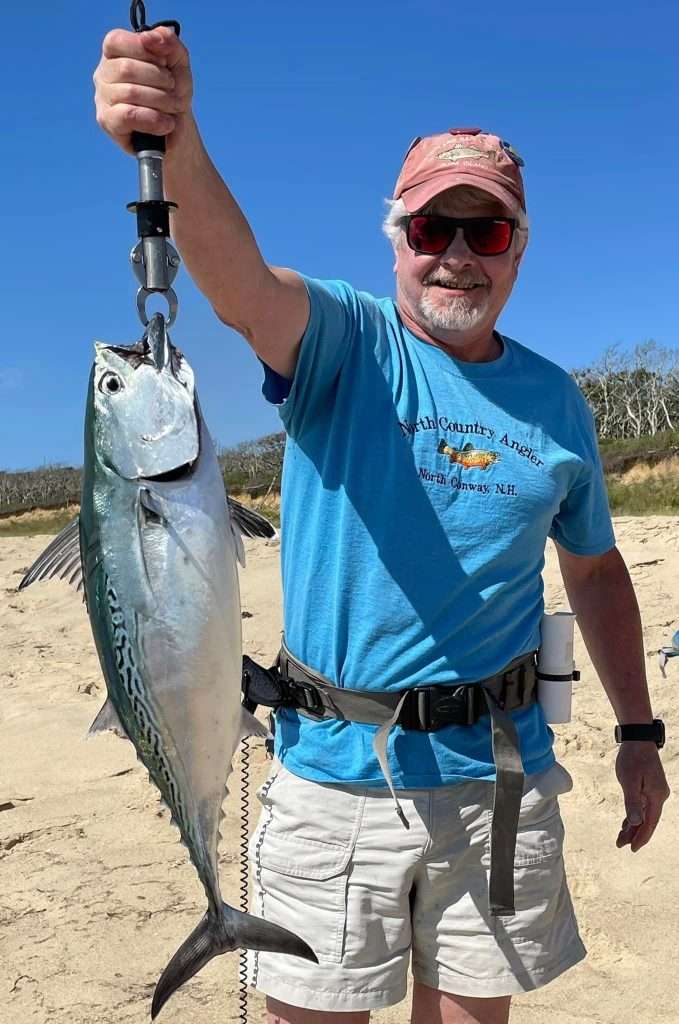 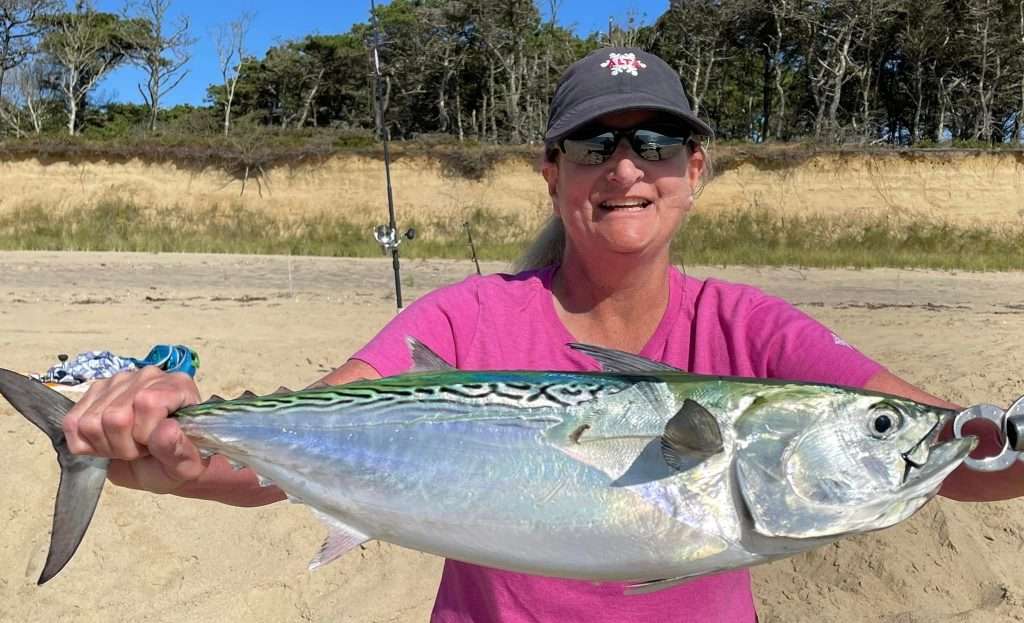 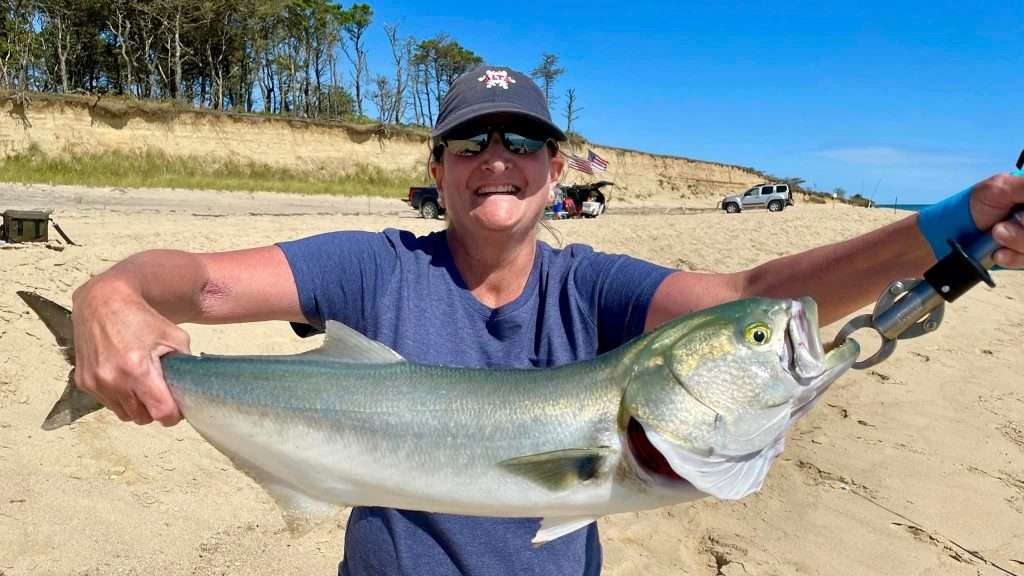 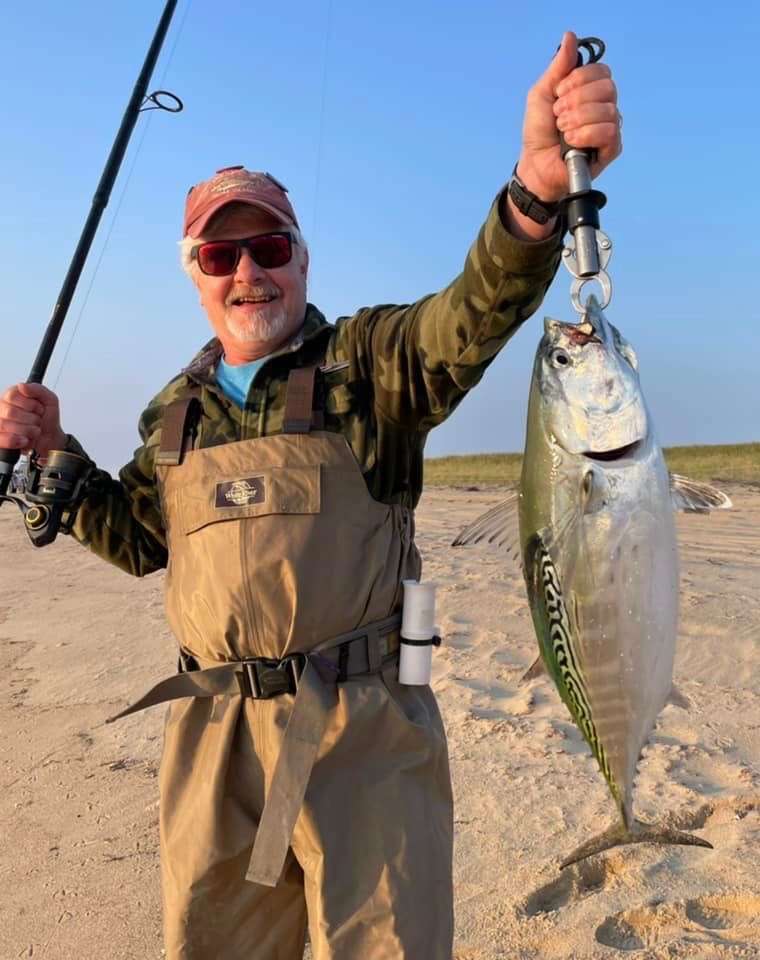 A long time ago, Bill Christy was a fixture of the Plum Island Fishing scene. Since moving away all those years ago he continues to show us support!!! All while doing some good! Thanks WF Christy! Miss you! 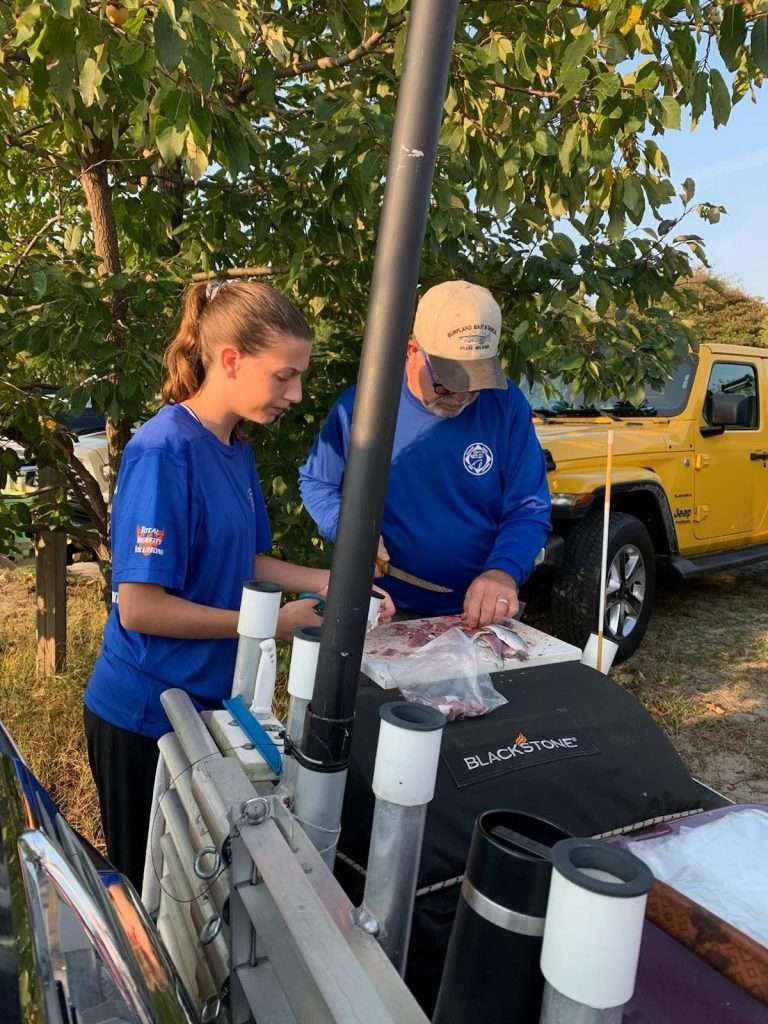 Hey Michael, have a happy birthday and a better trip to Montauk. Thanks for the shout out and good luck on your trip!

THANK YOU GUYS SO MUCH MADE MY BIRTHDAY GREAT. CANT WAIT TO TRY THIS SURF TOP IN MONTAUK THIS WEEKEND. 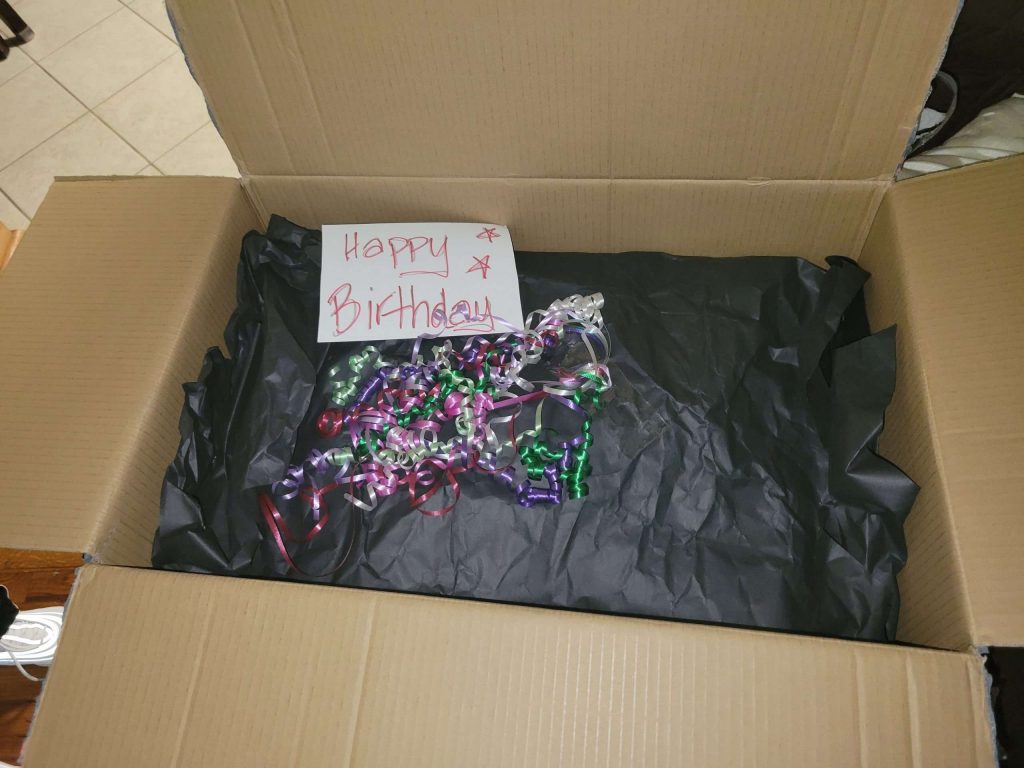 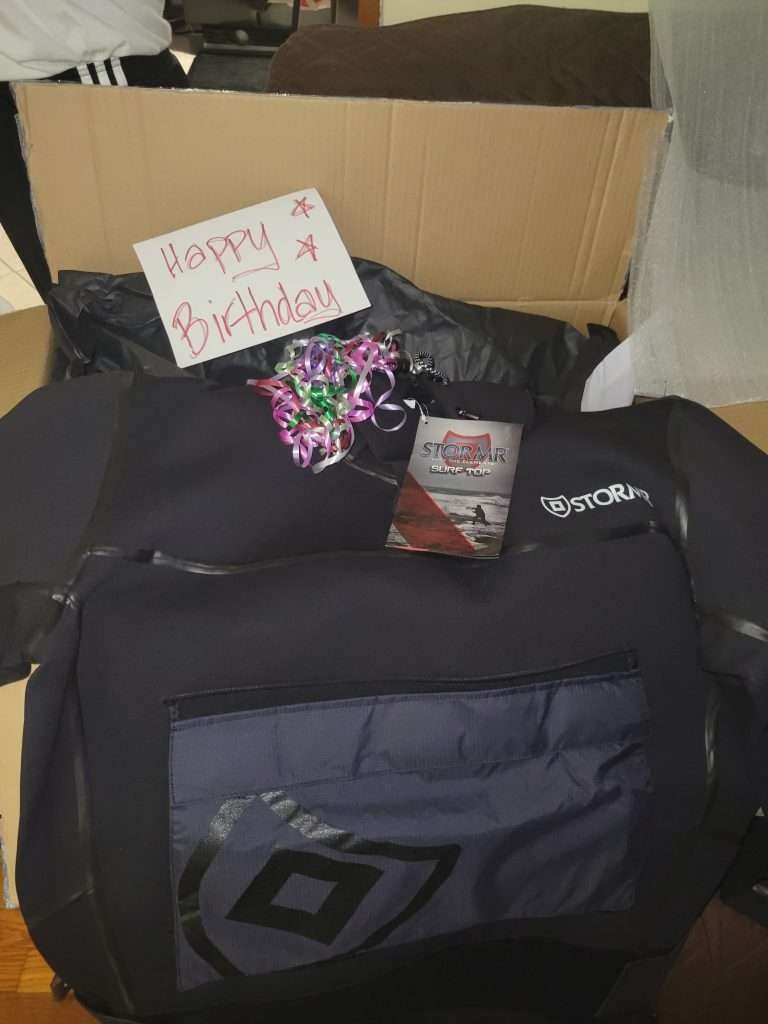 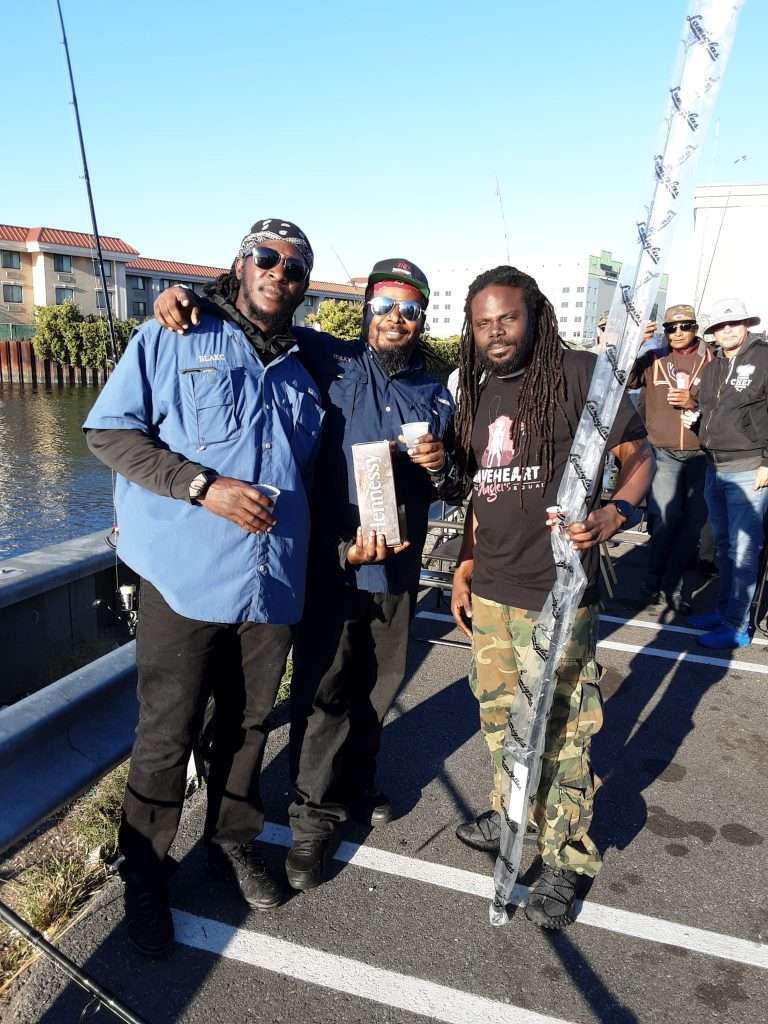