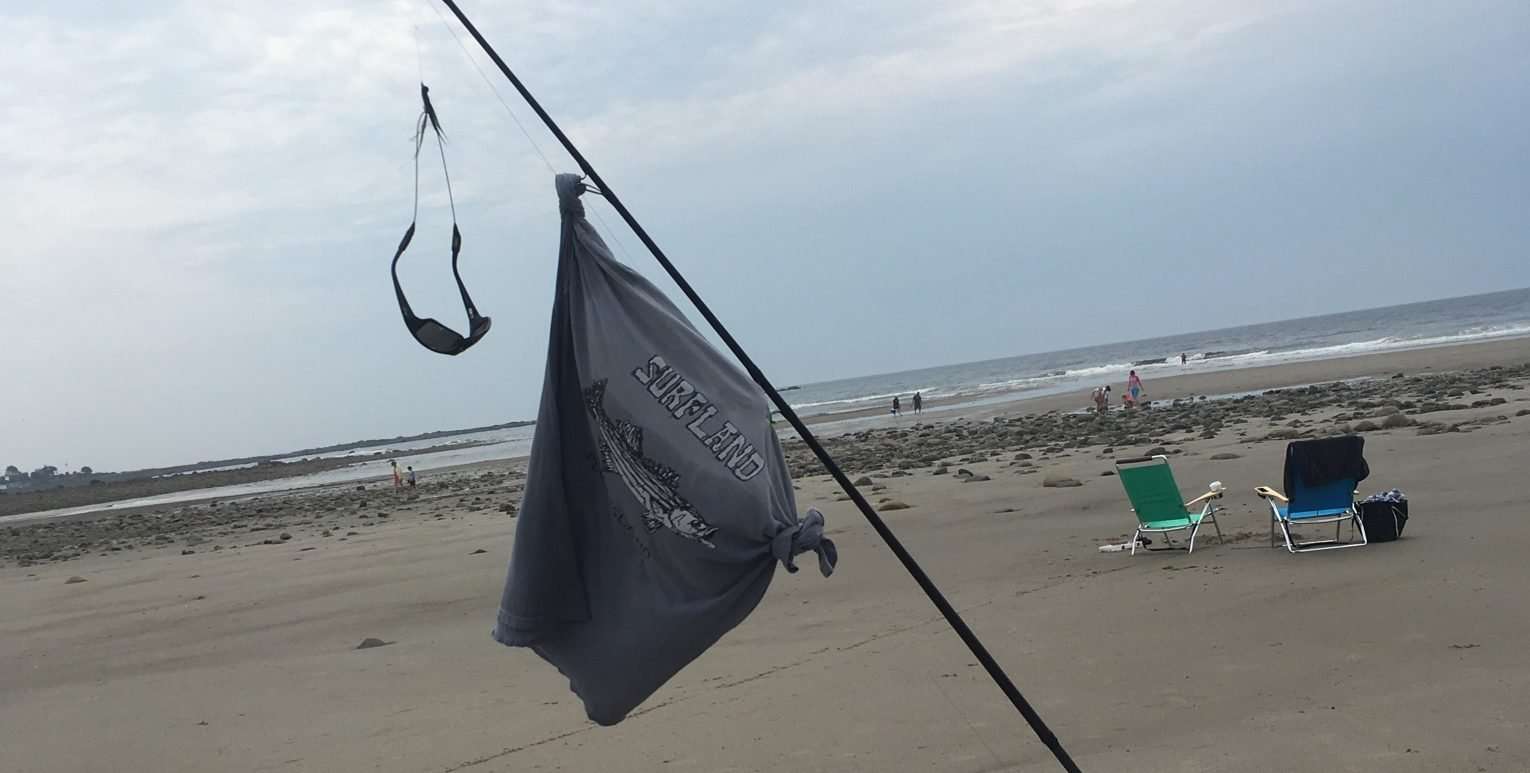 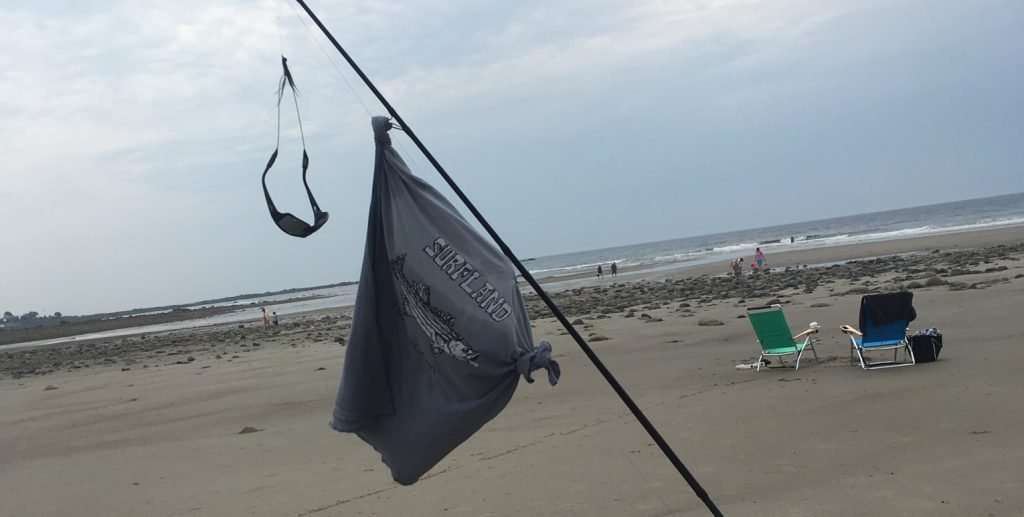 July has started with a bang! There are fish everywhere! And all kinds of fish. Everyone is telling us there are stripers, both big and small all over the place. Some days they are just rolling around and you cant get them to take anything because they are just not hungry or they are busy gobbling up whatever bait fish they have targeted. Reports of fields of pogies all along the oceanfront, with some being washed up along the shore by stripers or other fish chasing them or fishermen snagging them with plug fishing for stripers. Yesterdays biggest news was the tuna just outside the mouth of the Merrimac and along the oceanfront chasing a “wave” of pogies. Many reports of what looked like a wave of fish coming at you and then tuna busting through them chasing their meal. One boater said it was the coolest thing he has ever seen. Fisherman from the beach also reported seeing tuna jumping out front. Then the bait fish were pushed in close to shore and the bigger stripers had a feast. We had a group of fisherman on the beach out front of the shop and one of them Steve sent us in a report:

side note: (Micah Dean Sand Eel is not available anymore, we wish it was! Maybe this report will get him to change his mind and produce us some!)

I first want to thank you for letting me park in your lot for a couple of hours this morning! Pics below of a fish I caught around 7AM. Myself and a buddy started around 5:20 AM. About 200 yards off the beach there were huge schools of nervous pogies (confirmed as I accidentally snagged a couple) which on occasion would come just within casting distance. Finally around 7AM a big school swung within feet of shore and I hooked this fish. A long fight as I prefer lighter tackle, 20 lb braid and 25 lb fluorocarbon leader. After some long runs, was able to beach it. Some quick pics and released to fight another day. I didn’t have a scale or a tape, but 45″ and 35 lbs might be a good guess? Fish was caught on a Micah Dean Sand Eel, which I bought from the shop 3-4 years ago. I have two of them…..they are great plugs. I use a Penn 450 SSG which I also bought from your shop, and have had it serviced a couple times by you as well! A great reel, what a workhorse. Also, way off the beach, maybe 500 yards were some big splashes. I cannot imagine stripers making those splashes? Maybe some football tuna out there on the pogies too?

Thanks again, happy 4th, see you next time. 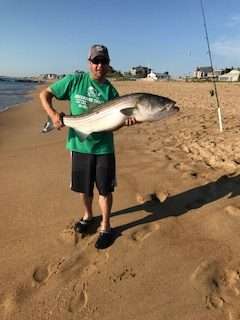 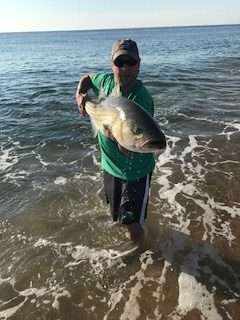 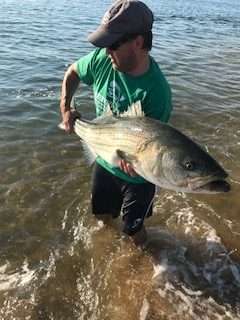 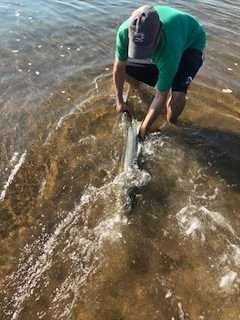 On July 1st Steve Bischof of Intesity4Fish sent us this photo of a first time striper fisherman. This is Chris L, from North Easton Mass with his first striper.   He caught 20 fish and released them all!   Great job Chris! 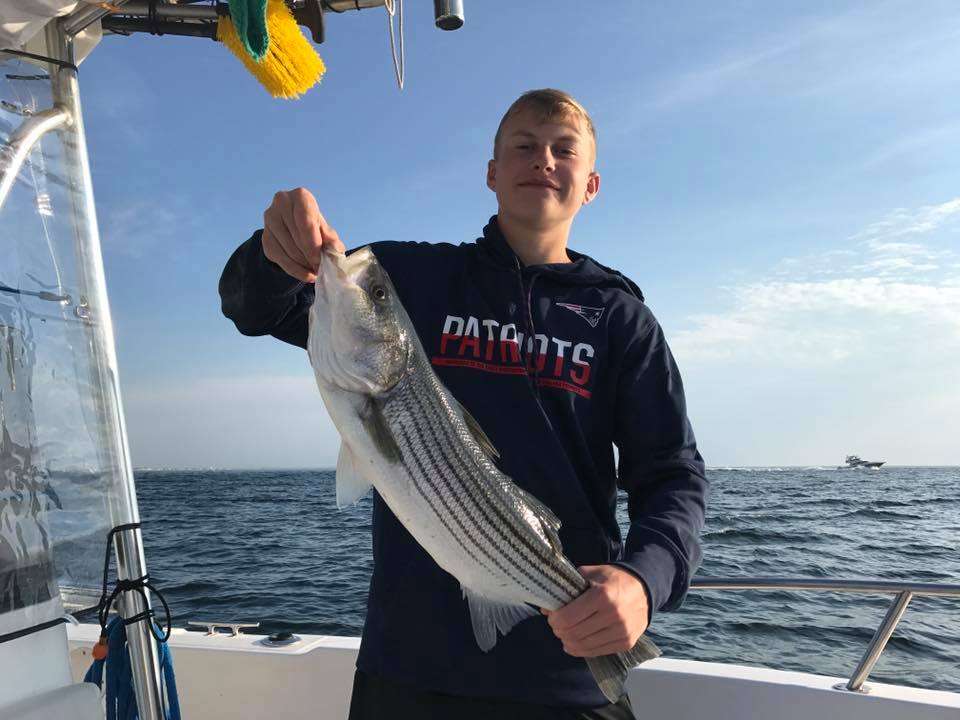 July 1st started off with 3 fish being weighed in at the shop:

Nancy Holt has certainly caught the fishing bug. Here she is this time with a keeper sized striper. Nancy caught this fish on the PRWR-Lot 1 during the high tide. It weighed in at 8-12 pounds and was caught on mackerel.

Rob McFadden from Woburn, MA caught his first “keepah evah” at Sandy Point during the top of the outgoing tide on clams. His fish weighed in at 11-9 pounds.

And then Brandon Haak from Newburyport caught this 17-11 pounder along the oceanfront using a Green Mackerel SP Minnow.

Last night along the oceanfront Steve Drew  from Gorham ME hit the beach front with this brother-in-law Craig for the incoming tide. The stripers were chasing bait fish along the oceanfront when the two starting catching fish. Steve caught this fish on a Rebel Jumpin’ Minnow. Other fish in the same size range were also caught by both fishermen. Welcome to Plum Island Steve! 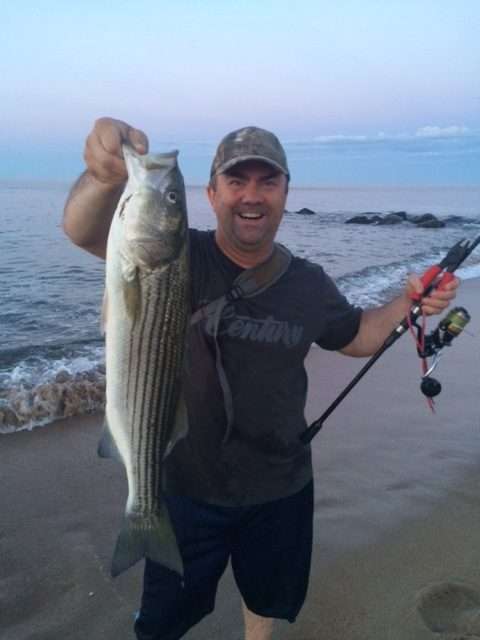 This morning bright and early Nick Hessle from Fitchburg met Kay at the door to weigh in his 12 pound, 3″ fish that he caught plugging from the beach. Early guy catches the fish!

So Happy 4th of July to everyone today. Come celebrate the day and relax on the beach and get a line wet!