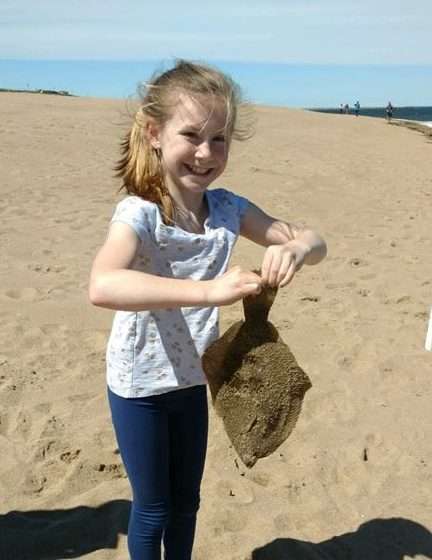 Molly Donoghue 1-flounder and 1 striper. Will Donoghue 1 striper. We had a few more schoolies as well. All out front on worms. The kids where very excited to come to plum. My oldest boy was excited to get his surfland sticker on his new car!

Other reports and information we gathered from the weekend had fish being caught everywhere.

At low tide on Saturday at the “point” in the Merrimack (we call the beach to the right of Captain’s Fishing Parties the “point”), most fish were caught on seaworms.  On Sunday, most fish were caught with white paddletail jigs.  Saltwater 4″ Bass Assassin’s, Savage Real Pearl Sandeel Jigs, and Al Gag’s Whip-It Fish were all productive.  Biggest fish was 29″.  Today, starting around 10AM, fishermen were coming in to grab more stock saying that there were lots of fish being caught at the point all morning.   Even some fly fishermen were out there over the past few days catching fish.

Shad at Rock’s Village Bridge had been productive and then a few slow days last Thursday and Friday.  But it has picked back up again over the weekend.   Flutterspoons, darts, and some flies are being utilized to catch the shad.

Haven’t heard of mackerel yet in the area, but they are in Boston and Gloucester Harbors.