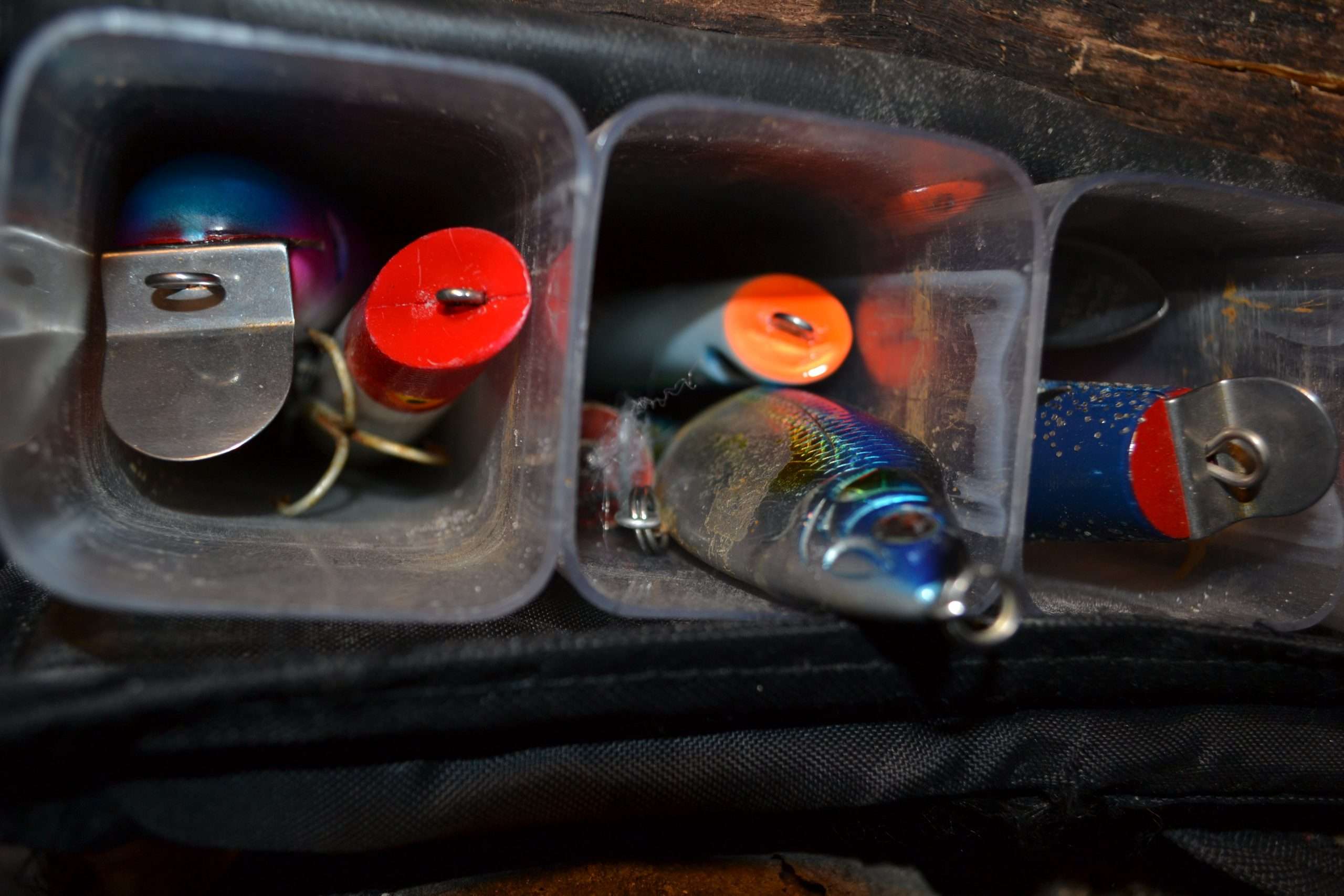 Posted at 16:42h in Uncategorized by Steve 2 Comments
0 Likes 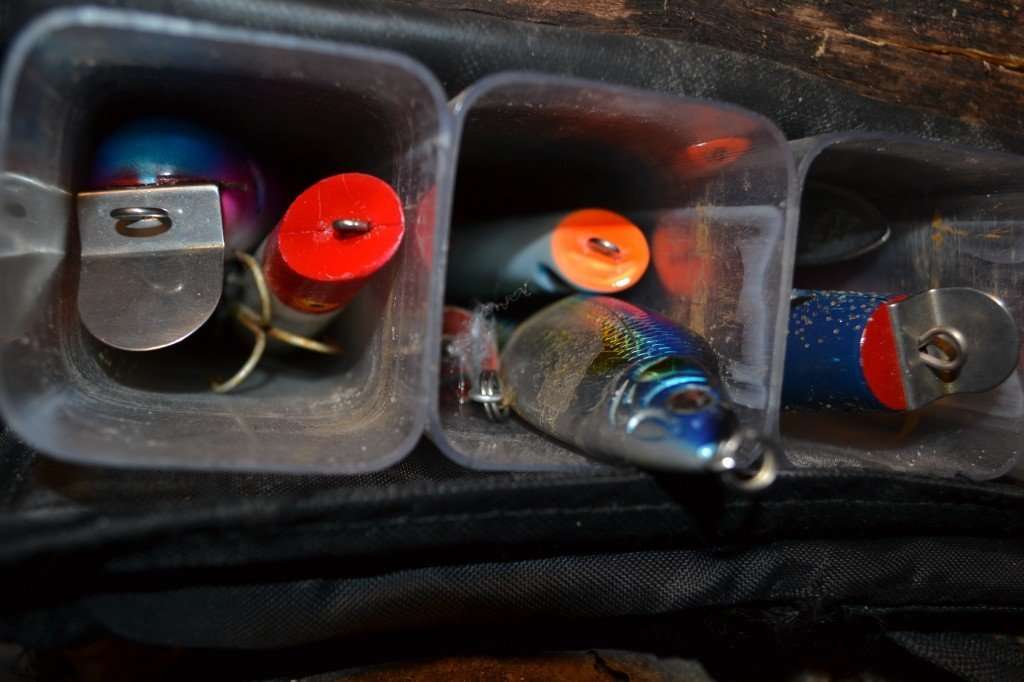 Much like a Boy-Scout, I like to be prepared for any situation when it comes to surf-fishing. If you are like me, your plug bag is likely packed to capacity at all times. Before any outing, I would assemble my arsenal for whatever bait & conditions I think I may encounter. I started to consider this past season, “What if I could only choose 5 lures to have in my bag at all times?”. For most of us this would cause a panic attack. Realistically if you’ve done your homework and you have an idea of what bait are present and where you are fishing at a given time, you can effectively thin down your lure selection to a few lures. However knowing what the fish are feeding on is not always easy. My thinking is that if you can cover the entire water column from the surface to the bottom, you stand a great chance of connecting with fish where they are feeding.  Sometimes it just takes some experimenting. I have narrowed my list down to the following 5 lures. Keep in mind these are my picks for Plum Island and the surrounding areas, depending on where you are may vary your particular lure selection. I am no expert, but this is what works for me…. 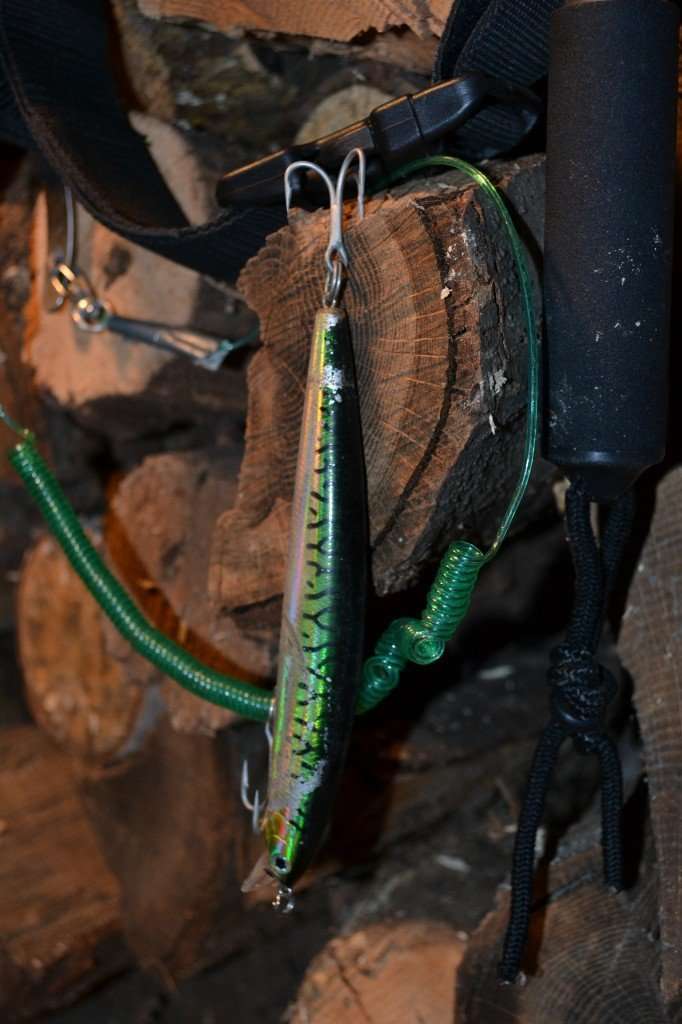 I discovered this lure the past season and was immediately convinced of its effectiveness. Its baitfish shape matches much of the forage in our area such as mackerel and herring. It’s even slender enough to pass for a Sandeel. It resembles many Yo-Zuri’s and other standard suspending Rapalas, but there is something about the tight wiggle and action that out fishes both. The Daiwa SP also features a internal rattle system which not only attracts fish but also shifts the weight during casting for maximum distance. I have casted this lure accurately when all other plugs in my bag were being blown off course by a headwind. The Daiwa SP swims about a foot or so under the surface and stays perfectly still when paused, an especially deadly practice for finicky fish. One recommendation I would make would be to swap out the stock hooks for stronger VMCs (a lesson I learned the hard way this season after a bent hook and a broken heart). 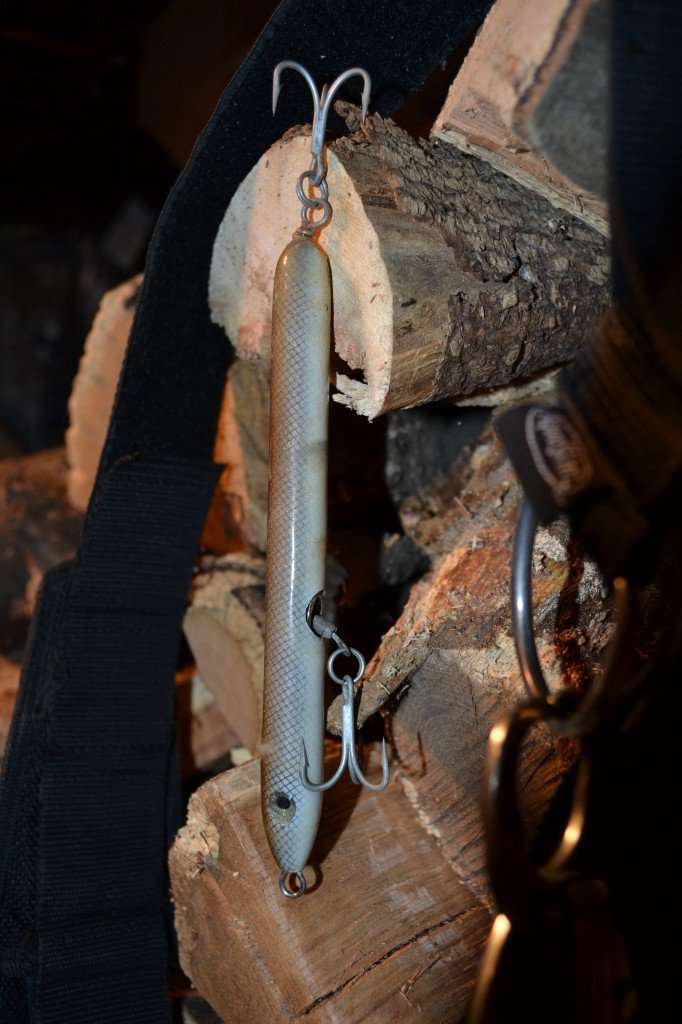 When I first was introduced to the Micah Dean Sandeel, I thought this was a lure that specifically worked on Cranes’ Beach. Indeed, this lure is downright DEADLY on Cranes. It’s a very narrow profile lure which as its name implies, imitates a sandeel. It has little side to side action and mostly tracks straight with a moderate retrieve. However this past season I have experimented with this lure on the South End of Plum Island with great success. I think this lure excels in shallow beaches with a mellower slope. Cranes is a shallow beach which gradually deepens. In fact you can wade almost 100 yds from the beach and be no more than waist deep. Unlike the steep beaches of the rest of the Island, Lot Six and the Emerson Rocks area of Plum Island are quite gradual. It seems to be much more like Cranes then the rest of the Island. This is a floating lure which I usually fish at first or last light. I employ a slow retrieve with occasional twitches from the rod tip. The lure comes in two colors, a sandeel coloration and a darker mostly black pattern. Both have their own applications. I like the dark color in the lowest pre-dawn conditions and on overcast days. The Sandeel color seems to work best on bright sunrises and typical sunsets. 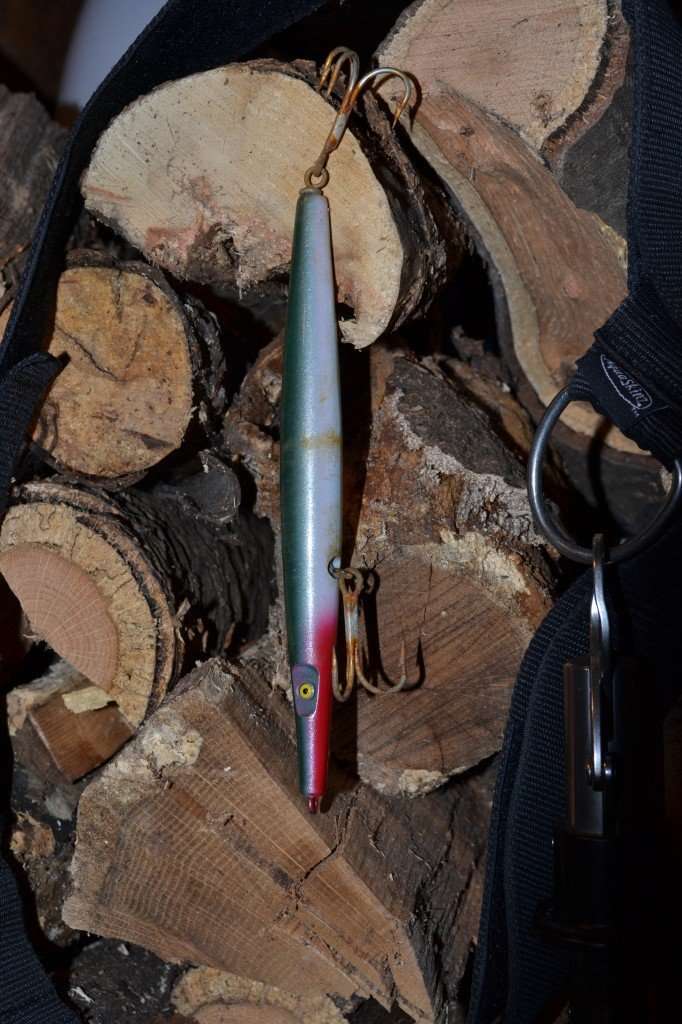 I am a firm believer in Sandeel imitations in our area. Over the past few years the majority of forage and feeding I have personally witnessed have been on Sandeels. The SuperStrike NeedleFish matches this hatch perfectly. Unlike the Micah Dean Sandeel which is strictly a surface lure, the SuperStrike Needlefish can fish the entire water column. The sinking version of this lure can be fished at a variety of depths depending on how long you let it sink and your retrieve speed. Like the Micah Dean, it has little side to side action, but this is not detrimental to its success. In fact at night I have found it’s most effective at a very slow, deliberate retrieve. The lure comes in a variety of color ways. I am not a stickler for color, I believe in lighter colors during the day and darker at night. Another nice feature of this lure is it comes with saltwater ready hardware. No need to swap the hooks and rings out for stronger ones. 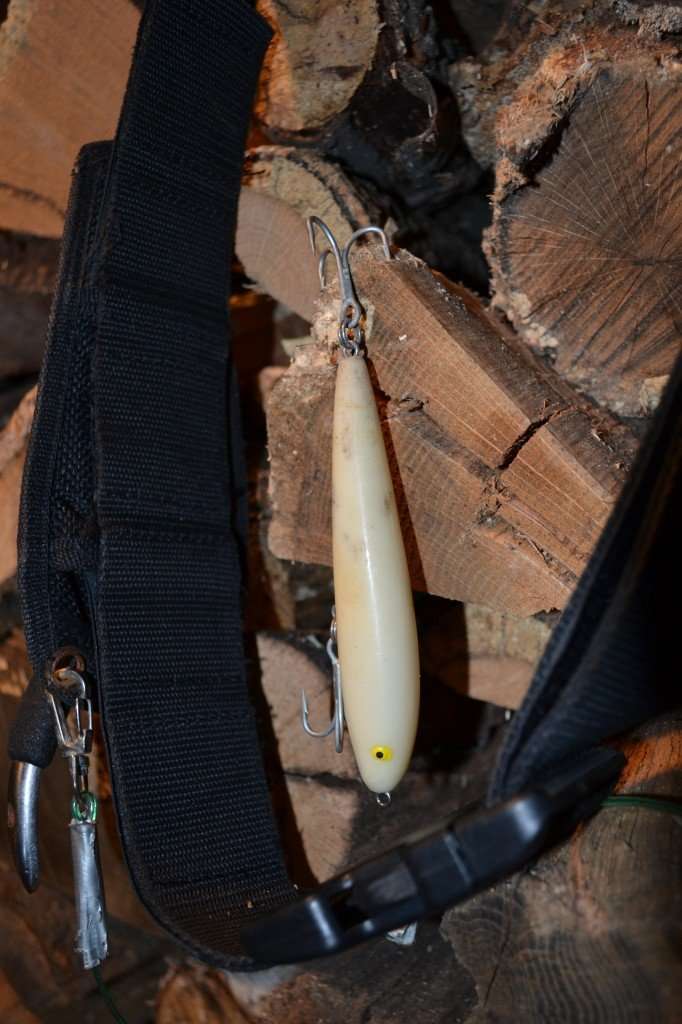 What can I say about this lure? Well for one it’s probably the most fun to fish with. The walk the dog action and the surface strikes it draws are second to none. There is something about its exaggerated side to side action that simply drives fish nuts. Not only will it draw attention in the craziest of surface feeds, but it will also coax otherwise lazy fish into a instinct strike even when not feeding. It comes in a few different color ways, but don’t waste your time. The all white “bone” color is by far the most effective in my experience. Work this lure like you would a normal pencil popper and watch it dance from side to side so well you may want to take a bite. It’s not the heaviest lure out there but it’s aerodynamic shape helps it cast further than normal open face poppers in the same weight class. You will definitely want to change out the hooks and ring on this lure, as they are very weak and will not stand up to large stripers and blues. 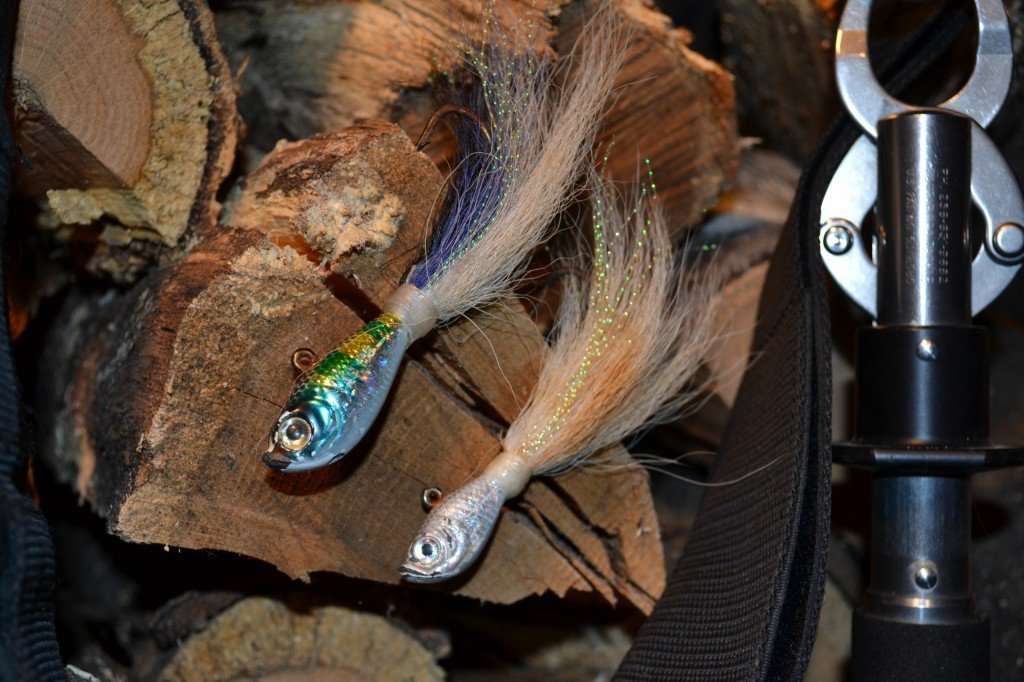 Although there are many bucktails on the market, I have developed a certain affinity for the “Spro” brand. They are tied with exceptional quality and come in a variety of color ways and weights. Until a few years ago, I was very reluctant to use a bucktail. My first thought was “That doesn’t look like any other fish I’ve seen”. But indeed it imitates almost all baitfish out there, especially when paired with a pork-rind teaser. The advantages of the bucktail are numerous. For one, you can fish almost every portion of the water column depending on how long you let it sink and your retrieve. Another advantage is it’s slim profile, which allows you to cast the lure into strong headwinds. It also holds it’s position and tracks better in rough water, making this the ideal lure for fishing white water that often occurs around storms in our area. This past season I fished bucktails in some of the roughest water I have ever fished on lot six of the PRWR. To my surprise I was able to pull many fish out the rolling white-water, making me firm believe in these lures and their endless versatility.

All of these lures are available at Surfland Bait & Tackle.

Have a different load out for your bag? Let me know in the comments below!!