Jack Mitchell passed away this week. He was a favorite of mine and Kay’s. He was my “Crusty Barnacle”!
.
In 2006 he was featured in Stickman’s local documentary “Fishermen of Plum Island.” Here is a brief clip of Jack sitting in front of his truck down by Emerson Rocks. He usually had about 6 rods out. He loved the beach.
– Martha
. 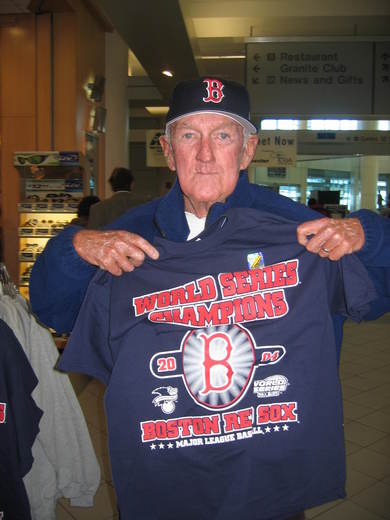 .
Here is his obituary:
CHELMSFORD– John J. “Jack” Mitchell, 83, a resident of Chelmsford, died Monday, July 23rd at a Boston hospital after a brief illness. He was the beloved husband of Margaret M. (O’Donnell) Mitchell, with whom he would have celebrated 55 years of marriage in August.
.
Born in Auburn, NY on December 24, 1928, and was a son of the late Henry and Kathleen (Connor) Mitchell.
.
Jack grew up in Auburn NY and served his country in the U.S. Army during World War II. He graduated from St. Bonaventure University in NY, under the GI bill and attended Suffolk University School of Law in Boston.
.
Prior to his retirement, he spent 32 years of his career in executive positions at Interstate Systems, and then was later employed by Consolidated Freightways and Trans-Logistics, where he established great friendships with customers and co-workers alike.
.
Jack was an avid Red Sox fan and also enjoyed golf, fishing, and great music. He appreciated the outdoors and taught his children to love and respect nature. He also relished being around other people, especially his loving family.
.
Jack was a parishioner of St. John the Evangelist in North Chelmsford and was a member of the Nabnasset American Legion, Post 437 in Westford, MA.
.
In addition to his wife, Jack is survived by three daughters, Cheryl Ducharme and her husband Donnie of Chelmsford, Doreen Mitchell-Bernberg of New Orleans, LA, and Pam Clark and her husband Tadd of Groton and his son-in-law, Dominic Gioia of Arcade, NY; seven adored grandchildren, Maple, Jonathan, Patricia, Danielle, Ariel, Adam, and Kyla; his sister Jean Reynolds of Auburn, NY; and several wonderful nieces and nephews. He was also the father of the late and beloved Sharon Gioia who died in 2006.
.
Visitation will be held on Thursday from 4 until 8PM at Blake Funeral Home, 24 Worthen Street, Chelmsford, MA. His Funeral Mass will be celebrated on Friday at 11 o’clock at St. John the Evangelist Church in N. Chelmsford. In lieu of flowers, donations may be made in Jack’s name to the Salvation Army of Greater Lowell, 150 Appleton St., Lowell, 01852.
.
Jack’s memory page: Click Here