Well, it is now Sunday night and it is now a quiet time in the store so I will tell what we have heard about the weekend. Again, the last few days have seen fish chasing baby herring up and down the beach. It has been at different times of the day, but with the majority being late afternoon/early evening. The difference now is that it is really getting hard to catch them. They must be getting quite full on the acres of bait fish that everyone has been telling us about. Walking the beach early afternoon today I saw birds darting back and forth just above the water, but not many diving. MAybe the baitfish were too deep. I didn’t see anything busting the surface. A few fishermen from the beach were casting in the direction of the birds but I saw no one hook up. The boats were congregated on the other side of the birds, but again, I saw no hook ups. That has been the action this weekend up until late this afternoon / early evening when on the guys came in to tell us that he got small bluefish down at parking lot 1 on the refuge. We do know that there have been small blues running with the bass, so at least these fiesty creatures are biting.
~~~~~~~~~~~~~~~~
Joppa…………….the only action we have seen from this body of water is a few bass that the guys think are coming in on the incoming tide with the cooler water. Other than that….quiet. But with the July heat, that can be expected.
~~~~~~~~~~~~~~~~
Flounder………again out of a boat in the mid thirty feet range is where we have heard of any action. It has been a very slow year from the beach for flounder.
~~~~~~~~~~~~~~~~
This is a picture of the bait fish the stripers and blues are feeding on 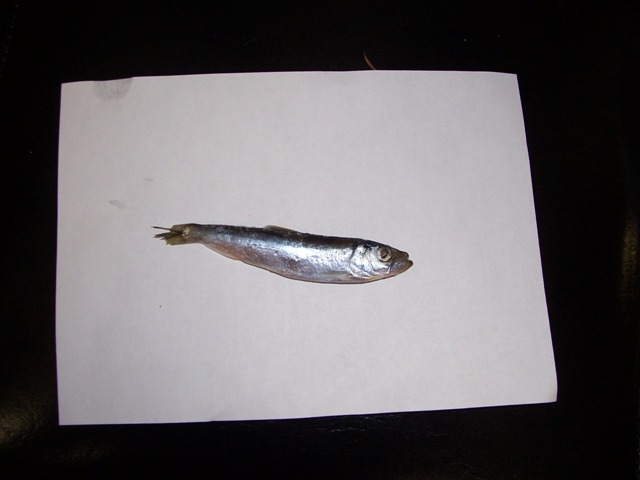