July 16, A tale of two sturgeon 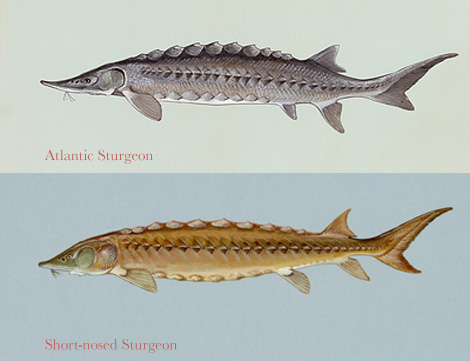 It was the best of times, it was the worst of times. The Merrimack river abounds with life today, but has in it’s lifetime been a dead stretch of water as well. One of our resilient species that live here is the Sturgeon, a dinosaur of fish. Against the odds, the Sturgeon has slowly rekindled it’s numbers and is showing up on the surface, in the air, and at the ends of our fishermen’s lines quite by accident.

There’s an excellent article about a local catch of Sturgeon in the Newburyport Daily News from 2007. In the article (see it here), they mention how the local fish can grow up to 15 feet long and live up to 60, yes, 60 years old! “The fish usually spawn in rivers. Juveniles stay in the fresh or brackish water for one to six years before moving out to the oceans. The fish tend to stay close to the shore when they become adults.”
.
Well this has been a banner year for our bony-plated friends around the river. I’ve seen at least 5 this past June. “How?” you wonder? For no readily understood reason, Sturgeon love to jump straight out of the water about one and a half times their length, and scare the life out of us fishermen. They really come straight up, like a missile fired from a submarine. And given the size of your average sturgeon around here that can be a 3-6 foot long rocket coming all the way out of the water, then landing back with an enormous splash.
.
When you catch one of these giants leaping out the side of your vision you’ll have no idea what you just saw. They do have a distinct shape, that’s unlike any other fish you’re likely to see around here. You’ll see from the photos we have here that this ain’t no burly bass.
.
Another article in the local paper talks about the more common of the local inhabitants, the Short-Nosed Sturgeon. You can read about that here. Far more rare is the Atlantic Sturgeon, but they are sometimes seen around the Merrimack as well. There is even a page devoted to Sturgeon on the ReelTime Forums called “The Sturgeon Club”
.
July was a banner month, or a terrible month depending on your feelings towards hooking Sturgeon. We got reports from two of our guys who, while hunting down wiley Striped Bass, hooked instead a giant flat-nosed relic from time gone by.
.
The first of our reports came from July 8, when I got this message from Timothy K.
“Caught last night between the Jetty’s at 9pm on the outgoing.
Took 30+minuetes to land on 20lb. tackle.
Using a special bait we like to call the “Merrimack Octapi”
Caught by Tim Kimball from Kingston NH with the help of Jeff S from Haverhill, Ma and Jimmy D of Kingston, NH
Released unharmed.”
. 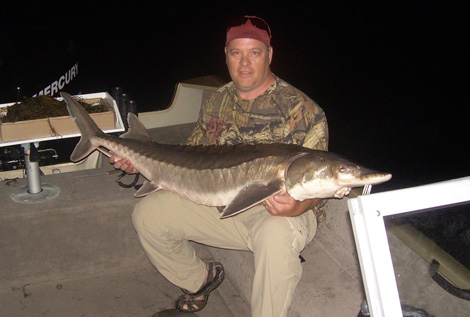 Surfland was hesitant to post the photographs, as we know that handling a Sturgeon is a complete no-no. I wrote Tim, and we discussed it, so we sent a message to Massachusetts Fish and Game to make sure. Sure enough, it’s a crime to lift it out of the water to take photos, even if you return it safely to the sea. However, we also got a note from Caleb Slater at the organization that said, “We know there are a good number of Shortnose sturgeon in the Merrimack River, but 80 lbs would be very large for a Shortnose- it could have been an Atlantic sturgeon. They are very rare. Your picture could help with an identification.”
. 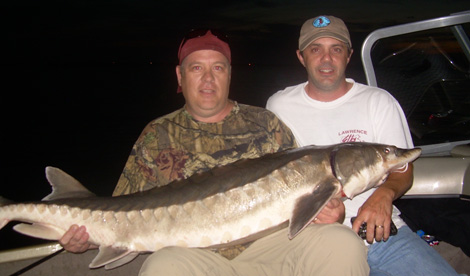 So Tim sent the photo along. He received a note back from Tom French remarking on the catch,
“Indeed, this is a fabulous fish.

This is a sub-adult Atlantic Sturgeon. In my 27 years with the state fish and wildlife agency, this is only the third large Atlantic Sturgeon that I am aware of in the Merrimack. There are always small numbers of young fish in the range of 2 feet. The other two large fish that I am aware of were found over a decade ago farther up the river, and were even larger. One was seen alive at the base of the dam and the other was found dead a short distance downstream. Atlantic Sturgeon are very long-lived and slow to mature. In the Hudson River, they are 11 to 20 years old before they begin to breed, and in the St. Lawrence River in Canada, they don’t start breeding until they are 20 to even 30 years old. These fish can be huge, up to 14 feet and 800 pounds, but these old adults are now quite rare, even in the big rivers like the Hudson. Thanks for sharing your story and the photo.”
.
No sooner had we finished our talks with Fish and Game did Surfland get another report from one of the Merrimack Regulars David H. “Check this out. The last drift at the mouth this morning I hooked (semi foul) this 6 ft+ Sturgeon. Estimated weight 70+ lbs. Surprised to keep on as I fought it 45 minutes plus with bluefish frayed 20 pound mono on 20 pound braid. Finally revived and release and swam away safe and sound. Sorry shots are not better but did not want to take out of water (illegal). FYI that is a 7.5 inch slugo so you can estimate size. Very cool. Not since a 135 lbs tarpon have I been worked that hard by a fish!” 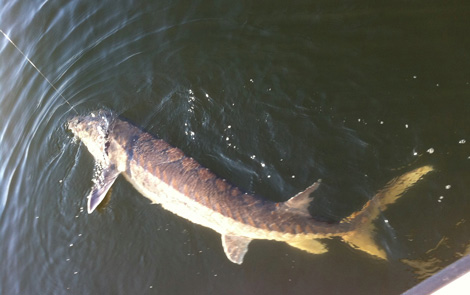 So, if you find yourself hanging on to a monster that doesn’t feel quite like a bass, bluefish or carp, you might have one of these beauties. But be forewarned, they are an Endangered Species, and should be released with the least amount of damage to the fish. Nevertheless, could be the fight of a lifetime, best of times or worst.