July 17, busy week on the water

The flats were busy last night on eels. Saw a couple of kayaks out early evening and they seemed to be doing pretty well. Two of our commericial guys have had luck with eels as well, grabbing 210lbs so far destined for local restaurants.

Today’s low tide is at 1:30, so we expect some reports later this afternoon. It’s hot a muggy out, but a nice time to wade and catch some fish. Here are some comments from our regular reporters:

Ed Kelley wrote: Wednes. 7/15….We fished Lot 1 again. Blitzing fish all day ….but out of range. But we did manage a flounder dinner though. Six flounder up to 17in. Mmm Mmm Good! The flounder were holding fairly far off the beach. We were wading out as far as we dare and then letting off a substaintial cast. We found them!

Tallman wrote: Fished the island last night (July 16) Caught a nice 35in and a 30in with striper candy.

Oh, by the way, Watch out for the penguins on the flats. 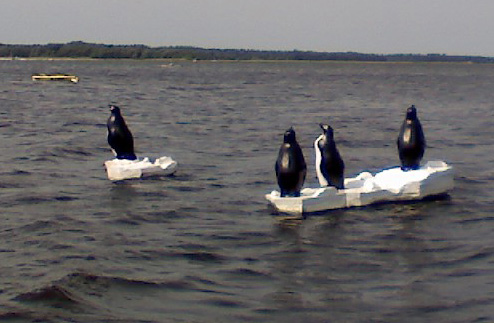