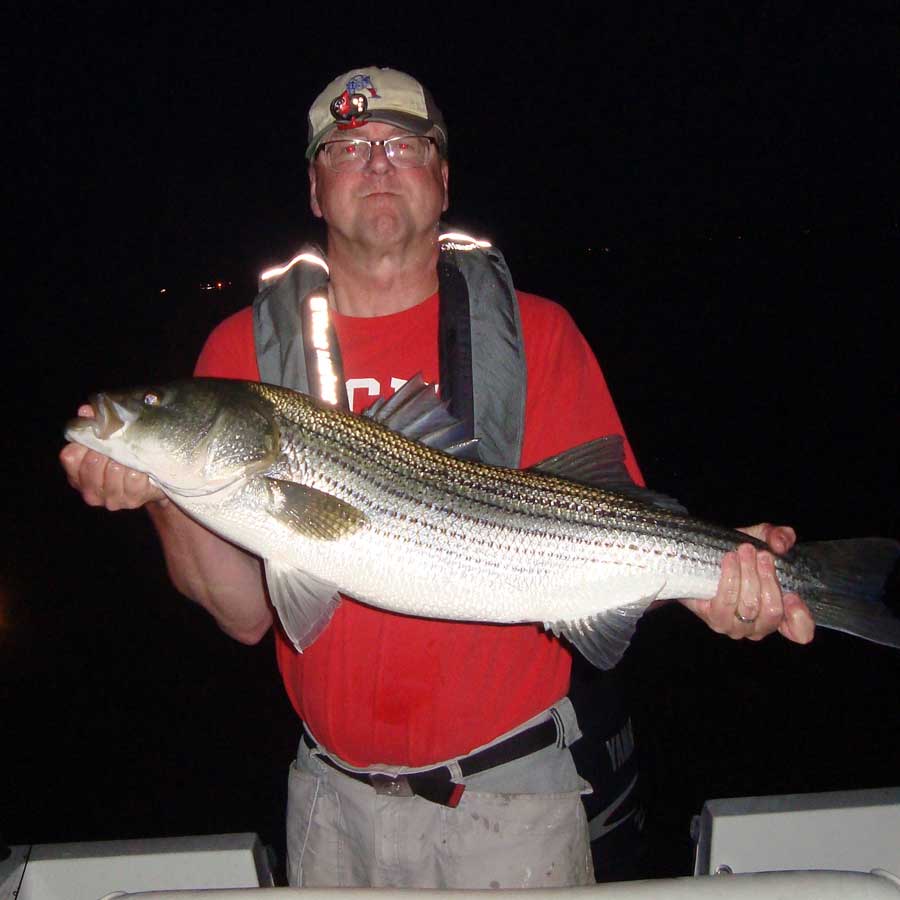 Despite the hot weather this week, the water temperature in the Merrimack, at least on the incoming tide, was still just 59 degrees last night. Even as the tide changed around 10pm, it was only up to 62 degrees. That’s pretty chilly, and the fish seem to continue to come up river for dining after dark.

I mention the tide, because the action was fast and furious from about 2 hours before high until the water got still. Then, no takers. The fish were still there judging from the continual thrashing of spooked bass as I drifted along. From the Plum Island Basin, I only have enough water to get out about 2.5 hours before high tide, so I made it out just about sunset.

There were plenty of schoolies whacking the eels I presented. In about an hour I picked up 6 fish in the mid 20″ range. I lost 5 eels in the first 20 minutes, but found one single eel that lasted for my next 3 fish. And they were the larger ones landed.

I bought a new eel casting rig from (shameless promotion) Surfland last week. A Quantum Cabo 50 reel and a 7 foot Mojo Inshore rod. Super light. I like the rod very much. It’s sensitive and springy for about 2 feet on the tip, but down at the reel end it’s stiff and has plenty of backbone for maintaining pressure on larger Stripers. the variable bend allows small fish to be as fun to catch as big ones. Anyway, it performed admirably during the incoming tide.

After the water got deeper, the action simply stopped. I got a hit now and again, but nothing like the mid-tide blitz that was going on.

Three keepers measured 36″, 38″, and 42″. The hit from the big one was really memorable. A hard, fast whack on the casted eel. Then it just ran for deeper water, drag singing along happily. 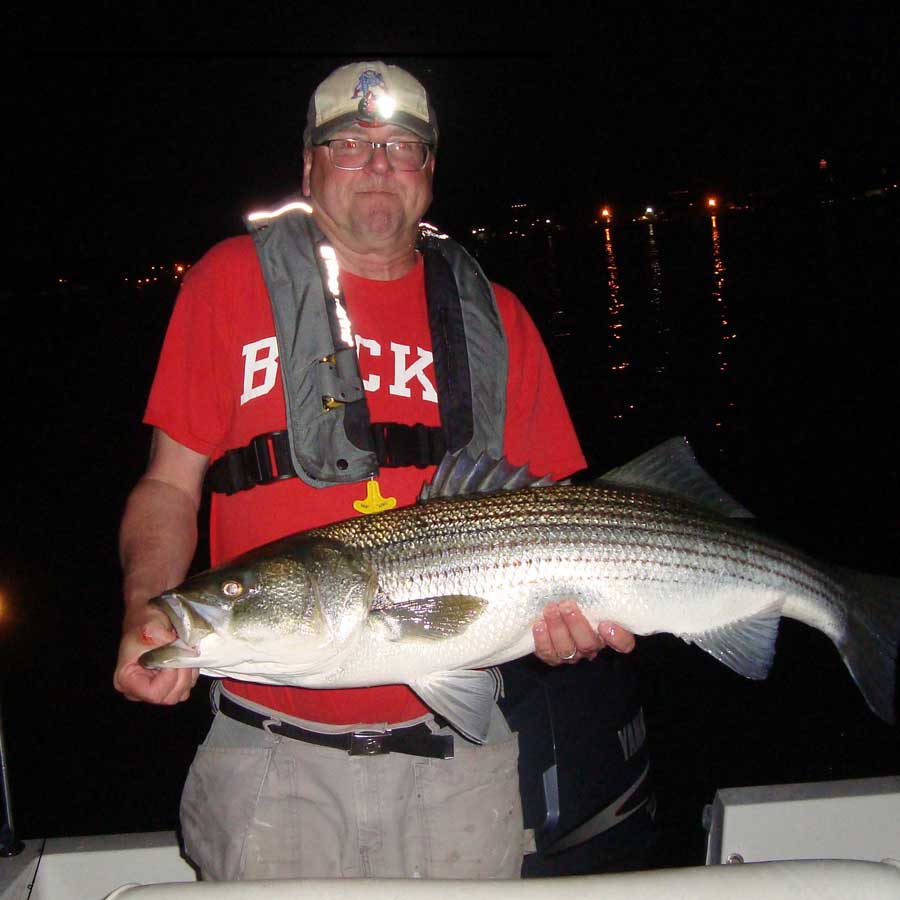 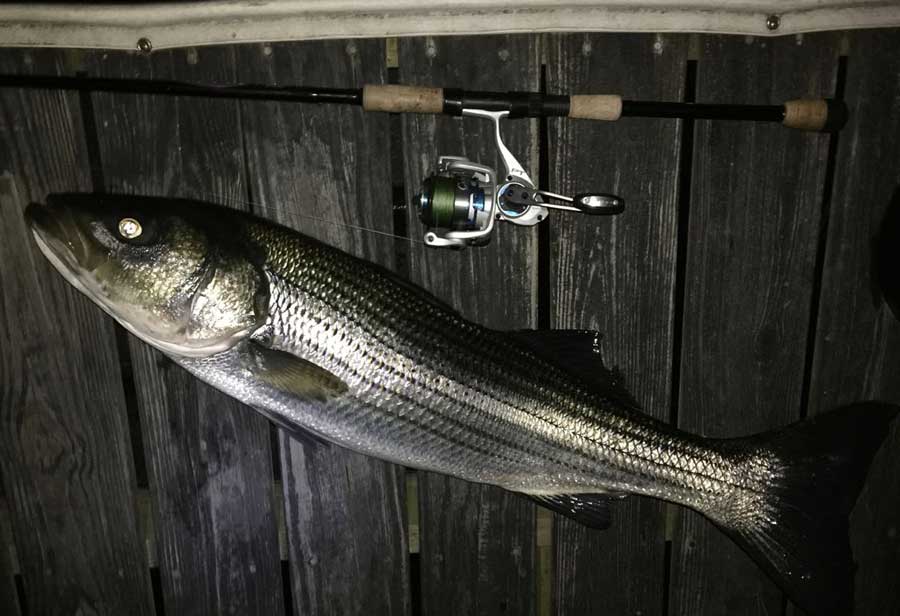 I don’t keep many fish in a season. Two or three is really enough. Folks are always asking me why I don’t keep more. First, of course, is that I’m really out there for the thrill of the hit, and to a lesser extent, the battle with the fish. I like to release the hefty fish after a quick photograph.

Secondly, I’m lazy. Fishing at night, and getting home at 1, 2, or 3 in the morning, I’m not especially interested in getting the boat in order and then cleaning and packaging a fish. For me, it’s at least a half hour of more work and less sleep.

On top of that, a 36″ fish like one I kept last night, makes a ton of meals. Take a peek below. Two fillets (and I’m pretty bad at cutting them) fill the sink. Cleaning and cutting the meat takes a bit of time, but you can see that each fillet can be divided into single serving pieces bigger than you get in a restaurant. I bag two pieces each in a sandwich bag, one for me and one for Cheryl, my wife. All told this fish made about 6 meals for two. Striper freezes well, so I’m pretty set for a month or two. 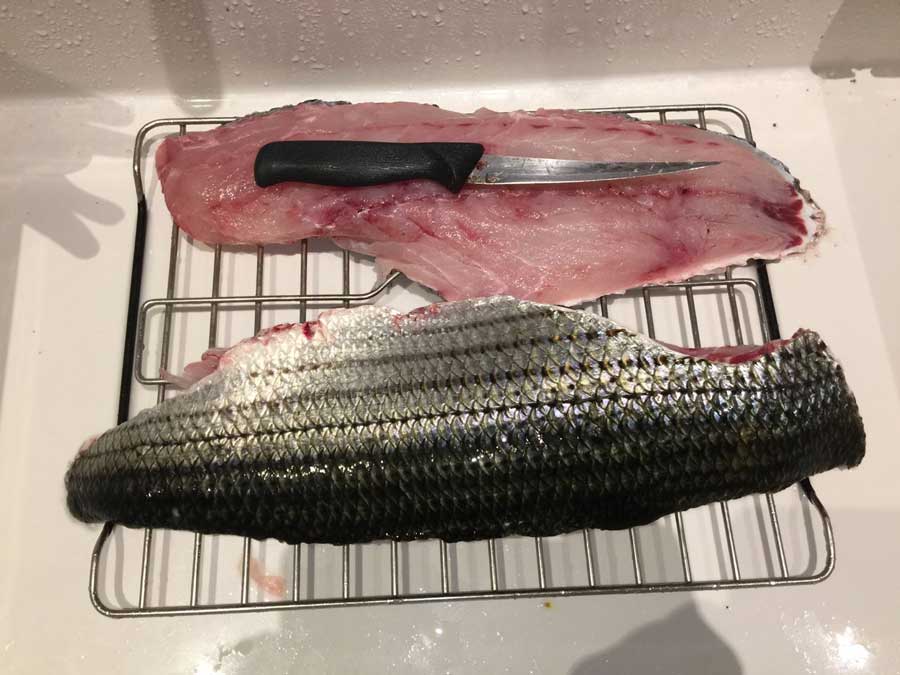 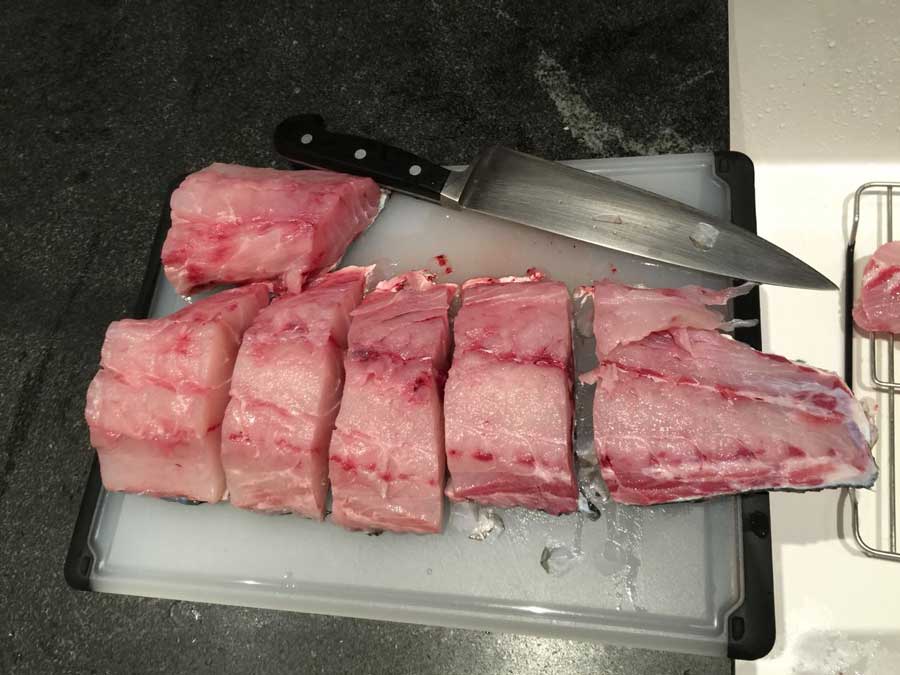 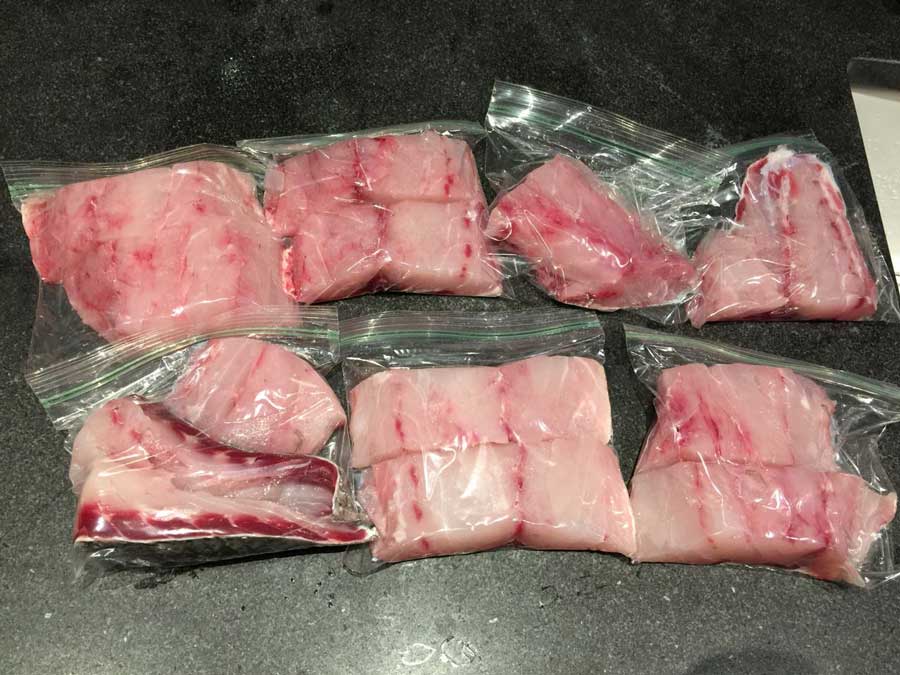 Even though I have my fish fry for a while, I’ll be out there tonight, looking for that thrill of the hit once more.