I have been remiss in my posts recently, and have no excuse other than Summertime laziness. So here is a big pile of photographs our customers have sent me, and a few stories behind them.
– Stickman
.
From Dan Walsh of Peabody, “Here’s a pic of some of the blues me and my friend Mike Murgia (holding the fish, Tewksbury) got into on the oceanside of P.I. and Crane’s Beach yesterday, July 12th around 8:30-9AM. The fish were actually just lazily strolling on the top of the water, dorsal and tail fins coming out of the water. These 2 hit on Rebel Bone color Jumping Minnows and a Smack It lure, lost a little later to an even bigger set of teeth. Crazy fun though, fish on the right was 31″, one on the left was 34”. 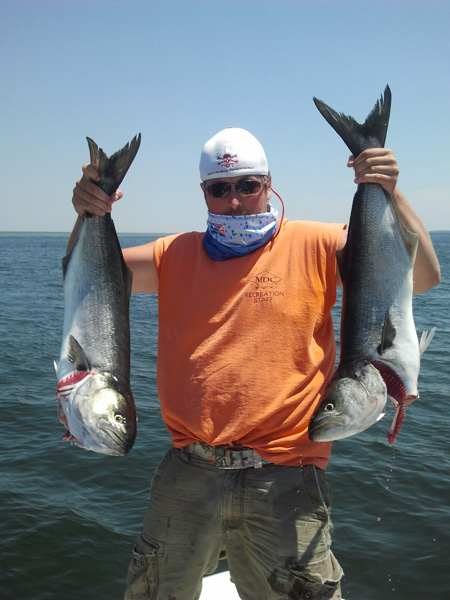 .
Bill Morgan got an interesting fish last week, “Always enjoy reading your updates… Keep up the good work. Not sure if this is worthy of including in your fish report section, but I am curious if Kay has seen these fish caught off of Plum Island.
.
I was fishing for Stripers, trolling an Umbrella rig off of High Sandy this past Wednesday night in about 60 feet of water and the rod went off. We caught a North Atlantic Electric Ray, known as a Torpedo Fish… See links below..
.
The fish was about 40 inches across and I estimate it to weigh about 40 pounds.. It provided an electric shock to the touch. Strangest fish I ever caught… I attached a couple pic’s… I have more if you want them… Video as well… The iPhone is a great fishing tool…
.
My crew that day was Ron Dolan and Tom Kearney. Tom had the honors of reeling it in and Ron was manning the net and the unlucky guy on the receiving end of the shocks.
The fish was released alive and well.
.
Let me know if the Surfland team has ever heard of this fish being caught on Plum Island.
.
Now and again we get pics of the Torpedo. A big one like yours can actually kill you, though we haven’t got any death reports.
.
http://en.wikipedia.org/wiki/Torpedo_(genus)
http://australianmuseum.net.au/Short-tail-Torpedo-Ray-Torpedo-macneilli-Whitley-1932/ 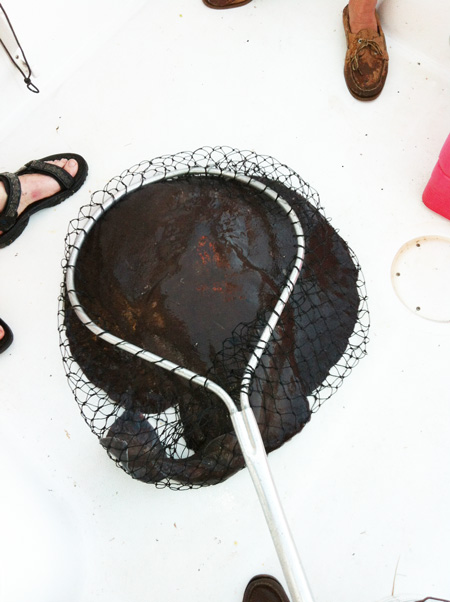 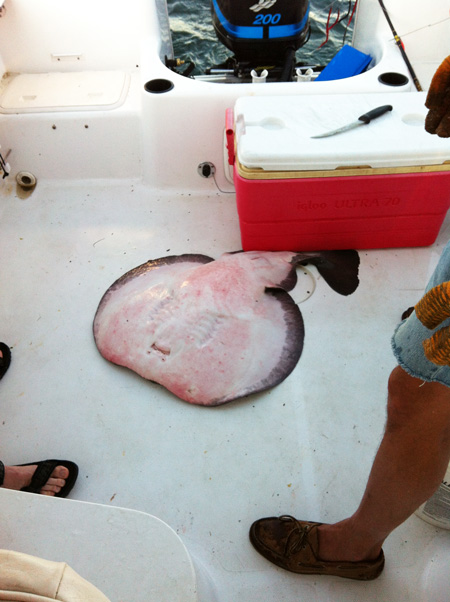 .
Tall Jeff gave us a report from Sunday, “we fished from 7:30 am outside of the mouth yesterday and caught and realeased about 15 keepers. All caught on tsunami metal with a flourescent green tube, and Kastmasters sunk to the bottom. Then drifted bait for the last 2 of outgoing picked up a few more. Not bad for such hot weather.”
.
Joe Ge sent us perhaps the most arty striper photo this year, “Hey there, This 34 incher was caught last (Monday)night in Beverly Harbor. Had two other keepers over 31″ on the night as well. The day before we landed 30 schoolies all on top water in the Salem Harbor.” 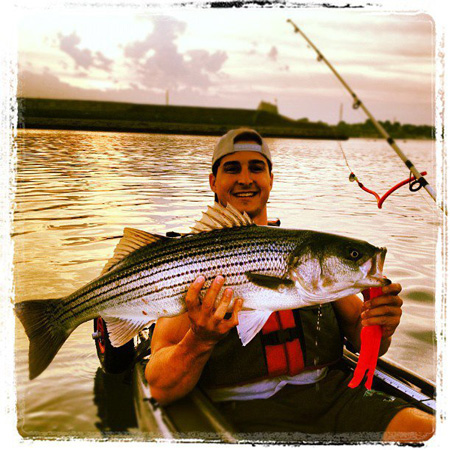 .
Finally, yours truly got out last night and brought a neighbor along, Steve L. He is the guy who first recommended I meet Joe Brotz for my movie way back in 2006. Steve’s my neighbor, and a solid daytime-Joppa-Flats-cut-mackerel fisherman. He’s always shaking his head when I’m leaving at 9pm and coming back in at daybreak.
.
I finally convinced him to come out with me last night, and it turned out to be a hot evening. We got about 15 40″+ fish, including this 48″ long, 24″ girth beauty. Actually kind of skinny for a fish that long. Most of our fish had much bigger shoulders. According to a couple of weight calculators on the web, the fish weighed between 35 and 44 pounds, and was about 17 years old. Revived and still swimming today.
.
The commercial striped-bass season started this past weekend, and those guys were out in force last night, and I’m sure they did well too. 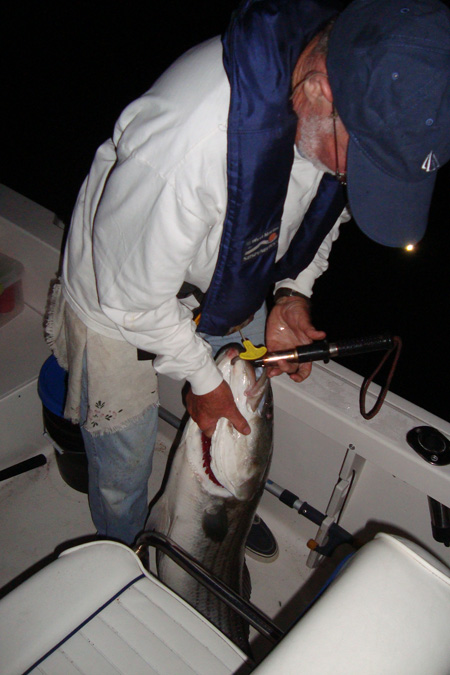 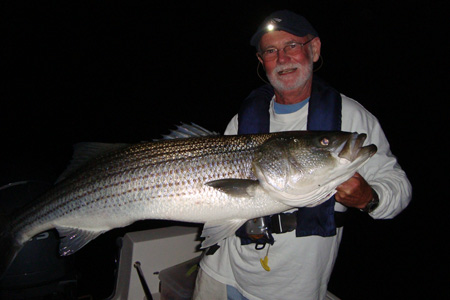 .
I’m usually a catch and release guy, but about twice a year I keep a fish for the freezer, and considering my wife and I have a barbecue coming up in a week, I decided last night was the time this season I’d keep my limit. There will be many happy folks eating these two.
.
– Stickman 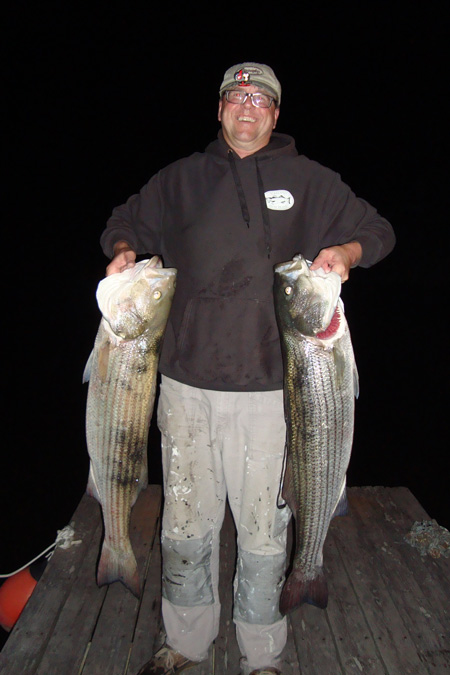