Local Plum Island fisherman John Cook landed his first, and hopefully not last, 51 pound 3 ounce striper yesterday. The monster had a girth of 27″! John’s well know around the island as a consummate chunk fisherman, knowing what spots to hit on which particular time of the tide. Well, he’s usually pretty productive, but not like yesterday when he dragged up this fish. The boat was anchored and John explained that he was about spooled, his captain let some rope out on the anchor to give a little slack, and then slowly John walked up to the bow and then back to the stern grabbing 10 feet of line at a time. The other boaters were polite and moved away when the they saw it was a big fish on the line. Eventually they got it to the boat and it took two of them to haul it over the gunnel. Take into consideration that this fish was caught at in the middle of the day, without a cloud in sight, and it makes it even more of a grand catch.

You’ll see in the second photo that the side fin of the bass is nearly as big as my hand. Enormous. And eye to eye was about 6″, the tail about 12.” It’s the first 50 we’ve weighed in since 2007, and John moves his photo from the small board to the gang of 50’s we have on the rafters. 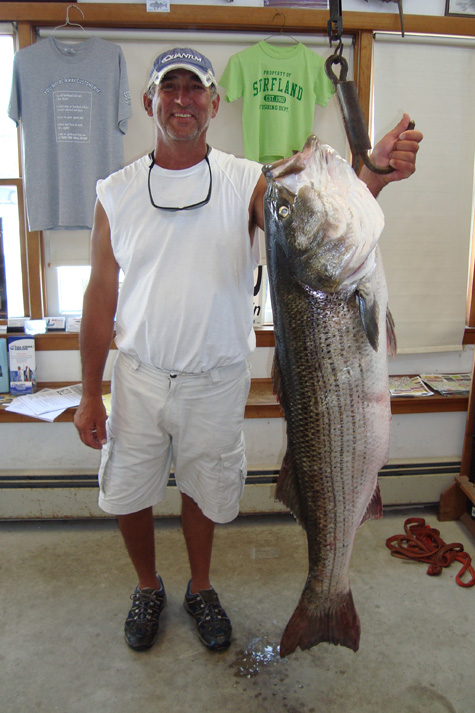 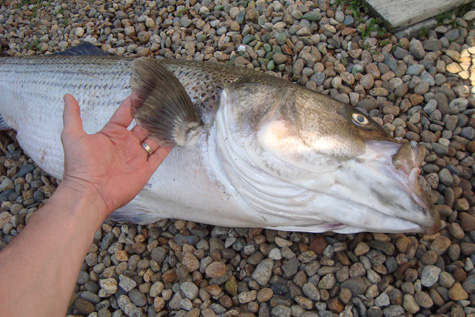 We also weighed in a 32 pounder taken by kayak with a tube and worm. Also, the flounder fishing has been great right out at the south jetty, with a trio of guys limiting out yesterday.