Well not mcuh new to report other than the same old news. Birds working the oceanfront at different times. A mixture of blues and bass underneath. Hard to get them to bite. Also hard to reach them at times due to the fact that a lot of the time the action is south of the center which leads onto the refuge which is closed for the moment. The guys follow them down the beach and then have to stop. Chris Dinardi from Newburyport has been a frustrated fisherman until now ……. Kay sent Chris out along the oceanfront early evening where he caught bluefish on a metal lure until he lost it. Chris then switched to worms and landed himself this 23-12 pounder. And we still have the nighttime bait fishermen producing. 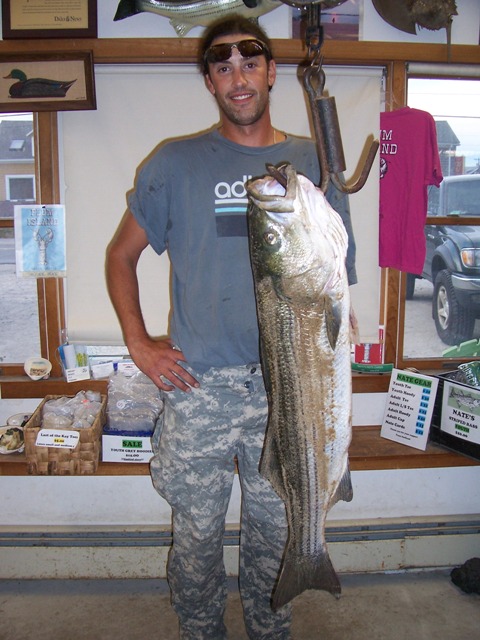 Surfland employee Brendan Wallace also headed out two nights ago to walk the beach and throw a needlefish lure and he got himself a fish that weighed in somewhere in the high 20’s. That one went onto to the barbeque. If you are heading out by the center don’t always go south………remember there is a sandbar just north of the center that at times has fish moving between that and the land.
————————————————-

Boat action. Hmmmm. Since it is commercial season we don’t have as many loose lips around. However, eels are the magic bait for night time fishing from the boat. Tony Pessini from Las Vegas was fising on board The Leading Star, A charter owned by Leo Stevens from Plum Island. He got this 28-2 pounder at night on EELS! 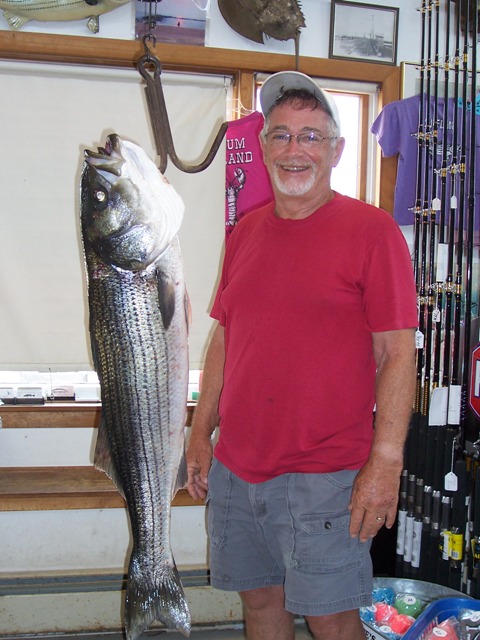