One of our guys was out in the mouth this morning about 5:30 am and reports a pretty good day, especially for flycasters. They saw some good fish being taken, mostly on the fly. Dave Haddon was drifting the outflow from the river and was into good-sized fish. They were showing on the top and seemed to have krill and sand eels up on the top.

Jim Cowhig had his two personal best stripers on a self-tied yellow bunny fly. His knees were weak after the first fish, a 36″, big-headed linesider. Five casts later he got into another cow, this one a 38″ fish, ranging around 21 pounds. Both fish were released. Jim’s cousin Tom was limited to one fish, caught while trolling a big Yozuri Crystal Minnow. Here’s a few photos from the morning, including the big one. 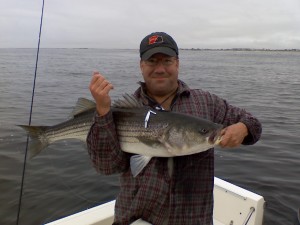 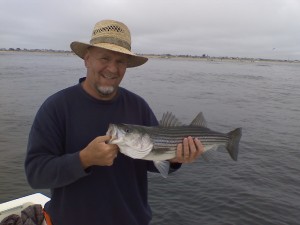 Tommy Hogan was at the mouth of the basin and caught a keeper and a nice bluefish. Chen got a few fish off the beach. So it was a really great day for the first week of July. Might be due to the cool temperatures that the fish are still active. Water temp at the Mouth was only 60º.