July 31 a great weekend to fish

The weather has been cooperating for all our weekend customers. The wind has been strong all day from the Northwest or Southwest, which leaves the beachfront pretty calm, and very pleasant for casting worms, plugging or simply sitting down with a chunk of mackerel at the end of your line. The fishing has been a little slower with the water temperature warming up. Joppa flats has been full of hundreds of fish, but they are very choosy. It’s frustrating to throw an eel or lure into the water and spook 20 fish, but none of them try to eat your offering. Tube and worm fishermen seem to be picking up a few despite the water temp on the flats reading up to 72 degrees. Those who tried a little closer to the main Merrimack Channel said the water was cooler there, about 58 degrees. In theory the fish should be more active there.
.
Live mackerel are still pretty easy to catch at Breaking Rocks off Salisbury Beach, and that’s always a good bait to try in the mouth of the river. Low tide seems to be producing more fish for your customers, with a sampling of bluefish in the mix, sometimes even a sturgeon. Night fishermen are reporting good consistent fishing with many bass in the 36-46″ range being taken. No one will tell me where they’re catching these though. Our facebook friends have good reports on the beachfront.
.
I’m behind in my catch and release photos, so here are a few more with the descriptions form the submitting fishermen:
.
We had an amazing morning on the water on july 20. Grabbed some macs at 415 AM then hit the jetties. Immediate action until we ran out of livies and switched to light tackle. Once the tide started moving we enjoyed one of the best surface feeds that I have seen in years. Here’s a sample of our catch. Most of the fish were 30-36 inches. Boy did it slow down a few days later, but we were lucky to have an epic morning on the 20th. Brandon K. 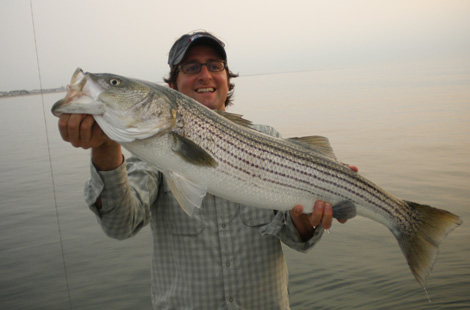 .
Hi james………..Matt and Lisa Halfhill were visiting from Marietta, Ohio. Matt is one of Jim and Dave’s Ohio hunting buddies. Matt and Lisa came for a long weekend to fish, fish, and fish some more. We took them out tube n’ wormin’ out in the sound just before sunset. Lisa caught a lot more fish than Matt, but Matt got the biggest of the evening. I love this picture. We started using eels once it got dark, but not as much success as with the tube. Over the weekend, Jimmy also took them offshore twice to try for little tuna. Had one on for about 30 seconds using live mackerel, but it was not to be………. Two nights of striper fishing and two days of offshore wishin’. They were fished out and tired from the offshore fun in the sun. However, my famous coconut mojitos helped to cure their dehydration. 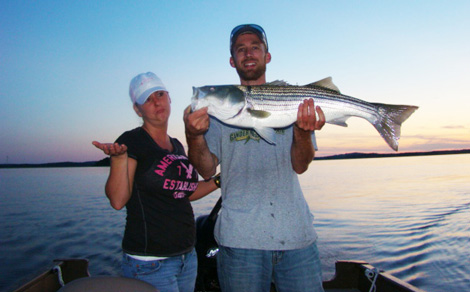 .
Don’t forget, if you have a catch and release photo you’d like to share send it to me: stickman@surflandbt.com and I’ll put it on our blog when I get a chance.