Jimmy from Lowell said that he was out on the beach way before sunrise and had a good time with a dozen or so fish. In the river yesterday a couple of guys had to come back for more bait, seaworms, because they were having lots of fun with schoolies, but it died down early in the morning, so it looks like the sun and the end of the outgoing tide have been best. Only one fish weighed in over the weekend, but overall pretty busy at the shop.

Lots of cows being released by fishergirls. Steve and his daughter were out early and they report,” Dawn came with blues cleared out of the mouth and decent size stripers around. Lindsay decided to join day this morning for some action that quickly proved to be all 25+ inch bass. After a few drifts with easy hook ups on little spin gear she shifted to mainstay fly gear and on second cast rewarded with 34” that fell to a silver and white self-tied mush striped slow. Fish quickly went into the backing before turning to boat. After the pic the fish was back in the ocean for another day. 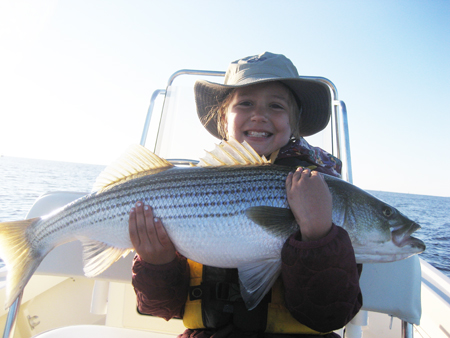 If you’ve got catch and release pics feel free to send us the story and the photo, we’ll put them up here. e-mail them to stickman@surflandbt.com