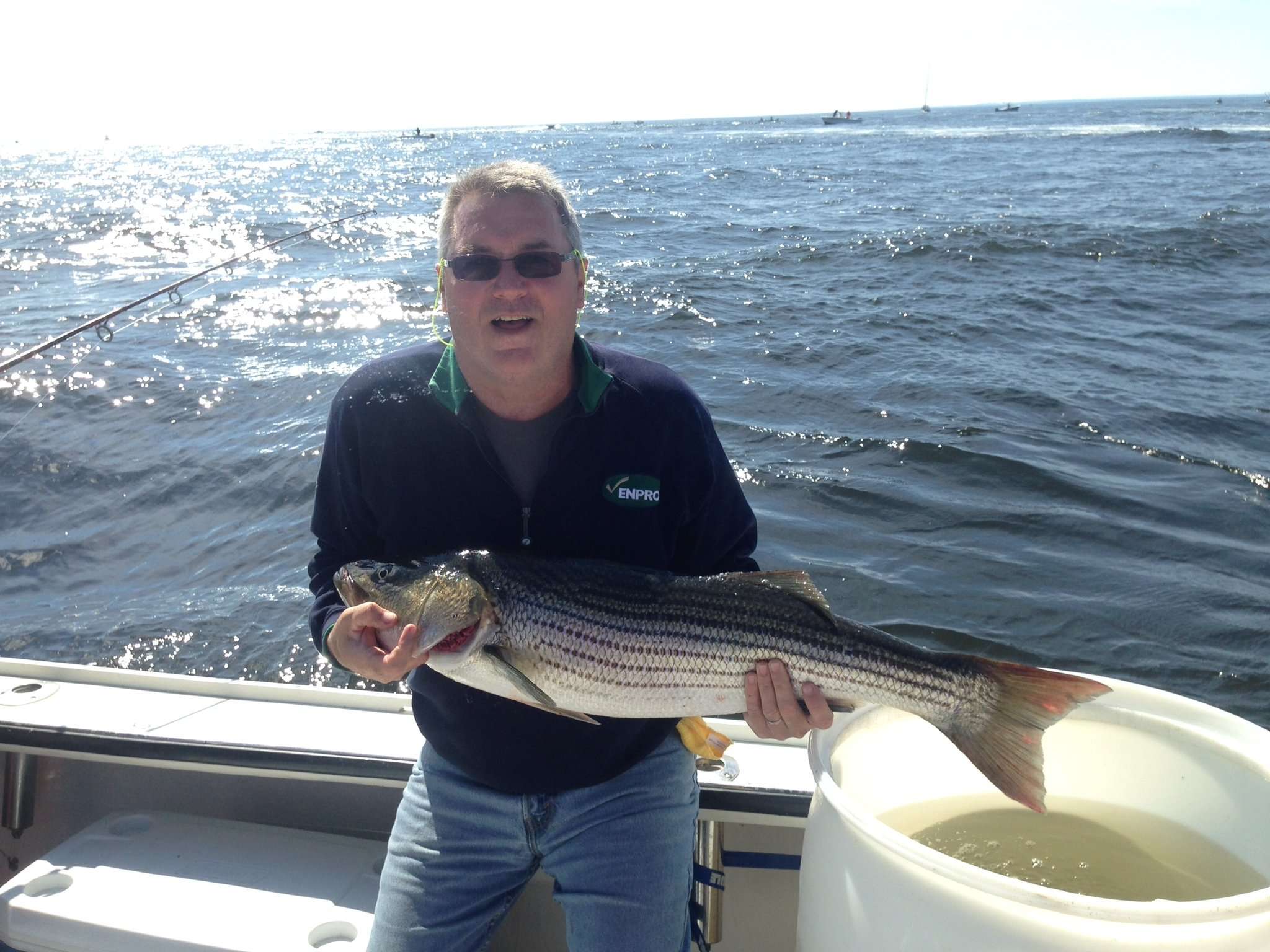 The fourth was celebrated in style by Steve Mitchell from Plum Island who cam into the shop in the am, before the weather struck, and had been heading out of the basin to fish Joppa. Just outside the mouth of the basin he hooked into this nice fish using a Sluggo during the top of the outgoing. His barbeque was set for the day.

Rain, thunder, buckets of rain, wind, more rain, more wind! But it did clear out eventually and with the west wind blowing,it flattened the ocean out fast. Thunder.hmmm. had a fisherman send me a picture of what happens when you leave your rod outside while you go sit in your car and wait out the weather. Don’t trythis at home kids!

On Sunday I got an email from Gary Murphy of ENPRO Services, Inc., an environmental company located in Salisbury MA.  He went out with another ENPRO employee and his family on Tom Sawyer Charters out of Newburyport. He says they left the dock yesterday at about 6:30am and headed straight out the mouth to a couple of humps that the captain said the mackerel seem to be congregating at. The filled the tank with some live mackerel and were back inside the mouth of the Merrimac for the mornings outgoing tide. Here’s Gary with one of the fish they caught. He says they hooked about 10 fish, landed 7 and that most fish were in the 32-36″ range. Nice day of fishing! 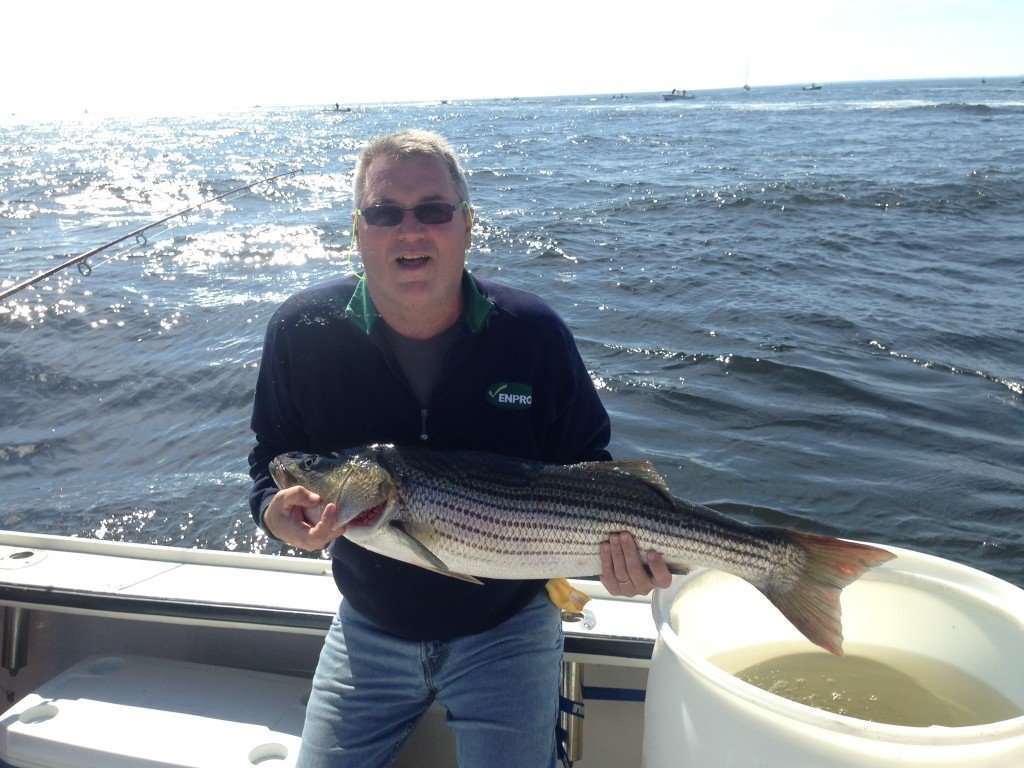 On Monday, we had the famous, infamous Al. The Hobie kayak master out on Joppa “riding the tube”! Al came early in the am for the high tide. He got 21 fish on 24 worms. Four of the fish ranged 31-33 inches and the rest were in the high 20’s with two babes mixed in. He said he saw lots of fish, lots! The only reason he had to stop fishing is because he ran out of worms! But Al came back again today and caught another 17 fish. RIDE THE TUBE!!!! 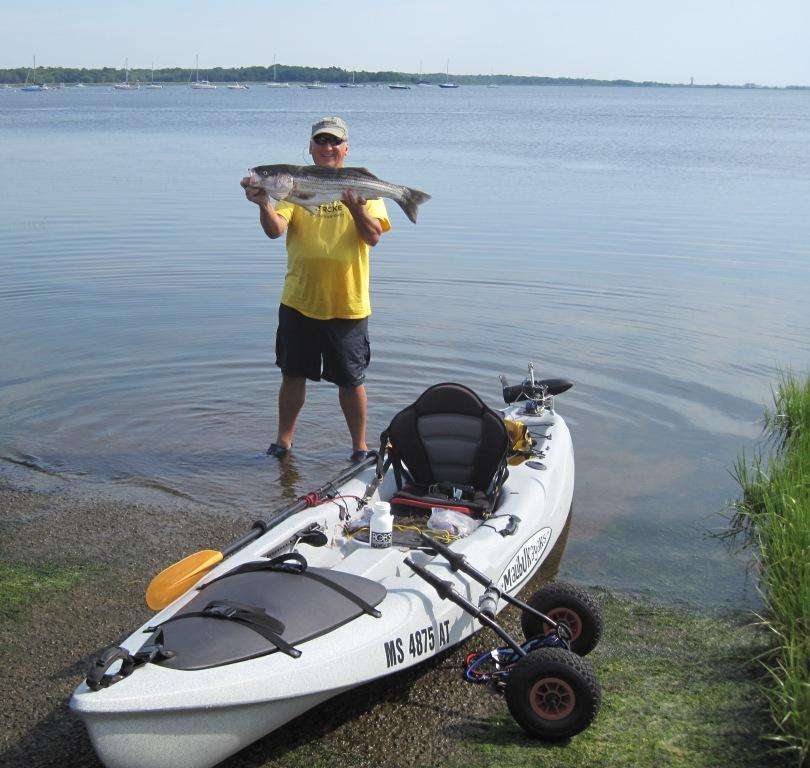 Surf fishing has been a mixed bag. Some of the low tides in the river are producing some fish in the high 20 inch range. Also Sunday we had a fisherman who was on the front beach come back for some more bait. He was using herring and got a nice fish, but was just undersized so he lived to swim another day!