The fish ran the beach again yesterday afternoon.  But unlike the last few days, these fish were being a bit more finicky.   The Kelly’s came last night and got to the beach about 7:30/8:00 and the fish were still running the beach. There were acres of fish Ed said but they were not biting. They threw everything they had in the tackle box at them but couldn’t get them to strike.  This action was all during the outgoing tide. Later on during the incoming tide the Kelly’s and other groups  of fishermen got a lot of fish, all sizes using worms.  Then this morning during the outgoing tide Ed hooked into this 21-8 pounder at about day break using worms. And now it is about 1:00 in the afternoon and we just had Larry Odgen from Newburyport in. He was walking the oceanfront casting lures and said the was a massive school of fish the came into shore near the refuge area but he couldn’t get them to bite.

Boat news….had one fisherman tell us he got into a lot of flounder along the oceanfront south of the jetty in the 30-35 feet range. The guys are still doing well on stripers and small bluefish out front along the ocean and then also inside the mouth on the outgoing, especially if you can get up early enough, go get some mackerel, and then live line them inside! 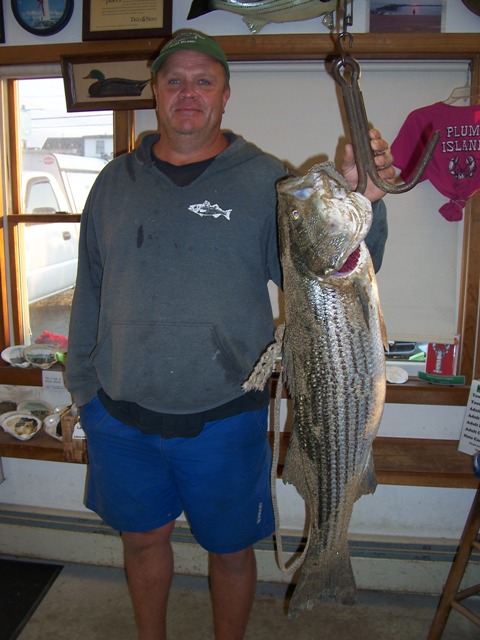