Only weighed in a 14 pounder yesterday, so kind of slow. We know the kayak guys are doing well, but the weather was kind of snotty last night and we didn’t see too many boats out. Neil and Nate, who politely do not describe their location, had a great time yesterday. They said for a couple of hours the bass would only follow their plugs and not hit. Eventually it turned on and they had a great time for themselves. Knowing those two that means a good number of big fish.

By the way, Neil Allen, who was out with Nate yesterday, is the craftsman behind the Striper Sniper line of custom made plugs. You can see his story at ntacustom.com. His new Kona Popper was profiled in a recent On The Water magazine article. He’s also a master rod-builder and has been pumping them out for a long time. Here’s a photo of both Neil and his Kona Popper. 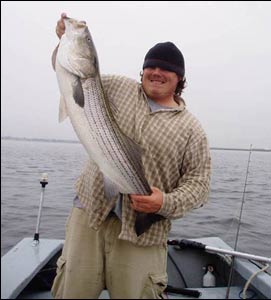