Posted at 12:41h in Catch and Release by Stickman 1 Comment
0 Likes

Here’s this weeks crop of photographs our merry band of fishers sent me.

Finally, I have some photographs from one of my own trips. Jim E Cow, U-boat, and I set out on the Sparticus at 4:45 this morning and were off the North Jetty by the time the sun peeked over the ocean. Within a few minutes we were in busting fish that appeared to be on small bait at the surface. We hooked up immediately, with Jim E Cow grabbing a nice keeper on the fly within a cast or two. U-boat also had luck with a white Jumpin’ Minnow on the spin-cast. All of our fish were Catch and Release.
.
The schools were spread out from the Jetty all the way up to the Salisbury Beach Pavillion on the strip. The whack-a-mole action was great all morning, zipping to the birds, catching a few fish until they pushed down, and then off to the next flock of birds. I was held fishless for nearly 90 minutes, but then connected quickly with two keepers using a white 8″ FinS with a jig head. I found the faster retrieve was more effective than my usual slow twitchy one.
.
We did see some bigger bait among the schools. Some 6-8″ guys were jumping about, and one of our buddies said one of his landed bass coughed one up. We even scored a lovely seagull entwined in some braid. Released disheveled but unharmed. (Hint: Seagulls flop around much less if you take your cap and cover their head.)
– Stickman 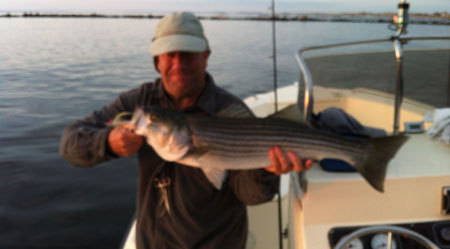 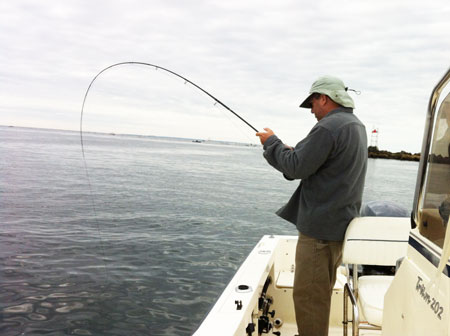 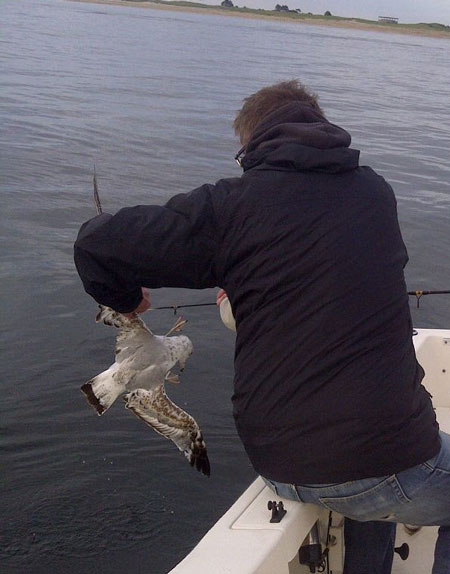 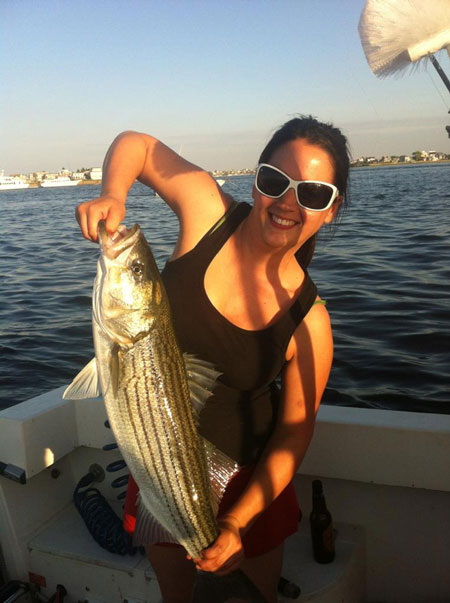 .
.
Several of us were wading the sandbar during last night’s electrical storm, and survived to tell the tale. This was taken looking toward the North Jetty. Although the conditions seemed perfect for some large fish, only one keeper size bass was landed.
– Ralph Upchurch 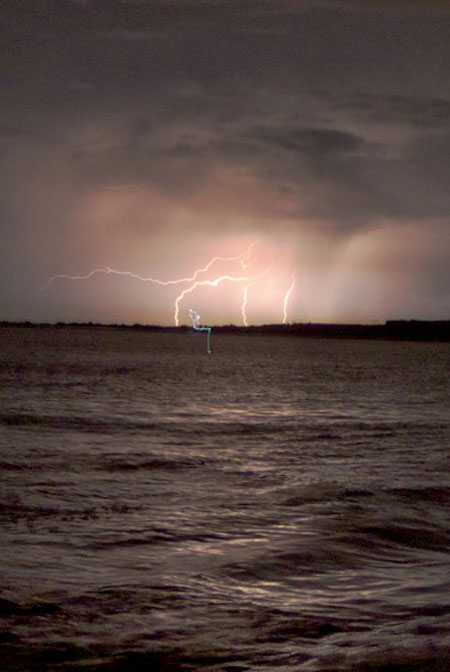 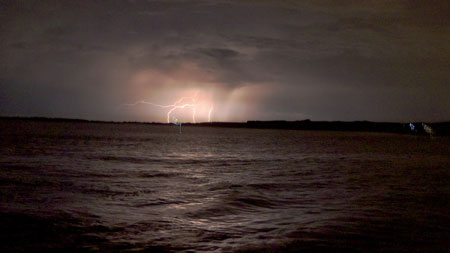 .
.
Catch & released these doubles with my Dad today. Hit’em good outside the mouth on live macks. Love your site and the store!!
– Rob Venuti, Melrose MA 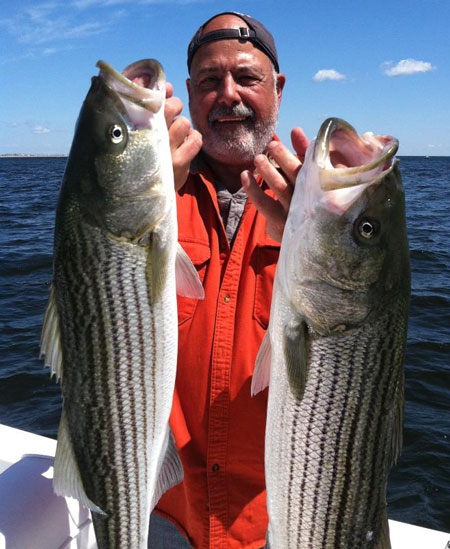 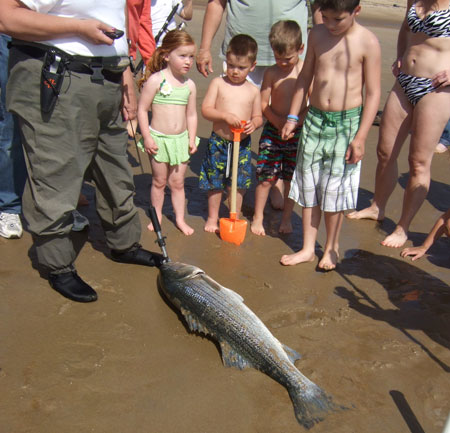 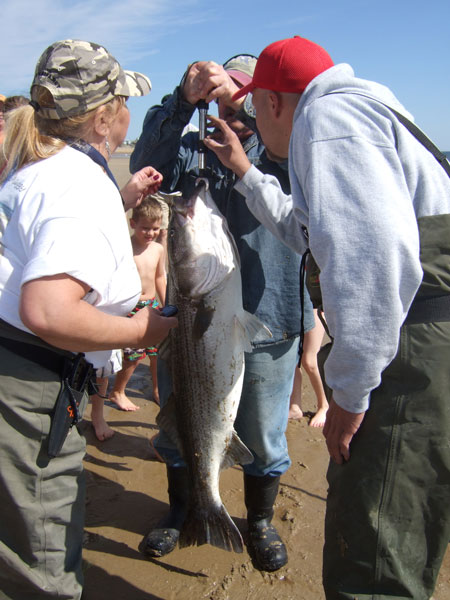 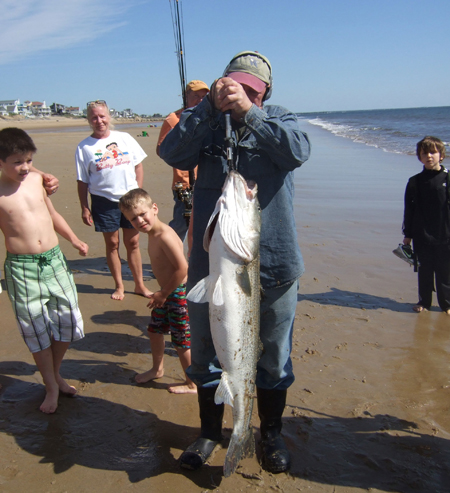 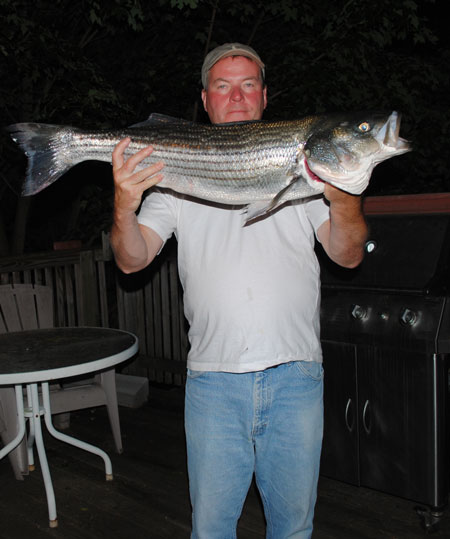 .
.
Visitor and former Newburyport resident Peter Balmer successfully landed and released this 36″ beauty drifting outside the mouth fishing with S. Kerns. Method of angling included sluggo dipped in Swiss Secret sauce (not chocolate). According to Peter back in the home country he would be featured in a parade if such a fish was caught. Rumor has it Peter will be back during the Fall migration, business meeting or not, as day to day life with pike is not the same. Should add PS: peter has learned “boss” approves another visit…
– S. Kerns 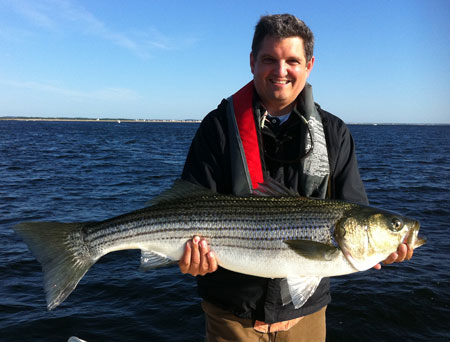