You may have heard about the little spill they had up the Merrimack River this spring. The Town of Hooksett Wastewater Treatment Plant overflowed into the river. Inside the plant they used silver-dollar sized plastic discs to help break down the waste. Well they released, depending on who you talk to, between 4 and 25 MILLION of these discs. The cleanup has been ongoing ever since, with some of the plastic found in Gloucester, Beverly, Cape Cod, and even Nantucket. It’s estimated they are on their way to Ireland now, but there are still plenty around our area. I find 10-15 of them out my back door on the Plum Island Basin every week.
.
Well, Surfland has the answer! When you find the discs, bring them down and we’ll show you how to turn them into an excellent pogie imitation! This is Mike McCormicks brilliant, and creative vision.
. 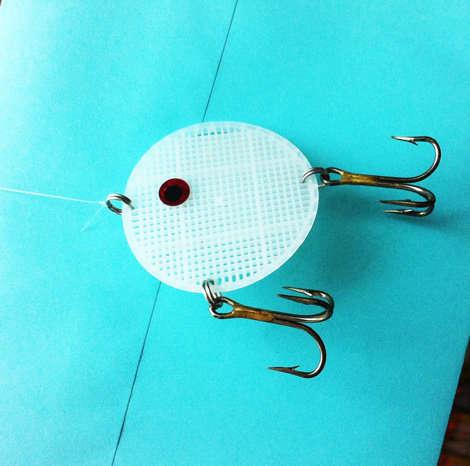 By Dave Rogers
Staff writer
.
PLUM ISLAND — In the three months since millions of wastewater treatment disks escaped from a Hooksett, N.H., sewage facility into the Merrimack River and floated all the way to the Greater Newburyport area and now Cape Cod, they have caused headaches for thousands of people and cost more than $1 million to pick up.
.
But at least one Plum Island business has found a way to poke some fun at the unfortunate situation. Recently, employees at the Surfland Bait and Tackle Shop took at least two of the half-dollar-sized disks, added some hooks and turned them into not-for-sale lures.
.
Longtime owner Kay Moulton said a customer brought a couple of disks into the store a few weeks ago, which prompted a creative employee to add multi-pronged hooks and then string them from the ceiling using fishing line.
.
“Oh yeah, they just laughed,” Moulton said when asked about customer reaction to the lures.
.
Buoyed by the positive reaction to the disk lures, another employee took a photo of one and then posted it, along with a newspaper article on the accident, on the store’s Twitter account Friday.
.
Newburyport resident John Liss, who, along with his wife, Pauline, was in Surfland Sunday to have one of his poles serviced, said he loved the idea.
.
“It was an extremely clever idea,” Liss said. “I could have looked at them all day and never thought of that.”
.
After a few days hanging from the ceilings, the lures were taken down and then given away to customers.
.
“We’ll have to make some more,” Moulton said, with a chuckle.
.
An estimated 4.24 million of the plastic disks, used to capture and then eat human waste bacteria, escaped from the recently renovated wastewater treatment facility on March 6 when one of the tanks overflowed with water after a prolonged period of rain. In the days that followed, the disks made their way down the Merrimack, washing onto the shores of Newburyport, Plum Island, Amesbury, Seabrook, Salisbury and other Greater Newburyport communities. More recently, the disks have been spotted near Nantucket Island, and an expert in tides said the disks could someday end up in England.
.
“I can’t imagine how they (the town of Hooksett) can allow that to happen, but it is what it is,” Surfland employee Brendan Wallace said.
.
So far, according to Enpro, the Newburyport company hired by the town of Hooksett to remove the disks, about 3.5 million of the disks have been collected, as crews comb an estimated 135 locations between York, Maine, and Cape Cod. But an Enpro official believes it may be virtually impossible to pick them all up and encouraged those who see them to pick them up.
.
Initial tests showed the disks were contaminated with very small levels of human waste bacteria, about the amount found on a typical doorknob, but not enough to be considered hazardous. Indeed, officials at the Massachusetts Department of Environmental Protection consider the disk a litter issue rather than a health one.
.
Pauline and John Liss said they both see the disks on regular occasions including Saturday, when Pauline Liss saw dozens as she was walking her dog near their Plum Island home. John Liss said he has also seen hundreds of them inside the Plum Island basin, the small body of water just west of the island.
.
“You just can’t escape them,” Liss said.
.
An obviously concerned Moulton also encouraged those who happen to see the disks to pick them up, saying they shouldn’t be frightened by them.
.
“I couldn’t get over the reaction from some of the people: ‘disgusting, don’t touch them,'” Moulton said. SClB