Considering how much bait has been around for the last few weeks, it’s no surprise that there have been a few reports of cutoff lines by bluefish. And it is the middle of June too, with fishermen reporting catching hundreds of mackerel at the usual haunts: Breaking Rocks and Speckled Apron. So many hungry bluefish zipping in is not surprising.

The flounder bite is good just off the beach. It’s pretty localized. The difference of 50 yards can get you nothing, to skates, to flounder. But they are tasty! Even the skates if you prepare them right.

This morning was good at the mouth. Daybreak is roughly slack high tide, so the morning sunrise is followed by a good outgoing tide. Here are three guys who had a nice time. All released. 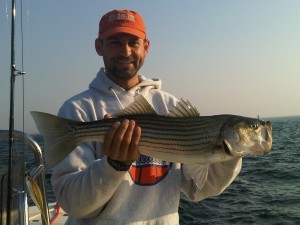 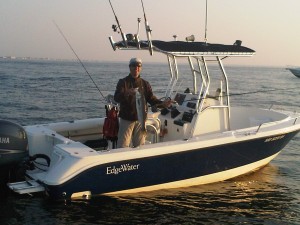 Brian Hanrahan connect finally with a 25″ striper for his new personal best on a flyrod. It was quite a battle and than released for another day 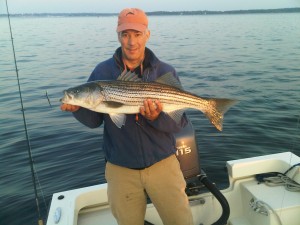