Today is a great day to fish. It’s raining hard and the wind is moving from the South. Although it’s not a basking in the sun day, these types of mornings usually bring up the stripers, so butch up, put on your rain gear and get out there.

Yesterday was kinda slow on the river. There were schoolies off the North Jetty at daybreak, and some  popping fish up and down the river early too. We saw a bunch of schoolies being taken at high tide near the Icebreaker in the morning too. Not too many customers came in last night or this morning wo our intel is slim.

Yesterday we asked for some Catch and Release pictures that we can share, as we mostly have access to fish being weighed in. A couple of folks were nice enough to share.

This is from Bryan Fairweather and his nephew Chris from Westford,MA. It’s a pic from 2005 caught off joppa using light tackle, 12 pound test and sluggos, the fish was released to fight another day. 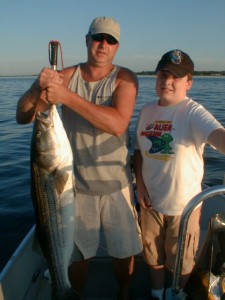 And we got this one from Jim Cowhig. It’s a keeper striper on the fly he caught off Magnolia Rocks on Tuesday. Caught and released back into the foam. 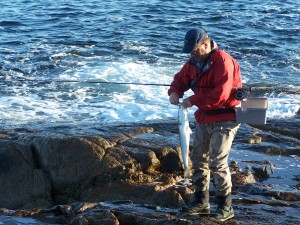 Keep them coming and we’ll keep posting them. The details are nice too. stickman@surflandbt.com