June 21, Releasing the big…..sturgeon on the fly

The story behind one of the couple of sturgeon caught this season:

My wife Carol Wright caught it on the morning of June 15. Sure made for an interesting morning on the river. Fishing was slow and we’d made a few drifts on the falling tide without more than a couple small school fish to show for it, so we were thinking of heading back to the dock and going back out for the afternoon tide. Then Carol hooked and released a nice 31-inch striper and we thought maybe things were picking up. I was getting ready to start up the boat and head back to the top of the flat for another drift when I saw Carol’s rod bent over hard on what was clearly a heavy fish. For a minute or two, I thought it might just be bottom because the line stayed at the same sharp downward angle instead of running out the way it normally does when a large bass streaks off toward the channel. Finally it began to move, but it stayed deep even when it began to circle the boat and took considerable effort to work it up to the surface. When I first saw color, I was pretty sure we had something different–it was dark and the body had an odd shape. I thought it might be a small shark with its large tail and flat pectoral fins. But as I leadered it, I saw the three rows of armored peaks running down its back–almost all the way to the tall asymmetrical tail swinging in the current about 4ft behind it and guessed it might be one of the Merrimack’s phantom sturgeons. So, taking care not to stress it, I was able to lift its head gently by holding the leader straight up to reveal the inferior (downward facing like a bonefish’s or carp’s) mouth and just pop out the hook by grabbing it bend with pliers.

Having gotten up at 4:15 AM, Carol was typically non-impressed as she said, “Now can we go to Greta’s (bakery) for coffee and a cinnamon roll?” 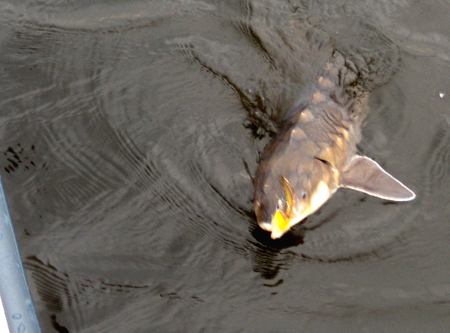