Well the last few days have been up and down. The Kelly boys headed home Saturday, but I got a text from Ed tonight saying that for the record the night bite was on for them later in the week. While the week started off on the slower side for them, they did well on Wednesday-Friday with several keepahs up to fifteen pounds but said there were very few fishermen out on the beach at night. Action during the day from the beach has been slow except for the bottom of the tide in the river.
On Saturday we had a few come in from the boats. Charlie Ashworth pictured here caught this 39.5 pounder using mackerel. Seems that the mackerel have been in different places for different people. Again, we have heard of mackerel from Breaking Rock to the Isle of Shoals. Some days a lot, other days very scarce. What we are hearing is the there has been some pogies outside the mouth along the oceanfront. 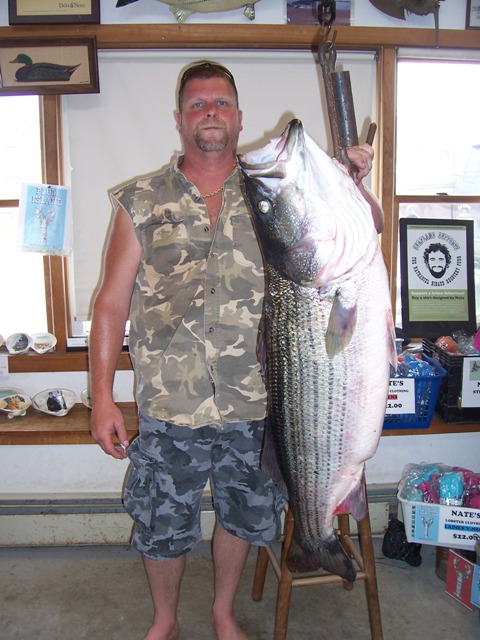 On the topic of flounder. The only reports that we have gotten are from the boat guys. They seem to be getting some flounder both inside the river and outside south of the jetty. The beach fishermen have had a tough season so far from the beach. Here’s hoping that will change.

The party boats got into some bluefish today along with a few other boaters. Never heard wether the hit the beach, sorry.

And Joppa…..lots of fish, but lazy fish!