June 26 from the boat

Well not many fishermen out on the surf today sooooooooooooooo… not much action from the beach today. Most of the fishing has been done from the boats………and all before the rains came this afternoon. Dr. Tsao, father to our very own Nate Tsao, was out in the boat this morning. He hit the flats early for the high tide but didn’t hook into a fish until two hours after high. He saw lots of fish, but again, getting them to eat has been the problem as of late. Well two hours into the outgoing is when he hooked 3 fish, biggest was a 32″, using a Sluggo. Then it went quiet and he headed out the mouth of the river north. There he ran into a huge school of pogies…………………yes pogies. He was amazed at how big the school was. He snagged a few and tried for some bass. He said the bass were below down deep and they seemed to be on the outskirts of the pod. Every once and a while he would see and hear a huge splash as a striper would break the surface. This action was all at the bottom of the outgoing tide. Just to prove that they were pogies, here is a picture of a few he kept. 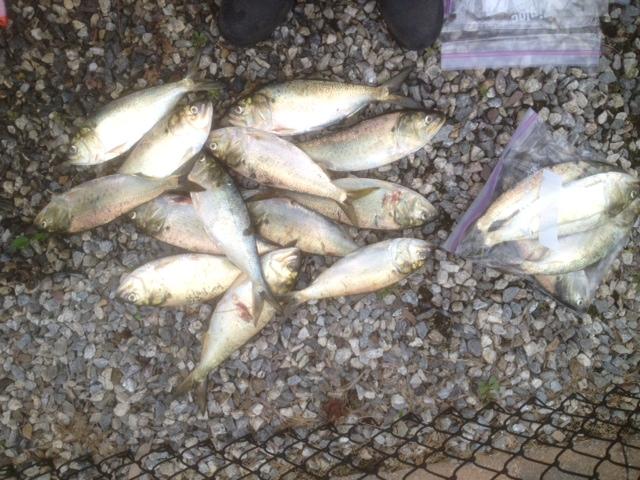 Other action today from the boat had Judy Sarkisian from Chelmsford weighing in this 11 pounder that was taken in the mouth of the river using mackerel. They got another fish also, but they said that as soon as the tide turned to come in, bluefish came into the mouth. They were mediumd sized blues. 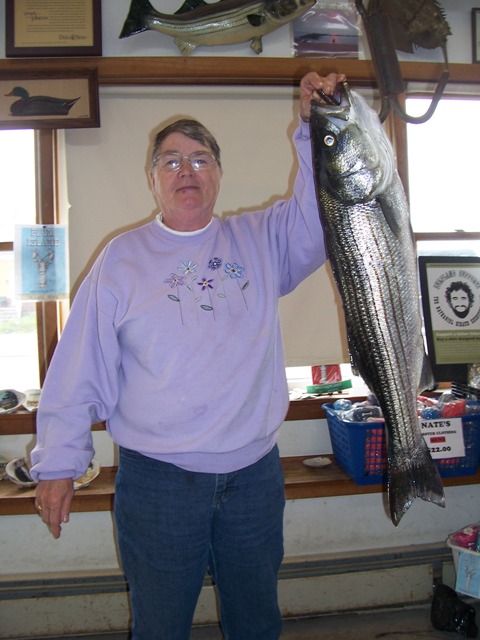 And one last word from the boaters. The flounder were hitting outside the mouth…..south. So time to get cracking on the flounder…………baked flounder, fried flounder, fish tacos made with flounder, etc. Mmmmmm…………many ways to eat flounder!