Well, the weekend was kind of slow here on the island. Of course that depends on how you look at it. We only weighed in one fish, and Tallman says he got a few schoolies, but no keepers. There was a rumor of some decent fish on the flats, and we spooked a few last night (one had a human-sized head, no really , I swear) Anyway we didn’t see a whole lot of fish taken. 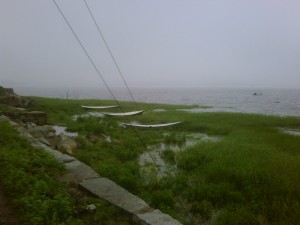 Last night we went out with a few flycasters at high tide through the evening. We caught small fish, really small fish. A couple of the stripers were about 10″. Now you could look at that as a bust, but with the concern about the entire population of stripers in peril because of the lack of small fish, we were happy to see them. We got a few in the river casting to the weeds, and we found a scattered bunch of blitzing fish north of the mouth. Among those were some tiny bluefish. About the same size as the schoolies.

Let’s talk about the weather. The skys have been rainy, the fog tick, and the grey skies keep the sun away. But all that works to great advantage for fishing. Keeping the water temperature down. It was only 67º on the flats yesterday afternoon, and 60º in the mouth. Last year the flats temp was near 75º in the daytime, making those stripers pretty sluggish. there have been a lot of stories on Reel-time of fish refusing flies and lurse, so at least we’ll keep them cool, and maybe they’ll turn on once more before the inevitable July slowdown.